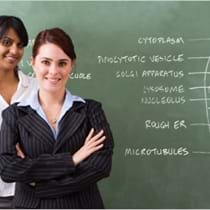 Presented by the Science Education Initiative, NYU Poly and the National Consortium of Specialized Secondary Schools of Science, Mathematics, and Technology

Join the Academy and Polytechnic Institute of New York University as we discuss how teachers can identify, create, and manage partnerships with scientific institutions to improve K12 Education. Participants will learn about typical resources they can access at colleges and universities and how to effectively work with professors and young scientists. Panelists will share their insight and advice to teachers on the pros and cons of working with partners.

The event is part of the National Consortium of Specialized Secondary Schools of Science, Mathematics, and Technology's Invention, Innovation Summer Institute hosted by NYU Poly.

Please join for a wine and cheese reception before the event from 4:30pm-5:30pm.

Ben Esner is the Director of K-12 STEM Education at NYU-Poly, where he is responsible for creating a Center for K-12 STEM Education at the University. The Center designs and implements creative and innovative programs that provide opportunities to students in STEM studies across a range of disciplines in both formal and informal learning environments.

Prior to joining NYU-Poly, most recently, Ben held the post of Senior Vice President for Programs at Brooklyn Community Foundation (formerly Independence Community Foundation), an institution dedicated to improving life-outcomes for residents of Brooklyn's diverse neighborhoods and, in particular, high educational attainment for the borough's low-income students. Ben was also the Deputy Director of Independence Community Foundation, joining the staff shortly after that entity was founded; in that role, Ben helped develop and nurture the initial grant programs of the Foundation as well as the organizational infrastructure of a high-functioning, successful not-for-profit.

Ben is a founding and current Trustee of three public charter schools serving the communities of Bedford Stuyvesant, Brownsville, and Ocean Hill; these schools are highly successful at achieving an educational mission and are affiliated with Uncommon Schools, one of the nation's most respected and accomplished not-for-profit charter management organizations. Earlier in his career, Ben was Chief of Staff to the Commissioner of the New York City Department of Environmental Protection and Assistant to the Brooklyn Borough President for Environmental Affairs.

Samantha Freeman is the project director of the Harlem Ivy Program. She develops and manages out-of-school-time programming for 400 students in low-performing schools in Harlem, with a focus on science-based service learning experiences in the students' community. Ms. Freeman has a master's degree in Early Childhood and Elementary Education from New York University in 2004. Before joining the OSCP, she spent four years coordinating education programs through the California Nano-Systems Institute at the University of California, Santa Barbara. During her time at CNSI, Ms. Freeman developed and expanded a series of after-school science clubs targeting public school students in Grades 3-12, and coordinated a summer research program for community college students. In her outreach and engagements efforts she has taught at public schools in California and New York City.

Dr. Vikram Kapila is a Professor of Mechanical Engineering at Polytechnic Institute, Brooklyn, NY, where he directs an NSF funded Web-Enabled Mechatronics and Process Control Remote Laboratory, an NSF funded Research Experience for Teachers Site in Mechatronics, and an NSF funded GK-12 Fellows project. He promotes NASA relevant projects to undergraduate and graduate students as an affiliate director of the New York Space Grant Consortium.
He has held visiting positions with the Air Force Research Laboratories in Dayton, OH. His research interests are in linear and nonlinear control, aerospace control applications, and mechatronics. He received Polytechnic's 2002 and 2008 Jacob's Excellence in Education Award and 2003 Distinguished Teacher Award. In 2004, he was selected for a three-year term as a Senior Faculty Fellow of Polytechnic's Othmer Institute for Interdisciplinary Studies. His scholarly activities have included one edited book, 4 chapters in edited books, 1 book review, 39 journal articles, and 88 conference papers. Moreover, he has mentored 67 high school students, 86 high school teachers, 21 undergraduate summer interns, and 11 undergraduate capstone-design teams, and graduated seven M.S. and four Ph.D. students.