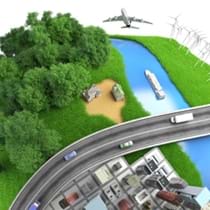 In 2010 New York State passed the Smart Growth Public Infrastructure Policy Act to ensure that state infrastructure funding is consistent with smart growth principles. This Act requires investment priority be given to existing infrastructure facilities which are consistent with local governments' plans for development. These principles are consistent with goals for climate change mitigation and adaptation and smart growth actions. This panel for the New York Academy of Sciences will explore the implications of legislation for smart growth, and discuss how multiple layers of government coordinate investment and growth decisions to efficiently use existing transportation facilities. These issues are critical for meeting the challenges of carbon reduction and climate change adaptation.

For a full list of sponsors, please consult the Sponsors Tab.

Gerry Bogacz has been the Planning Director for the New York Metropolitan Transportation Council (NYMTC) since 1997. NYMTC is a regional council of governments which is the metropolitan planning organization for New York City, Long Island and the lower Hudson Valley. NYMTC is responsible for planning for the use of Federal transportation funding in its planning area. Prior to his work at NYMTC, Gerry spent ten years as the Director of Planning for the Westchester County Department of Transportation. He holds a Master's degree in Urban Planning from NYU and a Master's degree in Public Affairs from Fordham University.

Peter Fleischer is the first Executive Director of the statewide, 44-member Empire State Future coalition. He started in this role in February 2008. Empire State Future seeks the economic revitalization of New York's main streets, town centers and urban areas by advancing the principles of smart growth in land use and development decision-making. Peter holds an BA from Harvard and an MBA from the Yale School of Management. From 2003–2007, Peter was the Senior Vice President at the Empire State Development Corporation's Governors Island subsidiary. Prior to this, he was a Transportation and Environmental policy advisor to the New York City Mayor's Office. He also served as Assistant Commissioner for Policy at the NYC Department of Transportation. Prior to his government service, Mr. Fleischer worked in strategic planning and private banking at Shearson Lehman American Express. A long time resident of Manhattan's West Village, he now lives in downtown Albany.

David King is an Assistant Professor of Urban Planning. His research explores transportation planning and finance, social equity, land use regulations and the political economy of policy innovation. As part of this research he has written about the phenomenon of cruising for parking, used spatial regression techniques to analyze travel behavior and explored the co-development of transit systems and land development. He also studies how public policy influences the adoption of new technologies to address congestion, energy and environmental concerns. These issues are the focus of Professor King’s teaching through his courses covering planning techniques and methods, transportation and land use planning and transport policy.

David holds a PhD in Urban Planning from UCLA and a Masters of Urban and Regional Planning from the Humphrey School of Public Affairs. He joined the faculty of the Graduate School of Architecture, Planning and Preservation at Columbia University in 2008.