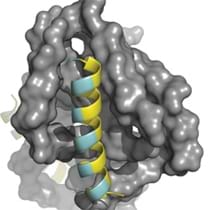 The Chemical Biology Discussion Group brings together chemists and biologists interested in learning about the latest ideas in this rapidly growing field. It provides a forum for lively discussion and for establishing collaborations between chemists armed with novel technologies and biologists receptive to using these approaches to solve their chosen biological problems.

Postdocs from the chemical biology community in the New York area have organized this special meeting, which brings together three diverse speakers to address recent breakthroughs in synthetic biology and organism engineering, including research on the design and application of "foldamers," metabolically engineering microbes for the production of biofuels, and fragment-based de novo design of ligands and their applications to biology.

Bryan J. Cowen was born in Suffern, NY, in 1981. He received his BS in Chemistry from Binghamton University in 2004, where he participated in research with Professor Susan L. Bane. He then joined the laboratory of Professor Scott J. Miller and obtained his PhD from Yale University in 2009. His graduate work involved the development of amino acid and peptide-based catalysts for enantioselective carbon-carbon bond forming reactions utilizing allenoate substrates. He is currently an NIH postdoctoral research fellow pursuing the synthesis of novel saponin adjuvants in the laboratories of Professor David Y. Gin at the Memorial Sloan-Kettering Cancer Center.

John Rakus received his BS in Biochemistry and Molecular Biology from the University of Richmond. He proceeded to the University of Illinois at Urbana-Champaign, where he received his PhD from the Biochemistry Department. There he studied the evolution of enzyme substrate specificity in the enolase superfamily in the lab of Professor John Gerlt. These efforts led to important contributions toward the accurate identification of enzyme substrates based on computational prediction and docking. He is pursuing his postdoc appointment in the lab of Professor Lara Mahal in the Department of Chemistry at New York University. There his research is focused on identifying previously unknown bacterial carbohydrate binding proteins and studying global carbohydrate expression differences across a wide library of cancer cell lines.

Anna Takaoka received her BA in Biochemistry from Hunter College of The City University of New York in 2006. She is currently pursuing her PhD in Biochemistry at The Graduate Center/Hunter College of CUNY, under the guidance of Professor Akira Kawamura. Professor Kawamura's group has established a screening technique called "Biomarker-guided screening" to uncover the hidden potential of natural products, and Takaoka has been working on isolation of immunostimulatory compounds contained in an immune-stimulating herbal formulation, Juzen-taiho-to (JTT). Her research focuses on identification and characterization of immunostimulatory compounds isolated from JTT.

Kelvin Tsou earned a BS degree in chemistry from the University of North Carolina at Chapel Hill in 2002. His undergraduate research was under the supervision of Professor Marcey Waters to investigate the energetics of cation–pi interactions in aqueous media using alpha-helix models. Under the direction of Professor Andrew Hamilton, his doctoral research at Yale involved the development of protein surface receptors based on macrocyclic scaffolds for modulation of protein–protein interactions. Currently, as a postdoctoral fellow with Professor Howard Hang at The Rockefeller University, his work has been concentrated on the discovery of new antivirulence agents for Gram-negative bacteria to combat emerging or resistant infectious diseases.

Wan Seok Yang received a BS in Biological Sciences from Korea Advanced Institute of Science and Technology (KAIST, South Korea), attended graduate school at KAIST, and earned a PhD in Cell and Molecular Biology. He was a postdoctoral fellow in the laboratory of Cheol Woo Kim, a renowned expert in cancer pathology and molecular therapeutics. After completing mandatory military service, he joined the laboratory at Columbia University of Brent Stockwell, a world expert on chemical genetics. Yang identified small molecules that are selectively lethal to cancer cells with oncogenic-RAS mutation and characterized the mechanism of drug action through chemical genetics approaches. He was appointed an associate research scientist of Columbia University in 2007 and continues to work with Stockwell to develop anticancer drug leads. Yang’s research interests include synthetic lethal screening using small molecule library, exploring cell death space using small molecules, in silico based novel ligand discovery, and metabolite profiling.

Samuel Gellman is the Ralph F. Hirschmann Professor of Chemistry at the University of Wisconsin–Madison. He earned his AB from Harvard University in 1981 and his PhD from Columbia University, under Ronald Breslow, in 1986. After an NIH postdoctoral fellowship at the California Institute of Technology with Peter Dervan, Gellman joined the faculty at the University of Wisconsin–Madison in 1987. In addition to foldamer structure and function, protein structure is a major interest in the Gellman group, especially examination of beta-sheet secondary structure and analysis of protein conformational stability via backbone thioester exchange. Gellman's group also studies new biologically active polymers (antibacterial agents, antimalarial agents, cell-adhesion agents) and new amphiphiles for membrane protein manipulation. The work from Gellman's laboratory has been recognized by the Ralph F. Hirschmann Award in Peptide Chemistry from the American Chemical Society in 2007, the Vincent du Vigneaud Award from the American Peptide Society in 2006, and the Arthur C. Cope Scholar Award from the American Chemical Society in 1997. Gellman served on the National Institutes of Health Medicinal Chemistry Study Section (1999–2002). He has been or is currently a member of the editorial advisory boards of several journals.

Kathryn Loving is a research leader at Schrödinger. She received her BA and BS in Biology and Computer Science from the University of Pennsylvania. She completed her PhD in Biological Engineering at MIT, working in the laboratory of Professor Bruce Tidor. There she worked on collaborative protein design projects and developed a technique for computationally-guided evolutionary protein engineering experiments. While in graduate school she also completed an internship at Pfizer, where she demonstrated that electrostatic charge optimization techniques can aid in lead-optimization of drugs for Neuraminidase. At Schrödinger she is involved with internal research projects, product management, and development of Python-based tools. She also works closely with customers on research projects, training, and customization. Kathryn's research interests include protein design and engineering, small molecule optimization, fragment-based design, pharmacophore modeling, cheminformatics, and hybrid methods.

Desmond Lun is an associate professor in the Department of Computer Science and a member of the Center for Computational and Integrative Biology at Rutgers, the State University of New Jersey. Prior to his present position, he was an associate professor in the School of Mathematics and Statistics and Director of the Phenomics and Bioinformatics Research Centre at the University of South Australia. From 2006 to 2008, he was a computational biologist at the Broad Institute of MIT and Harvard and a Research Fellow in Genetics at Harvard Medical School. He received bachelor's degrees in mathematics and computer engineering from the University of Melbourne, Australia, in 2001, and SM and PhD degrees in electrical engineering and computer science from the Massachusetts Institute of Technology (MIT) in 2002 and 2006, respectively.

His research interests are in synthetic biology, systems biology, biological signal processing, and network science. He is coauthor with Tracey Ho of Network Coding: An Introduction (Cambridge University Press, 2008). Lun is also a member of the Rutgers Energy Institute and an adjunct associate professor of mathematics and statistics at the University of South Australia.

The DNA of living organisms is an emerging substrate for engineering. Owing to rapid improvements in technology, the cost of reading and writing DNA will likely be nominal in the near future, enabling easy fabrication of DNA. In particular, it is likely that microbial genomes can be synthesized from scratch, allowing the production of engineered microbes with compelling applications such as biofuel and drug production. Unfortunately the mapping from DNA sequence to function is not well understood, and the question is, What DNA sequence do we make? We discuss how mathematical modeling can be used to address this question. In particular, we discuss approaches that we are developing for modeling metabolism and gene regulation and for using these models to guide design. In particular, we describe GDLS (Genetic Design through Local Search) and GDBB (Genetic Design through Branch and Bound), computational methods we have developed for genetic design for metabolic engineering. We describe our progress in engineering E. coli for the production of lipid biofuels and in other engineering directions.

Both ligand-based design (such as fingerprint similarity or pharmacophore screening) and structure-based design (such as molecular docking) have been used successfully to guide discovery of potential lead candidate compounds. Ligand-based virtual screening techniques are typically very fast, but the results are limited in diversity because most search methods focus on similarity to known active compounds. Conversely, structure-based design techniques are typically much slower but can model diverse molecules in a protein binding site. Our hybrid approach uses energetic analysis of structure-based fragment docking to elucidate and rank key protein binding site features for molecular recognition. The highest-ranked features form a map that is consistent with known tight-binding compounds, and these binding site maps can be used to quickly screen virtual databases for compounds that contain these desired chemical features.

Proteins, biology's premier functional molecules, display a wide array of activities. Nearly all of these molecular operations require the polypeptide chain to adopt a compact and specific folding pattern. In recent years chemists have been trying to learn how to induce analogous folding behavior in unnatural oligomers ("foldamers"), with the long-range goal of generating protein-like functions. This talk will focus on efforts from our laboratory involving beta-amino acid oligomers ("beta-peptides") and oligomers that contain both alpha- and beta-amino acid residues ("alpha/beta-peptides"). Each type of regular secondary structure observed in proteins, helix, sheet and reverse turn, can be generated among beta- and alpha/beta-peptides. Moreover, careful design at the residue level can lead to enhanced secondary structural stability among the foldamers relative to conventional peptides. We will show how the recognition properties encoded in alpha-helical segments can be mimicked with alpha/beta-peptide foldamers, leading to disruption of specific protein–protein interactions. These results may represent early steps toward development of an entirely foldameric "pseudo-biology."