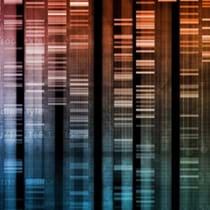 Dr Gingeras received his Ph.D. in Biology from New York University (1976). Subsequently, he received his postdoctoral training at Cold Spring Harbor Laboratory under Nobel Laureate, Dr. Richard Roberts as an American Cancer Society and National Institutes of Health Fellow and NIH postdoctoral fellow. After this postdoctoral training period Dr Gingeras became a Staff Scientist at Cold Spring Harbor Laboratory (1979-1983). He then accepted the position of Senior Scientist at the Salk Institute Biotechnolgy/Industrial Associates (SIBIA) (1983-1988) and became the Assistant Laboratory Director and Director of Molecular Diagnostics at SIBIA (1988-1990). In 1990 Dr. Gingeras became Director of Life Sciences Research Laboratory, Baxter Heathcare, Inc. (1990-1993) while keeping an appointment as Associate Adjunct Professor, Department of Pathology, School of Medicine, University of California, San Diego, (1991-1994). In 1993 Dr Gingeras to, Affymetrix Laboratories (1993-2008) serving as Vice President of Biological Sciences. Finally, in 2008 he returned to Cold Spring Harbor Laboratory as Professor and Head of Functional Genomics. He is the author and coauthor of 135 manuscripts and 20 patents.

Manolis Kellis is an Associate Professor of Computer Science at MIT, a member of the Computer Science and Artificial Intelligence Laboratory and of the Broad Institute of MIT and Harvard, where he directs the MIT Computational Biology Group (compbio.mit.edu). His research is in regulatory genomics, epigenomics, comparative genomics and phylogenomics, ENCODE, modENCODE, and Epigenomics Roadmap consortia. He has received the US Presidential Early Career Award in Science and Engineering (PECASE) for his NIH R01 work in Computational Genomics, the NSF CAREER award, the Alfred P. Sloan Fellowship, the AIT Niki Award for contributions to science and technology, the TR35 young innovator award, the Karl Van Tassel chair in EECS, the Distinguished Alumnus 1964 chair, and the Ruth and Joel Spira Teaching Award in EECS. He obtained his Ph.D. from MIT, where he received the Sprowls award for the best doctorate thesis in computer science, and the first Paris Kanellakis graduate fellowship. Prior to computational biology, he worked on artificial intelligence, sketch and image recognition, robotics, and computational geometry, at MIT and at the Xerox Palo Alto Research Center. He lived in Greece and France before moving to the US.

Gustavo Stolovitzky received his M.Sc. in Physics, from the University of Buenos Aires (1987) and his Ph.D. in Mechanical Engineering from Yale University (1994) receiving the Henry Prentiss Becton Prize, for Excellence in Engineering and Applied Sciences. In 1998 he joined the IBM Computational Biology center at IBM Research. His most recent interests are in the field of high-throughput biological-data analysis, reverse engineering biological circuits, the mathematical modeling of biological processes and new generation technologies for DNA sequencing. Gustavo leads the DREAM project on assessment of systems biology models, has co-authored more than 90 scientific publications, 15 patents and edited 2 books. His work has been highlighted in The New York Times, The Economist, Technology Review and Scientific American (where his DNA transistor project was chosen as one of the 10 world changing ideas of 2010) among other media. Gustavo is a Fellow of the NY Academy of Sciences, a Fellow of the American Physical Society, a fellow of the American Association for the Advancement of Science, an adjunct Associate Professor at Columbia University and the Manager of the IBM Functional Genomics and Systems Biology Group.

Learning to Read with Noise: Sequencing Technologies and the $1000 Genome

The quest for faster and cheaper ways to sequence nucleic acids has triggered much technological innovation. In this talk I will review the early history of DNA sequencing, and discuss some of the very creative solutions inspired by the challenge to reach the dream of sequencing a human genome for $1000 in a day.

The fast progress in sequencing makes the study of the measurement noise an essential component to understand the limitations of these technologies, and interpret their results. To exemplify this we characterized the variability in RNA-seq measurements. This noise model can be used as a powerful statistical test for differential expression in RNA-seq measurements.

Regulatory Genomics and Epigenomics in Fly Development and Human Disease

The large numbers of disease-associated loci that implicate non-coding regions require systematic tools for interpreting likely molecular mechanisms of disease necessary for drug development and therapeutics. The increasing availability of next-generation sequencing has enabled genome-wide maps of transcription factor binding and chromatin modification patterns in the fly and human genomes, provide the opportunity to infer predictive models of gene regulation in development and disease. In the context of Drosophila modENCODE, we have integrated TF binding, regulatory motif instances, chromatin modification patterns and gene expression dynamics to infer regulatory networks, which we show are predictive of gene function and gene expression levels. In the context of the ENCODE project, we have used chromatin maps of nine histone modifications in nine human cell types to systematically characterize cis-regulatory elements, their cell type-specificities, and their functional interactions to upstream regulators and downstream target genes. Combining cell-type-specific chromatin state maps, regulatory motif annotations and predicted activator and repressor networks, we provide new mechanistic insights for a number of phenotypes and diseases, illustrating the power of this methodology. Together, these projects illustrate the power of systematic large-scale experimental datasets and next-generation sequencing technologies for deriving computational models of gene regulation with important implications for the understanding of development and the elucidation of disease mechanisms.

The three billion base pairs of the human genome represent a storage devise encoding information for hundreds of thousands of processes that can go on within and outside of a human cell. This information is revealed in the RNAs that are transcribed and processed and in interaction of DNA with the protein and RNA products encoded within it. With the availability of a working draft of the human genome, efforts to catalogue and analyze the RNA products made by human cells (as part of ENCODE, modENCODE, Roadmap Epigenomics projects) has illuminated both the functional content and how this information is stored. A total of ~142,000 transcripts present within ~50,000 genic regions represent our current best annotation of this complexity. However, results from the use of deep sequencing methodologies indicate that these figures will continue to grow substantially as the exploration of transcripts expressed present at low copy numbers matures. Such low copy number RNAs are being found as part of the transcriptional outputs of specialized cells comprising numerically small portions of histologically complex organs or specifically enriched in sub-cellular compartments. Revealed in these efforts to derive a comprehensive catalogue of the human genome’s transcriptional output are important and often under appreciated lessons. These lessons include that: a) low levels of expression does not equate to non-functionality b) the fate of most transcripts is to be processed into stable, sometimes capped short (<200nt) RNAs, c), a large fraction of RNA products are selectively enriched in sub-cellular compartments in a cell, and d) RNAs can function outside of the cell of origin. Appreciation of these and other lessons yet to be learned could assist in organizing what is often seen as dauntingly complex genome.