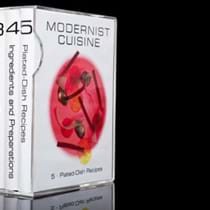 The Art & Science of Modernist Cuisine

Former Microsoft CTO, inventor, entrepreneur, and award-winning chef Nathan Myhrvold teamed up with world-class culinary artists and scientists Chris Young and Maxime Bilet in his Seattle experimental kitchen-laboratory to produce a revolutionary new cookbook that is an overview of the technologies and techniques of modern gastronomy.

In Modernist Cuisine: The Art and Science of Cooking, Myhrvold, Young, and Bilet—scientists, inventors, and accomplished cooks—have created a six-volume 2,438-page set that reveals science-inspired techniques for preparing food that ranges from the otherworldly to the sublime. The authors—and their 20-person team at The Cooking Lab—have achieved astounding new flavors and textures by using tools such as water baths, homogenizers, centrifuges, and ingredients such as hydrocolloids, emulsifiers, and enzymes. It is a work destined to reinvent cooking.

Join Science & the City and moderator Padma Lakshmi, host of Bravo's Top Chef, for an evening of experimental cookery with the authors of the 43-pound tome that Tim Zagat calls "The most important book in the culinary arts since Escoffier."

A Modernist Cuisine recipe will be sampled during the Q&A, and a reception will follow with the opportunity to place orders for shipment of Modernist Cuisine. Those who order will receive a book plate pre-signed by the authors.

Dr. Myhrvold is chief exec­u­tive offi­cer and a founder of Intellectual Ventures, a firm ded­i­cated to cre­at­ing and invest­ing in inven­tions. In addi­tion to stim­u­lat­ing the inven­tion of oth­ers, Myhrvold is him­self an active inven­tor, with nearly 250 patents issued or pending-including sev­eral related to food tech­nol­ogy. Before found­ing his inven­tion com­pany, Myhrvold was the first chief tech­nol­ogy offi­cer at Microsoft. He estab­lished Microsoft Research, and dur­ing his tenure he over­saw many advanced tech­nol­ogy projects. He left Microsoft in 1999 to pur­sue sev­eral inter­ests, includ­ing a life­long inter­est in cook­ing and food science.

Myhrvold com­peted on a team that won first place in sev­eral cat­e­gories at the 1991 World Championship of Barbecue, includ­ing first prize in the spe­cial pasta cat­e­gory for a recipe that Myhrvold devel­oped on the day of the contest.

After work­ing for two years as a stagier at Seattle's top French restau­rant, Rover's, Myhrvold com­pleted culi­nary train­ing with renowned chef Anne Willan at the Ecole De La Varenne. In addi­tion, he has worked as Chief Gastronomic Officer for Zagat Survey, pub­lisher of the pop­u­lar Zagat restau­rant guide­books. Through his many vis­its to the world's top restau­rants, Myhrvold has become per­son­ally acquainted with many of the lead­ing Mod­ernist chefs and the science-inspired cook­ing tech­niques they have pioneered.

Myhrvold is him­self an accom­plished prac­ti­tioner of Mod­ernist cui­sine. He has con­tributed orig­i­nal research on cook­ing sous vide to online culi­nary forums, and his sous vide tech­niques have been cov­ered in the New York Times Magazine, Wired, and PBS's "Gourmet's Diary of a Foodie" tele­vi­sion series.

Maxime Bilet received a BA in creative writing, literature, and visual arts from Skidmore College. Bilet then grad­u­ated with high­est hon­ors from the Institute of Culinary Education in New York. He com­pleted a stage at Jack's Luxury Oyster Bar and was quickly hired to the head chef posi­tion there by Jack Lamb. Moving to London, he accepted a stage with Heston Blumenthal's devel­op­ment team at The Fat Duck. Just prior to join­ing the culi­nary team as head chef for recipe research and development at The Cooking Lab, Bilet trained as sous chef to open the London branch of Auberge de L'Ile.

Chris Young opened the exper­i­men­tal kitchen at The Fat Duck and worked under world-famous chef Heston Blumenthal to over­see devel­op­ment of his most inno­v­a­tive dishes. Young com­pleted degrees in math­e­mat­ics and bio­chem­istry at the University of Washington. He left behind his doctoral work for a job as com­mis chef at one of Seattle's top-rated restau­rants, and quickly earned a rep­u­ta­tion for his abil­ity to apply sci­ence and tech­nol­ogy in the kitchen.

At The Fat Duck, Young expanded the exper­i­men­tal kitchen from one to more than six full-time chefs. He also coor­di­nated the work of sev­eral con­sul­tant sci­en­tists. Beyond devel­op­ing new dishes for The Fat Duck's menu, Young was respon­si­ble for man­ag­ing the recipe devel­op­ment for the crit­i­cally acclaimed first and sec­ond sea­sons of BBC's Perfection: With Heston Blumenthal. Young has also writ­ten exten­sively on the sci­ence of food and cook­ing for The Fat Duck Cookbook and has pub­lished schol­arly research in the Journal of Agricultural Chemistry and Food Science.

Young has been an invited speaker at the Culinary Institute of America, University of Washington, University of Reading, the British Society of Food Flavourists, and var­i­ous food companies.

Padma Lakshmi is an actor, model, food writer, and jewelry designer, who currently hosts Bravo's Top Chef All-Stars. She has hosted two other successful cooking shows—Padma's Passport where she cooked diverse cuisine from around the world, and Planet Food, a documentary series broadcast on The Food Network and worldwide on the Discovery Channel, in which she journeyed to countries including Spain and India—and she has written a best-selling cookbook Easy Exotic, for which she won the International Versailles Event for best cookbook by a first time writer. Her second cookbook, Tangy, Tart, Hot & Sweet, is filled with over 150 recipes from around the world.

As an actor she was last seen in Paul Mayeda Berges' film Mistress of Spices, and she appeared as Princess Bithia in ABC's mini-series The Ten Commandments, the second-highest rated television film of 2006. She has appeared in films in the US, Italy, and India.

In addition to her food writing, she has contributed to American Vogue, Gourmet, and British and American Harper's Bazaar.