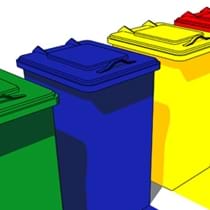 The "Trash Talk" series explores options for managing municipal solid waste that may offer large cities sustainable alternatives to landfill disposal and conventional incineration. The first event in our series will examine several new waste-to-energy technologies, among them, gasification and biological treatment. Join us to hear experts explain how these technologies work, discuss their advantages, and probe issues related to them.

Other topics in the series will include::

David Demme has more 30 years of experience in the areas of planning, design, feasibility analysis, alternative delivery procurements, public-private partnering, and project management.  He has been involved in the solid waste conversion technology and waste-to-energy (WTE) business for over 25 years.  Early in his career, he gained hands-on experience designing WTE facilities for a builder/operator.  He has since held a number of management positions in the WTE industry.  Mr. Demme's track record includes management of more than 20 solid waste feasibility-related projects.  He has written the procurement documents, reviewed contractor proposals, evaluated project feasibility, and negotiated contracts for numerous WTE projects.  Mr. Demme's work not only involves reviewing the technical aspects of projects, it involves financial analysis and economic modeling as well.  In 2010, he managed a feasibility study for an anaerobic digestion project to manage food waste on Hunts Point in New York City.  Mr. Demme holds a B.S. in Mechanical Engineering from Cornell University and an M.B.A. from the University of Connecticut.

Mr. Paisley is internationally recognized as an expert in gasification technologies, specializing in biomass gasification.  He is the inventor of the Taylor Gasification process and inventor or co-inventor of several other gasification technologies including the SilvaGas® process.  Mr. Paisley was in charge of the initial development of a major biomass gasification process at Battelle Memorial Institute.  Mr. Paisley served as the Vice President for Technology at FERCO Enterprises prior to his employment at Taylor Biomass Energy.  Prior to FERCO, he completed a 20-year career at Battelle, and worked at Bituminous Coal Research and the Babcock & Wilcox Research Center.

Mr. Paisley has over 40 years of experience with gasification technologies and energy and chemical value recovery from fuel and residue materials.  He has extensively published articles relating to biomass gasification and fuel conversion technologies.  As an expert in the renewable energy field, Mr. Paisley authored the Biomass Energy section for the online Kirk-Othmer Encyclopedia of Chemical Technology.

He holds several U.S. and foreign patents on energy and material recovery processes.  In 1998, Mr. Paisley was awarded the R&D 100 Award for the SilvaGas® gasification process.

Mr. Paisley is a member of the American Chemical Society; The American Institute of Chemical Engineers; and the Biomass Energy Research Association.   He also serves as a member of the Board of Directors for the Biomass Energy Research Association.  Mr. Paisley is a Registered Professional Engineer who has been recognized in Who's Who in Frontiers of Science and Technology, Who's Who in the Midwest, and the International Who's Who for Professionals.  Mr. Paisley received his B.S. in Chemical Engineering from the University of Cincinnati.  Graduate work in chemical engineering was completed at the University of Akron in Ohio.

Inventor of the Noranda Smelting and Converting Process that has reduced sulphur emissions to the atmosphere by millions of tons. Founder of the Earth Engineering Center in 1996; in 1997 led the transformation of the historic School of Mines to the new engineering discipline of Earth and Environmental Engineering that now includes the Lenfest Center for Sustainable Energy and the Water Resources Center; elected member of the U.S. National Academy of Engineering and NYAS; recipient of several professional awards, author of over 200 technical papers and books and inventor of over twenty patents.

Nada Anid, PhD, is the first female dean of NYIT's School of Engineering and Computing Sciences. In this role, she oversees 77 engineering and computing sciences faculty members and approximately 1,700 graduate and undergraduate students at campuses located in Manhattan and Old Westbury, N.Y., the Middle East, and China.

Dr. Anid is among the first engineers to study the role of vitamin B12 and other organometallic coenzymes in the dechlorination of important toxic compounds such as carbon tetrachloride and polychlorinated biphenyls. Her current research is in the fields of renewable energy, sustainability, emerging technologies, and engineering education. Dr. Anid embraces NYIT's forward-thinking and applications-oriented mission and serves on the boards of several professional organizations. In addition, she is working on several strategic partnerships between NYIT's School of Engineering and the public and private sector and was recently named one of the top 50 women in business on Long Island by Long island Business News. Dr. Anid also received the 2010 LISTnet Diamond Awards in recognition of her significant contributions toward the advancement of women in technology on Long Island as well as for her professional achievements in the technology field.

She holds leadership positions in the American Institute of Chemical Engineers, the American Society for Engineering Education, and the US Engineering Deans Council, among others. Dr. Anid earned her Ph.D. in environmental engineering from the University of Michigan (Ann Arbor), and bachelor and Master of Science degrees in chemical engineering from the Royal Institute of Technology (KTH-Stockholm). Prior to joining NYIT, she was chair and graduate program director of the Chemical Engineering Department at Manhattan College.

For sponsorship opportunities please contact Brett VanLandingham at bvanlandingham@nyas.org or 212.298.8631.

Anaerobic digestion (AD) is a proven, naturally occurring process that has the potential of both generating renewable energy and diverting organic waste from waste disposal facilities.  While AD facilities have been used for many years in Europe to manage the organic portion of the residential and commercial waste stream, it has only recently been given serious consideration in North America.   The presentation will focus on the efforts by New York City to support and develop an anaerobic digestion facility at Hunts Point, the world's largest food distribution center.  The presentation will begin with a basic overview of anaerobic digestion systems and the current status of anaerobic digestion facility development in North America.  Various options for biogas use will be described and explored, and an overview of project costs and revenues will be presented.

Recent price increases for various forms of energy along with projected shortages of supply have resulted in renewed interest in alternative fuels. Biomass gasification provides a renewable basis for supplying electric power and also a broad suite of chemicals such as Fisher-Tropsch liquids as well as hydrogen. The Taylor gasification process, being developed by Taylor Biomass Energy is a biomass gasification process that produces a MCV gas. The Taylor gasification process provides improvements over currently available gasification processes by integrating improvements to reduce issues with ash agglomeration and provide in-situ destruction of condensable hydrocarbons (tars), an essential element in gas cleanup. The gas conditioning step integrated into the Taylor Gasification Process provides a unique method to convert the tars into additional synthesis gas and to adjust the composition of the synthesis gas. Taylor Biomass Energy has developed and refined a sorting and recycling process that can produce a clean feedstock for energy recovery from abundant residue materials such as construction and demolition residuals and MSW. The sorting and separating process can then be coupled to the Taylor gasification process to produce clean, sustainable energy.