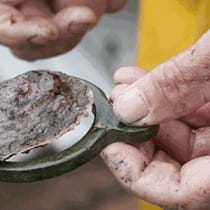 Can Oysters Save New York Harbor?

Presented by Science & the City, The Sackler Institute for Nutrition Science, The Harbor School, and Pace University.

Join us at the New York Academy of Sciences for a panel discussion, led by award-winning journalist Andrew Revkin, with some of the key players in the movement to restore New York oysters. There will also be a special presentation by aquaculture students from the New York Harbor School on their oyster restoration work. You'll learn about efforts to revive the Harbor and train the next generation of environmental leaders, and have the opportunity to find out what local oysters taste like!

The oyster—once more abundant here than anywhere else in the world—was a daily reminder to New Yorkers that they lived on a bustling, productive estuary. But oysters were subsequently wiped out by pollution, dredging, disease, and over-consumption in the early 20th century.

More recently, however, thanks to a movement of environmentalists, educators, historians, and locavores, New Yorkers are beginning to reconnect to their water-bound past, and the symbol of this reconnection is the eastern oyster.

In 2003, the New York Harbor School opened as the city's first public high school with a curriculum focused exclusively on the local marine environment. With dozens of partners, the Harbor School has made the restoration of the local oyster population to self-sustaining levels the centerpiece of its unique marine science and technology curriculum.

This event is part of our Locavore's Dilemma Series.

More and more, people are starting to ask serious questions about where their food is coming from and what exactly it contains. Some New Yorkers have even become devoted locavores—making sure all their food comes from within 500 miles of home. But that's no easy feat, and how do the rest of us figure what the best food choices are? In this 3-part series, Science & the City will examine some tough questions surrounding local food. Plus, you'll get to sample local treats at each event!

Join us for this special series:

• The Science Behind the Hype: Resveratrol in Wine & Chocolate, June 5

A prize-winning journalist, online communicator and author, Andrew Revkin has spent a quarter of a century covering subjects ranging from the assault on the Amazon to the Asian tsunami, from the troubled relationship of science and politics to climate change at the North Pole. From 1995 through 2009, he covered the environment for The New York Times.

In 2010, he became the senior fellow for environmental understanding at Pace University's Pace Academy for Applied Environmental Studies. He continues to write his Dot Earth blog for The New York Times. He lives in the Hudson River Valley with his wife and one of his two sons.

Paul Greenberg is the author of the James Beard Award winning New York Times bestseller Four Fish: The Future of the Last Wild Food and a regular contributor to The New York Times Magazine, Book Review, and Opinion Page. He has also written for National Geographic Magazine, GQ, The Times (of London), Vogue, and many other publications. In the last five years he has been both a National Endowment for the Arts Literature Fellow and a W. K. Kellogg Foundation Food and Society Policy Fellow.

Kate Orff is a registered landscape architect and an Assistant Professor at Columbia University's Graduate School of Architecture. She is principal and founder of the Manhattan based design studio SCAPE. Orff received a BA in Political and Social Thought with distinction from the University of Virginia, and earned a master's degree in landscape architecture from the Graduate School of Design at Harvard University. Her work focuses on the integration of design and the earth sciences, the development of ecological infrastructure, design for biodiversity, and in generating new modes of civic collaboration for re-shaping public realm.

Peter Malinowski is the founder of the aquaculture and oyster restoration programs at the Urban Assembly New York Harbor School. He is the Aquaculture Program Director and a New York State-certified Career and Technical Education (CTE) teacher, licensed to teach the animal production, science and business aspects of aquaculture. He has recently developed a three-year restoration based Aquaculture curriculum. Since 2009, Malinowski has been the school's Oyster Restoration Coordinator, leading Harbor School's participation in the Oyster Restoration Research Project, a city wide collaborative initiative involving 28 government, non-profit and university partners who have been working to understand how best to restore oysters to New York Harbor. For this project, Malinowski designed and built New York Harbor's first Floating Upwelling System (FLUPSY), which he integrated into the Harbor School curriculum as an experiential learning opportunity for the Aquaculture students. This spring, Malinowski expects to engage his students in building another first—New York Harbor's first contemporary floating, off-bottom oyster nursery. Malinowski graduated from Vassar College in 2006 with a BA in Biology.