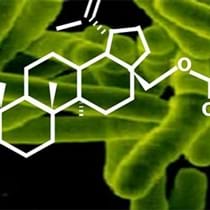 The Chemical Biology Discussion Group brings together chemists and biologists interested in learning about the latest ideas in this rapidly growing field. It provides a forum for lively discussion and for establishing collaborations between chemists armed with novel technologies and biologists receptive to using these techniques for answering complex research questions. This symposium will cover topics important in infectious disease, discussed on a molecular level. We will examine mechanisms by which bacteria coordinate group behavior, including biofilm formation and virulence, using small molecule signal transduction pathways; strategies for detecting pathogens, including as weapons of biological warfare; and structure- and function-based approaches to the development of practical new medical treatments.

Dr. Lorrence H. Green earned a PhD in Cell and Molecular Biology from Indiana University. He subsequently completed a three-year postdoctoral fellowship at Harvard University which focused on recombinant DNA and genetics research. Dr Green then joined Analytab Products, a subsidiary of Wyeth Pharmaceuticals and a major manufacturer of in vitro diagnostic test kits. During the next twelve years he invented, developed and manufactured over 40 diagnostic test kits, eventually becoming the Director of New Product Development and Product Support. Dr Green is currently the President of Westbury Diagnostics, Inc. a contract research and development company, which he founded in 1993. He has worked on projects ranging from susceptibility testing of microorganisms, to manufacturing monoclonal antibodies. Dr. Green routinely lectures at four different colleges, and in addition to published peer reviewed articles, he co-edited the 2009 CRC Practical Handbook of Microbiology, Second Edition. He is a Director of the Fundamentals of the Bioscience Industry Program at Stony Brook University, and is a frequent speaker on the topic of Scientist / Entrepreneurs.

Elizabeth Boon grew up in Durham, NC. She received her AB with Highest Honors in Chemistry from Kenyon College in 1997 and her PhD from the California Institute of Technology in 2003. Liz completed a NIH Postdoctoral Fellowship at the University of California, Berkeley before starting at Stony Brook University in the fall of 2006. She has received several awards for her research including the Presidential Early Career Award for Scientists and Engineers, the American Chemical Society PROGRESS / Dreyfus Lectureship Award, The NYSTAR Watson Young Investigator Award, the Office of Naval Research Young Investigator Award, and the Rising Star Award from the Research Foundation of the State University of New York. In 2011 the Kavli Foundation and the National Academy of Sciences elected Liz a Kavli Fellow. Current research in her lab focuses on determining and characterizing the biochemical pathways responsible for regulating bacterial group behaviors.

Professor Kim D. Janda currently holds the rank of the Ely R. Callaway, Jr. Chaired Professor in the Departments of Chemistry, Immunology and Microbial Science at The Scripps Research Institute and is the Director of the Worm Institute of Research and Medicine (WIRM) at The Scripps Research Institute. Furthermore, Dr. Janda is a Skaggs Scholar within the Skaggs Institute of Chemical Biology also at The Scripps Research Institute. He holds a BS degree from the University of South Florida in Clinical Chemistry and a doctoral degree from the University of Arizona with Robert B. Bates in natural product total synthesis. A hallmark of his research is that he has been able to uniquely combine principles of medicinal chemistry together with modern molecular biology, immunology and neuropharmacology, allowing the creation of both synthetic/natural molecules and processes with biological, chemical and physical properties. He has published over 450 original publications in refereed journals and founded the biotechnological companies CombiChem, Drug Abuse Sciences and AIPartia. He is a member of the NIH study section Vaccines against Microbial Diseases. He holds the titles of associate editor of Bioorganic & Medicinal Chemistry, PloS ONE and serves, or has served on numerous journals including J. Comb. Chem., Chem. Reviews, J. Med. Chem., The Botulinum Journal, Bioorg. & Med. Chem. Lett., and Bioorg. & Med. Chem.

Kyu Rhee is an Associate Professor of Medicine and Microbiology & Immunology and Hearst Clinical Scholar in Microbiology & Infectious Diseases at Weill Cornell Medical College. Dr. Rhee earned his MD/PhD from the University of California, Irvine, followed by clinical training in internal medicine and infectious diseases and postdoctoral training in the laboratory of Carl Nathan, at Weill Cornell Medical College. The focus of Dr. Rhee’s lab is the development and application of metabolomic technologies to study the physiology and pharmacology of Mycobacterium tuberculosis, the causative agent of TB.

Nature, and in particular biology, contains information to instruct scientists about what is possible. This can serve as an inspiration to probe the frontiers of biology-chemistry. At the same time, chemistry can contribute to our understanding of biology and also to our ability to manipulate complex systems for human health and welfare. The combination of the tools and principles of chemistry, together with the tools of modern molecular biology, allows us to create complex synthetic and natural molecules, and processes with novel biological, chemical and physical properties. This lecture will illustrate the tremendous opportunities that lie at this interface of biology, chemistry and medicine by describing a number of examples that we are actively working on in our laboratory. Including cell-to-cell communication within Gram-negative and -positive bacteria or what has been termed quorum sensing and the discovery of small molecules that can provide transient relief from the bioterrorist threat and most deadly toxin known, Botulinum neurotoxin.

The ability of biological systems to sense and respond to external stimuli is of fundamental importance. Dissolved gases such as nitric oxide (NO), carbon monoxide and molecular oxygen are increasingly recognized as important biological signals. NO is a well known signaling molecule in eukaryotic organisms, regulating processes such as vasodilation and neurotransmission. Recent evidence indicates that NO also serves a signaling role in bacteria; NO signaling has beenimplicated in processes such as quorum sensing and biofilm formation.Biofilms are surface-bound, matrix-encapsulated, multicellular communities that are extremely resistant to antibiotic treatments. In addition to being important in many naval, industrial, and environmental processes, biofilms are responsible for ~60% of all human infections. Despite the well-documented role of NO in this process, the mechanism for NO regulation of biofilm formation has not been established. We hypothesize that the NO/H-NOX signaling pathway may contribute to biofilm regulation. H-NOX domains are evolutionarily conserved gas-sensing heme domainsthat include the well-characterized eukaryotic NO sensor, soluble guanylate cyclase. In the genomes of bacteria, H-NOX genes are typically co-cistronic with eithera diguanylate cyclase (DGC) or histidine kinase (HK) gene. Both DGCs and HKs are linked to biofilm regulation.Evidence from biochemical and biophysical characterization of proteins in the H-NOX signaling pathway as well as proteomic, genetic, and growth studies will be presented to support our hypothesis.

Despite major advances in the fields of genomics and medicinal chemistry, anti-infectives research has failed to keep pace with the emergence and spread of antibiotic resistant pathogens. Nowhere is this problem more apparent than in the case of Mycobacterium tuberculosis (Mtb), the causative agent of tuberculosis (TB) and leading bacterial cause of deaths worldwide. Though potentially curative, current TB chemotherapies are longer and more complex than those for virtually any other bacterial infection. As a result, these same therapies have given rise to significant rates of treatment discontinuation, failure and the paradoxical emergence and spread of multidrug (MDR) and extensively drug resistant (XDR) TB itself. Here, we highlight critical gaps in our biochemical understanding of Mtb physiology and drug resistance that fundamentally limit current drug development efforts.