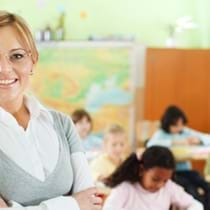 With a third of new teachers leaving after three years and almost half after five, the problem of teacher retention calls to mind the image of bailing out the lifeboat with a sieve. Join the New York Academy of Science and Demos for a panel discussion on issues and solutions surrounding teacher retention in the American classroom.

The recruitment of highly qualified teachers into the STEM teaching workforce has received a tremendous amount of attention in the past few years. And groups—from Teach for America to the New York City teaching fellows—have demonstrated that our nation's very best students will become teachers.

But once teachers are in the classroom, they often face poor workplace conditions, lack of peer and leadership support, and pay that does not reflect their qualifications or amount of work. Without solving the retention crisis, does America have a chance to make a dent in the education crisis?

This event is also available as a webinar. Webinar is free of charge, but registration is required.

Dr. Julia Rankin Morandi has extensive experience in K-20 education with students of all ability levels. She is the former K-12 Director of Science for the New York City Department of Education and the Director of Science/Life Skills, K-12, for Bridgeport Public Schools in Connecticut. Committed to urban education, she helped develop NSTA's Urban Science Education Leaders (USEL). As CEO and President of The Science Collaborative, Inc, she works to build and enhance professional learning communities. For the last three years, she coordinated the California Science Project Teacher Retention Initiative (CSP TRI) and the Science and Math Initiative for the Los Angeles Education Partnership (LAEP). Presently, she is the Project Manger for the Friends of the Los Angeles River (FoLAR) developing the FoLAR River Rover, a mobile education interpretive center.

Michael Holmes received both his BS(1997) and MS(2000) in Chemistry from NC Central University. Prior to teaching, he worked in research institutions in developmental biology at Albert Einstein College of Medicine and Population Council(NY). Mr. Holmes was invited to participate on the NYC Teaching Fellows Advisory board for the 2012 academic year, was selected as a Jhumki Basu Foundation Fellow at NYU in 2011, and was awarded the prestigious Alfred P. Sloan Award for Excellence in Teaching Science. Mr. Holmes also received a Funds for Teacher Grant to examine Nuclear Testing Sites in the southwest United States. Throughout Mr. Holmes' teaching career he has been involved with various projects with the American Museum of Natural History, New Visions, and PBS.

David M. Steiner was born in Princeton, New Jersey and was raised in Cambridge, England. He earned degrees from Balliol College, Oxford University (BA and MA) and Harvard University (PhD). From 1999 to 2004 he was a professor of education in Boston University's School of Education in its department of administration. From 2005 to 2009 he served as dean of Hunter College-CUNY's School of Education. At Hunter, Dr. Steiner led a national partnership with the KIPP Academies, Uncommon Schools, Achievement First and Teach for America to create a dedicated teacher preparation program for charter and non-charter school teachers geared to the unique challenges of urban schools. Known as Teacher U at Hunter, the partnership has gained national attention for rethinking what rigorous teacher preparation looks like. Dr Steiner was appointed by the Board of Regents as President of the University of the State of New York and Commissioner of Education in October 2009 and served in that capacity until 2011 when he returned as dean of Hunter College School of Education.

Dr. Preeti Gupta is director of youth Learning and Research at the American Museum of Natural History and one of the faculty of the newly state funded Masters of Arts in Teaching (MAT) program. Previous to this position, Dr. Gupta was Senior Vice President for Education and Public Programs at the New York Hall of Science and was responsible for strategic planning and program development for the internationally replicated Science Career Ladder Program, as well as teacher professional development, out of school time programming, digital learning, family learning and the museum's science technology library. She has a Bachelor’s Degree in Bioengineering from Columbia University, a Master’s Degree in Education from The George Washington University and a doctoral degree in Urban Education from the City University of New York Graduate Center.