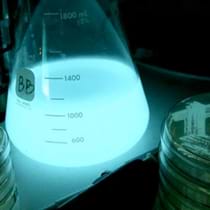 Researchers working on obscure organisms can find themselves in a range of varied careers, including finding novel drugs to combat bacterial infections and cancer. In this symposium, Bonnie Bassler will discuss her work with bacteria and their remarkable ability to use chemical communication to take a census of their numbers, to recognize when they are alone or in groups, and to carry out collective behavior (a field known as ‘quorum sensing’). Quorum sensing-controlled processes include bioluminescence, virulence factor production, sporulation, and biofilm formation. We now know that quorum sensing plays a major role in pathogenicity and in light of this, her lab's recent work involves disrupting bacterial cell-cell communication in order to develop novel anti-microbial agents. Arturo Casadevall will then explore how drugs are often discovered from unexpected angles, including a potential therapy for human melanoma that stems from the study of fungal melanin, and how an anticancer therapy inspired the development of a new antimicrobial therapy based upon radioimmunotherapy.

Please note: Transmission of presentations via the webinar is subject to individual consent by the speakers. Therefore, we cannot guarantee that every speaker’s presentation will be broadcast in full via the webinar. To access all speakers’ presentations in full, we invite you to attend the live event in New York City where possible.

S. Marvin Friedman is Professor Emeritus in the Department of Biological Sciences at Hunter College of CUNY in New York City. His research has focused on the molecular biology of bacterial growth at elevated temperatures. He has published many articles on this subject as well as editing the proceedings of an East-West meeting in Honolulu entitled “Biochemistry of Thermophily”. He currently writes blogs for the ASM blog site, Small Things Considered.

Bonnie Bassler is a member of the National Academy of Sciences and the American Academy of Arts and Sciences. She is a Howard Hughes Medical Institute Investigator and the Squibb Professor of Molecular Biology at Princeton University. Bassler received a B.S. in Biochemistry from the University of California at Davis, and a Ph.D. in Biochemistry from the Johns Hopkins University. She performed postdoctoral work in Genetics at the Agouron Institute, and she joined the Princeton faculty in 1994. The research in her laboratory focuses on the molecular mechanisms that bacteria use for intercellular communication. This process is called quorum sensing. Bassler’s research is paving the way to the development of novel therapies for combating bacteria by disrupting quorum-sensing-mediated communication. At Princeton, Dr. Bassler teaches both undergraduate and graduate courses. Dr. Bassler directed the Molecular Biology Graduate Program from 2002-2008 and she currently chairs Princeton University’s Council on Science and Technology which has revamped the science curriculum for humanists. Bassler is a passionate advocate for diversity in the sciences and she is actively involved in and committed to educating lay people in science. Dr. Bassler was awarded a MacArthur Foundation Fellowship in 2002. She was elected to the American Academy of Microbiology in 2002 and made a fellow of the American Association for the Advancement of Science in 2004. She was given the 2003 Theobald Smith Society Waksman Award and she is the 2006 recipient of the American Society for Microbiology’s Eli Lilly Investigator Award for fundamental contributions to microbiological research. In 2008, Bassler was given Princeton University’s President’s Award for Distinguished Teaching. She is the 2009 recipient of the Wiley Prize in Biomedical Science for her paradigm-changing scientific research. She is the 2011 recipient of the National Academies’ Richard Lounsbery Award. She is the 2012 UNESCO-L’Oreal Woman in Science for North America. Bassler was the President of the American Society for Microbiology in 2010-2011. She is currently the Chair of the American Academy of Microbiology Board of Governors. President Barak Obama nominated Bassler for membership on the National Science Board. The Board oversees the NSF and prioritizes the nation’s research and educational priorities in science, math and engineering. She was an editor for a decade for Molecular Microbiology, and is currently an editor of mBio, and Chief Editor of Annual Reviews of Genetics. She is an associate editor for Cell, Proceedings of the National Academy of Sciences, Journal of Bacteriology, and other journals. Among other duties, she serves on the National Academies Board on Life Sciences, the Howard Hughes Medical Institute Science Education Committee, and Discovery Communications’ Science Channel Scientific Advisory Board. She serves on oversight, grant, fellowship, and award panels for the National Academies of Sciences, National Institutes of Health, National Science Foundation, American Society for Microbiology, American Academy of Microbiology, Keck Foundation, Burroughs Wellcome Trust, Jane Coffin Childs Fund, PEW Charitable Trust, and the MIT Whitehead Institute.

Arturo Casadevall, MD, PhD is the Leo and Julia Forchheimer Professor of Microbiology & Immunology at the Albert Einstein College of Medicine of Yeshiva University in the Bronx, New York. He is Chairman of the Department of Microbiology and Immunology and served as Director of the Division of Infectious Diseases at the Montefiore Medical Center at the Albert Einstein College of Medicine from 2000–2006. Dr Casadevall received both his MD and PhD (biochemistry) degrees from New York University in New York, New York. Subsequently, he completed internship and residency in internal medicine at Bellevue Hospital in New York, New York. Later he completed subspecialty training in Infectious Diseases at the Montefiore Medical Center and Albert Einstein College of Medicine. Dr. Casadevall major research interests are in fungal pathogenesis and the mechanism of antibody action. In the area of Biodefense Dr. Casadevall has an active research program to understand the mechanisms of antibody-mediated neutralization of Bacillus anthracis toxins. He has authored over 500 scientific papers. Dr. Casadevall was elected to membership in the American Society for Clinical Investigation, the American Academy of Physicians, and the American Academy of Microbiology. He was elected a fellow of the American Academy for the Advancement of Science and has received numerous honors including the Solomon A Berson Medical Alumni Achievement Award in Basic Science from the NYU School of Medicine, the Maxwell L. Littman Award (mycology award), the Rhoda Benham Award from Medical Mycology Society of America, and the Kass Lecture of the Infectious Disease Society of America. Dr. Casadevall is the Editor in Chief of mBio, the first open access general journal of the American Society of Microbiology. He serves in the editorial board of the Journal of Clinical Investigation, The Journal of Experimental Medicine, and The Journal of Infectious Diseases. Previously he served as Editor of Infection and Immunity. He has served in numerous NIH committees including those that drafted the NIAID Strategic Plan and the Blue Ribbon Panel on Biodefense Research. Dr. Casadevall served on the NAS committee that reviewed the science behind the FBI investigation of the anthrax attacks in 2001. He is currently a member of the National Science Advisory Board for Biosecurity and co-chaired the NIAID Board of Scientific counselors.

The American Society For Microbiology

Bacteria communicate with one another via the production and detection of secreted signal molecules called autoinducers. This cell-to-cell communication process, called "Quorum Sensing," allows bacteria to synchronize behavior on a population-wide scale. Behaviors controlled by quorum sensing are usually ones that are unproductive when undertaken by an individual bacterium acting alone but become effective when undertaken in unison by the group. For example, quorum sensing controls virulence, biofilm formation, sporulation, and the exchange of DNA. Thus, quorum sensing is a mechanism that allows bacteria to function as multi-cellular organisms. Gram-negative bacteria use acyl-homoserine lactone (AHL) autoinducers, which are detected by one of two receptor types, cytoplasmic LuxR-type receptors or membrane-bound LuxN-type receptors. We found small molecule antagonists of LuxN-type receptors that are also potent antagonists of LuxR-type receptors, despite differences in receptor structure, localization, AHL specificity, and signaling mechanism. Structural studies combined with mutagenesis allowed us to pinpoint the amino acid residues in the receptors that are critical for conferring agonist and antagonist activity to different ligands. Our most potent quorum-sensing antagonist protects animals from quorum-sensing-mediated killing by pathogenic bacteria validating the notion that targeting quorum sensing has potential for antimicrobial drug development.

The history of drug discovery is packed with tales of serendipity and the finding of useful compounds in the most unexpected places. Perhaps most importantly, drug discovery often occurs in fields that are distant from the clinical problem addressed. Hence, penicillin was found when molds growing in agar plates inhibited bacterial colony formation, the usefulness of cisplastin as an antineoplastic agent was first inferred during bacterial growth studies when the use of platinum electrodes led to cell division arrest, and Viagra was initially developed as a drug for the treatment of cardiac ischemia. Consistent with this theme this talk will describe how the study of melanin as a virulence factor in pathogenic fungi led to the discovery of strategy against fungi and cancer. Melanin confers resistance against the immune system and interference with melanogenesis leaves fungal cell vulnerable to clearance by immunological mechanisms, suggesting a new general approach to antifungal drug discovery. In the course of studying fungal melanogenesis we developed the first monoclonal antibody to this enigmatic pigment and showed that this antibody, when conjugated to radionuclides could be used to treat experimental human melanoma in mice. The antibody has subsequently been tested in patients with metastatic melanoma with promising results. Hence, very basic studies on melanin provided leads for both new antimicrobial and anti-tumor drug discovery. The talk will explore the premise that novel therapies often arise unexpectedly from non-directed basic science projects and that societies that fund basic science robustly can expect to a rich harvest of new pharmaceutical agents.