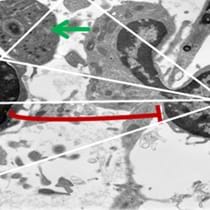 Presented by the Systems Biology Discussion Group at the New York Academy of Sciences.

The mission of the immune system is essentially "don't let in any intruders!" In the face of the number of self-molecular epitopes a human produces, and of the even larger number of non-self-antigens it encounters, this mission is easier stated than accomplished.

In terms of fitness, an immune system that triggers a full-blown response upon exposure to any non-self-antigen would be an evolutionary dead-end given its unsustainable energy cost. Humans have inherited a sophisticated system that operates well most of the time: intruders are kept at bay while innocuous visitors from the surrounding ecosystem (such as reproductive vectors from flowering plants) are appropriately disposed of without triggering a response. However, in some instances, the immune system fails, and can be deceived by confounding events. These glitches are to be blamed for autoimmune ailments, ineffective immunotherapies and adverse reactions to biologic-based therapies.

Qualitative narratives of the immune response do not account for the inter-individual variability with regards to autoimmune risk, lack of response to vaccination therapies and adverse response to a therapeutic antibody. This symposium will examine the behavior of the complex, dynamic network with interacting elements including leukocytes, cytokines, and chemokines, with an eye to defining an adequate or inadequate immune response.

Manuel Duval is a bioinformatics scientist doing computational biology research for Drug Discovery and Development. His interest is in characterizing the mode of action of candidate therapeutics agents to cellular systems and to identify the source of inter-individual variability in drug response. Graduated from the Université Joseph Fourier, Grenoble France, Manuel is working in the Drug R&D industry since 2001 following genomics and bioinformatics research at Texas A&M University in the fields of agro-genomics. Manuel Duval is currently leading the bioinformatics and computational biology activity at Enumeral Biomedical in Cambridge MA.

I am currently a postdoctoral research assistant in the Computational Biology and Immunology program at the Memorial Sloan-Kettering Cancer Center (New York, NY). I am currently working on understating the dynamics of cell-cell communications via cytokines in T lymphocytes using both experiments and mathematical modeling. Before joining MSKCC, I was a post-doctoral research assistant in the Department of Biological Sciences, Virginia Tech, investigating effects of intrinsic molecular fluctuations on cell cycle, cell size and cell size control in budding yeast using mathematical modeling. I received PhD degree in theoretical physical chemistry from Jadavpur University in India. My graduate works involved statistical mechanics of reaction rate theory in condensed phase.

I received a PhD in Pathology at SUNY Stony Brook. I was a postdoctoral fellow in the laboratory of Betty Diamond at the Albert Einstein College of Medicine, where I studied B cells and mouse models of lupus. I held faculty appointments at Columbia University Medical Center and then the Feinstein Institute for Medical Research, where I remain as an Adjunct Assistant Investigator. In 2008 I joined Boehringer Ingelheim Pharmaceuticals Inc. Currently, I am a Senior Principal Scientist in the Nonclinical Drug Safety Department. My roles and responsibilities include developing nonclinical safety strategies for immune-targeted therapies and head of the Immunotoxicology group.

Nir Hacohen, PhD is Associate Professor at Massachusetts General Hospital and Harvard Medical School and Senior Associate Member at the Broad Institute. He obtained a PhD in biochemistry from Stanford University, and then was a Whitehead Institute Fellow. His laboratory develops and applies methods to discover genetic and biochemical networks underlying infectious immunity, autoimmunity and tumor immunity. Nir is a founding member of the RNAi Consortium, a public-private partnership that builds lentiviral genome-wide RNA interference libraries to silence every gene of the mouse and human genomes, and a founder of the Broad’s Immune Circuits Initiative. Through these efforts, a community of researchers has employed RNAi technologies to dissect both innate and adaptive immunity processes. Dr. Hacohen’s research has shown that immune cells turn on tailored genetic programs in response to distinct threats, enabling the immune system to distinguish viruses, bacteria, and fungi. He has uncovered key genes underlying the host innate immune response to pathogens, the influenza-host interaction and T cell activation. His current focus is on reconstructing molecular networks of the immune system in mice and humans.

The New York Academy of Medicine

Genome and proteome-scale measurement and perturbation technologies are enabling the reconstruction of molecular networks with increasing mechanistic detail. I will describe our progress in applying these approaches to the identification of key genes involved in innate immune responses to pathogens. In particular, we have initiated a focused, cumulative study of pathogen sensing in one cell type — the mouse dendritic cell — to create a multi-layered network model. I will discuss our progress in developing this model and its potential applications to other biological systems.

Coordination of biological responses to environmental cues is one critical systems-level property of multi-cellular organisms. Understanding how collective response emerges from outputs of individual cell remains challenging: short timescales (initial signaling events within single cells) must be bridged to longer-term responses (cell-cell communication via paracrine regulators or competition for resources). This problem is particularly acute in the context of the adaptive immune systems of metazoans, in which lymphocytes response to pathogens unfold across many space- and time-scales at the population level. Cytokines, as proteins secreted and sensed by cells, constitute natural mediators for such collective communications. We dissect quantitatively how a population of T lymphocytes regulates its production of the cytokine interleukin 2 (IL-2). We uncover a scaling law for the characteristic accumulation of IL-2 as a function of doses of antigenic stimuli, but independently of the size of clonal population. Experimental quantitation and computational modeling highlight new scalable regulatory elements in the IL-2 secretion pathway that are critical to establishing large dynamic range and clonal size independence. We use our computational model to uncover scaling properties of IL-2 dynamics in mixed clones of T lymphocytes and we experimentally verified model’s predictions. Our study demonstrates how populations of cells can generate emerging collective properties by time-integration of individual cell responses.

Immunological pathways are considered to be attractive disease-modifying drug targets due to the prominent role of immune dysregulation in numerous diseases such as cancer, atherosclerosis, autoimmunity, fibrosis and asthma. The ultimate goal for the development of immunomodulatory drugs is to achieve both a favorable efficacy and safety profile. In many instances, safety issues are predictable based on the drug’s mechanism of action and nonclinical safety data. However, unexpected adverse events in the clinic have occurred over recent years, including serious infection, thromboembolic events, cytokine storm and autoimmunity. The complexity of targeting the immune system, lessons learned from recent clinical trials, emerging safety concerns and the future outlook on effectively targeting the immune system will be discussed.