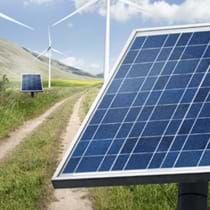 Energy for the Next 20 Years: Protecting the Environment and Meeting Our Demands

Global energy consumption is projected to grow more than 50 percent by 2035, with much of that increase coming from countries outside the United States and Europe. Meanwhile, the world’s total carbon emissions continue to grow, and dams—the planet’s leading source of renewable energy—are often devastating for river ecosystems and people who depend on them. How can Earth possibly meet its growing energy demands without destroying the environment? Experts on wind, nuclear, hydropower and other energy forms debate the most promising paths forward.

Other upcoming events in this series:
• Creating the Next Conservation Movement—Or Do We Even Need One?, February 23, 2012
• Nature and the City: What Good is Urban Conservation?, April 16, 2012
• Beyond Ideology: How Should We Feed Ourselves if We Care About Nature?, May 8, 2012

Stewart Brand is co-founder of Global Business Network and president of The Long Now Foundation. He created and edited the Whole Earth Catalog (National Book Award), and co-founded the Hackers Conference and The WELL. His books include The Clock of the Long Now; How Buildings Learn; and The Media Lab. His recent book, titled Whole Earth Discipline: An Ecopragmatist Manifesto, is published by Penguin in the US and Atlantic in the UK. He graduated in Biology from Stanford and served as an Infantry officer.

Joe Fargione is Lead Scientist for The Nature Conservancy’s North America Region. Joe’s research seeks ways to balance human energy and food demands with environmental conservation. Solutions include appropriate siting of new energy development and new sources for conservation funding including compensatory mitigation payments, carbon offsets, and creating markets that value nature’s benefits. Prior to joining The Nature Conservancy, Joe received his PhD in Ecology from the University of Minnesota and held faculty positions at the University of New Mexico and Purdue University. Joe’s dozens of scientific publications have been cited thousands of times and have been covered by NBC Nightly News, Time Magazine, and The New York Times, among others. Joe is a native of Minneapolis, MN where he resides with his wife and two children.

Jesse Jenkins is Director of the Energy and Climate Program at the Breakthrough Institute, an independent public policy think tank based in Oakland, California. He is the lead author or co-author of numerous reports and analysis including "Bridging the Clean Energy Valleys of Death," "Climate Pragmatism," "Energy Emergence: Rebound and Backfire as Emergent Phenomena," "Where Good Technologies Come From," "Post-Partisan Power," "Strengthening Clean Energy Competitiveness," and widely cited analysis of Congressional climate change legislation. Jesse's work and analysis has been featured in the New York Times, Wall Street Journal, Washington Post, Time Magazine, Newsweek, and other major media outlets. He has appeared on National Public Radio, MSNBC, and in the pages of Forbes, Atlantic Monthly, San Francisco Chronicle, Yale Environment 360 and other publications. Jesse has also served for four years as Associate Director of Breakthrough Generation, the Institute's anual young leaders fellowship program. Prior to joining Breakthrough in June 2008, Jesse worked at the Renewable Northwest Project to advance the development of the Pacific Northwest's abundant renewable energy potential, and he is an alumni of the Robert D. Clark Honors College at the University of Oregon (go Ducks!). Follow Jesse on Twitter: www.twitter.com/JesseJenkins

Arne Jungjohann is the Director for the Environment and Global Dialogue Program of the Heinrich Boell Foundation in Washington DC, a global think tank of the German Green Party. He is recognized for his work on promoting solutions towards a low carbon economy on both sides of the Atlantic. Before joining HBF, Arne worked as a senior advisor for the Green Party in the German Parliament. He has extensive experience on environmental, energy and climate legislation. Among other things, he worked on the implementation of the EU’s cap and trade scheme, Germany’s nuclear phase-out and the Renewable Energy Act. Arne holds a Masters in Political Science of the Free University Berlin and has a passion for soccer.

Jeff Opperman has been working to protect rivers and lakes for nearly 15 years. He has provided strategic and scientific guidance to freshwater conservation projects across the United States as well as in China, Africa and Latin America. At The Nature Conservancy, Jeff focuses on improving the environmental sustainability of hydropower and water management both by advancing sound policies and by supporting on-the-ground projects. He is a member of the governing board of the Low Impact Hydropower Institute (LIHI), which certifies “environmentally preferable” hydropower, and recently served on an Independent Review Panel that provided recommendations for floodplain management to California’s Department of Water Resources.

Jeff earned his B.S. in Biology from Duke University and a Ph.D. in Ecosystem Science from the University of California, Berkeley. He then studied floodplain ecology during a post-doctoral fellowship at the University of California, Davis. His scientific and policy research has been published in journals such as Science, BioScience and Ecological Applications. Jeff strives to communicate the challenges and opportunities of protecting fresh water through his “Cool Green Science” blog on nature.org.