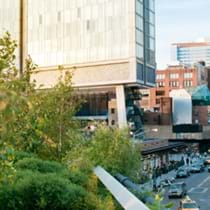 Nature and the City: What Good is Urban Conservation?

From New York's High Line to the Los Angeles River, there's a new energy across the United States about recapturing nature in cities. But can these efforts be about more than building quality of life for urban residents? Can they actually rebuild biodiversity as well (not to mention support for conservation)? Leading scientists, authors and urban conservationists discuss the science behind and promise for today’s urban conservation efforts.

Other upcoming events in this series:
• Energy for the Next 20 Years: Protecting the Environment and Meeting Our Demands, January 12, 2012
• Creating the Next Conservation Movement—Or Do We Even Need One?, February 23, 2012
• Beyond Ideology: How Should We Feed Ourselves if We Care About Nature?, May 8, 2012

Jon Christensen is executive director of the Bill Lane Center for the American West, an interdisciplinary center for research, teaching, and public engagement at Stanford University. Jon has been an environmental journalist and science writer for 30 years. His work has appeared in The New York Times, Nature, Conservation, High Country News, and many other newspapers, magazines, journals, and radio and television shows. Jon came to Stanford on a Knight Journalism Fellowship in 2002, and was a Steinbeck Fellow at San Jose State University in 2003-2004, before returning to Stanford to work on a Ph.D. in American history, the history of the American West,environmental history, and the history of science. For more than a decade Jon's research as a journalist and scholar has focused on measuring conservation and how we can know whether we are achieving the results we hope in our efforts to conserve nature. Jon is currently completing a book entitled "Critical Habitat: A History of Thinking with Things in Nature." His current research focuses on "ecological urbanism," the rich history of efforts to conserve nature in metropolitan regions in the United States and around the world, and what we can learn from those efforts for life on an increasingly urban planet in the 21st century.

Dr. Robert McDonald is Senior Scientist for Sustainable Land-Use The Nature Conservancy. Dr. McDonald researches the impact and dependences of cities on the natural world, and coordinates the Conservancy’s urban conservation work. Dr. McDonald has recently led a NCEAS Working Group into how global urban growth and climate change will affect urban water availability and air quality. He also researches the effect of U.S. energy policy on natural habitat and water use. Prior to joining the Conservancy, he was a Smith Conservation Biology Fellow at Harvard University, studying the impact global urban growth will have on biodiversity and conservation. Dr. McDonald has also taught landscape ecology at Harvard’s Graduate School of Design, helping architects and planners incorporate ecological principles into their projects. He earned his Ph.D. in Ecology from Duke University.

As executive director of the Urban Creeks Council, Phil Stevens has worked for the past five years to pioneer new methods and approaches to urban habitat restoration and management. Prior to that he spent several years working on the other end of the conservation spectrum, helping The Nature Conservancy’s California and Alaska chapters protect much less impacted landscapes. Phil also helped lay the groundwork for TNC’s emerging range-wide Pacific salmon conservation strategy. Phil holds a master’s degree in education and has been at various times a high school history teacher, car mechanic, and horticulturist. He lives in Berkeley, California.

Marielle Anzelone’s work connects people to nature, with a focus on urban ecological issues. She is the founder and Executive Director of NYC Wildflower Week, an organization that produces public cultural and educational programming to engage New Yorkers with the wilds of the Big Apple via institutional partnerships. In May 2012 she is expanding this model to launch National Urban Biodiversity Week in cities across the country. She also advises stakeholders on biodiversity policies, designs sustainable landscapes and teaches at The New School. Her experience centers on people’s daily connections with nearby nature and the role that design and government can play in fostering these relationships.

Marielle is a regular contributor to The New York Times, among other publications. For nearly seven years she conserved, managed and restored the city’s native flora as Botanist with NYC Parks. Except for 15 months in Texas, she has lived among the plants of the New Jersey-New York metro area all of her life.

Susannah received a Bachelors of Arts Degree from Dartmouth College and MArch and MLA degrees from the Harvard Graduate School of Design. She is the recipient of grants from the Graham Foundation, The James Marston Fitch Foundation and the New York State Council on the Arts for research on campus landscapes and large scale urban infrastructure projects. Susannah is the trustee and Past-President of the New York ASLA, is on the board of the Van Alen Institute, serves on the campus design advisory board at Dartmouth College, and is a former director of the Fine Arts Federation and member of the Directors Council of New Yorkers for Parks. In addition to her professional practice, she is an adjunct professor of design at the Harvard Graduate School of Design and at City College of New York. She is a registered landscape architect and a registered architect.