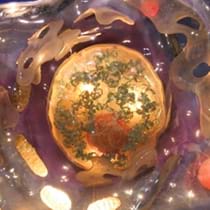 Recent advances of experimental cell biology studies using fluorescence microscopy to follow the time course of fluorescent reporters are opening new vistas into the dynamics of molecules in single cells. The small number of some proteins and RNAs means that the dynamics can be dominated by fluctuations in abundances, which vary from cell to cell, a natural variability sometimes referred to as 'noise'. This symposium brings together systems biologists working on the elucidation of the effects of noise in single cells using mathematical and experimental methods. Speakers will analyze the causes and consequences of these fluctuations, how large-scale changes in gene expression may originate from small-scale fluctuations amplified by a regulatory network, 'bursty' transcription and translation, the transmission of noise in cascades, and the resulting phenotypic variations in single cells that would otherwise be identical.

Grégoire Altan-Bonnet is an Associate Member of the Computational Biology and Immunology programs at the Memorial Sloan-Kettering Cancer Center (New York, NY). He has been leading the ImmunoDynamics group there, since 2005, and was named the Bristol-Myers Squibb/James D. Robinson III Junior Faculty Chair in 2009. His background is in statistical physics and nonlinear dynamics, followed by a PhD from the Rockefeller University in Physics/Biophysics studying molecular recognition with nucleic acids and post-doctoral training in immunology at the NIAID-NIH studying T cell activation.

The MSKCC ImmunoDynamics group specializes in Systems Immunology, to build quantitative models of decision making in the immune system, and better understand and manipulate how self/non-self discrimination at the population level emerges from individual

Narendra Maheshri is an Assistant Professor of Chemical Engineering at the Massachusetts Institute of Technology (MIT). He has bachelor’s degrees in both Chemical Engineering and Biology from MIT, and a PhD in Chemical Engineering from the UC, Berkeley, where he focused on engineering viral vectors for gene therapy. In post-doctoral studies he became interested in systems biology and gene regulation. His current research interests are combining experiments and modeling to better understand and engineer the dynamics of eukaryotic gene regulation and simple regulatory networks, using budding yeast as a model organism. His group also explores methods to translate these fundamental studies into tools for rapidly creating phenotypic diersity in microorganisms.

As an undergraduate my degrees were in pure mathematics and experimental biology at Uppsala University in Sweden, where I continued for a PhD on stochastic processes in cells supervised by two statistical physicists. I then moved to an independent fellowship at Princeton in 2000, and got my first faculty position in Applied Mathematics and Theoretical Physics at the University of Cambridge. I was tenured there in 2005 but decided to move to Harvard University, where I am now in the Dept of Systems Biology and run a group focused on mathematical theory for fluctuations as well as experimental measurements in single cells.

Chris Wiggins is an associate professor of applied mathematics at Columbia University. His research focuses on applications of machine learning to real-world data. This includes inference, analysis, and organization of naturally-occurring networks; statistical inference applied to time-series data; and large-scale sequence informatics in computational biology. A second research area is modeling of stochasticity in regulatory networks. Prior to joining the faculty at Columbia he was a Courant Instructor at NYU and earned his PhD at Princeton University. He originally moved to NYC in 1989 to attend Columbia. Since 2001 he has also held appointments as a visiting scientist at Institut Curie (Paris), the Hahn-Meitner Institut (Berlin), and the Kavli Institute for Theoretical Physics (Santa Barbara). At Columbia he serves as the faculty advisor for the Society of Industrial and Applied Mathematics (SIAM) as well as the Application Development Initiative (ADI).

Single-cell analysis of signal transduction is applied to infer signal network connectivity or to analyze the endogenous phenotypic variability of isogenic populations of mammalian cells.
In a first part, we use single-cell phosphoprofiling to dissect the variability in cytokine response within T lymphocytes. We introduce a new methodology (named “ScatterSlice”) that leverages endogenous variability in expression of signaling components, to quantify their effects on downstream phospho-responses. We used this method to uncover an inverse relationship between responsiveness against two important cytokines (IL-2 and IL-7) in T cells. We have constructed a computational model of the interactions among the various subunits of the IL-2 and IL-7 receptors (e.g. common  chain), as well as with their ligands. To fit the model to the high-resolution data, we have employed a Bayesian framework that penalizes for deviation from both previously defined parameter values and the current data. Using this fitting algorithm, we identified the competition for common  chain as a mechanism for non-independence of IL-2 and IL-7 sensitivity. This single-cell study of differential responsiveness to cytokine among lymphocytes quantifies a key mechanism for the differentiation and survival of memory cells during an immune response.

In a second part, we describe how single-cell analysis of the noise in phospho-protein levels can be exploited to infer signaling network connectivity. Using an extension of the Chemical Langevin Equation theory to the analysis of flow cytometric phosphoproteomic data and accounting specifically for the empirically observed log-normal distributions of phosphoprotein concentration, we demonstrate that the topology of small network configurations, including link directionality (i.e., causality) can be inferred, even in the absence of temporally-resolved data samples. Applications to the MAPK cascade in lymphocytes yield new insights in this well characterized pathway [Work in collaboration with R.Prill, G. Cecchi & Gustavo Stolovitzky – IBM Yorktown Heights, NY]

Intracellular dynamics involves random fluctuations, delays, and nonlinearities—complications that typically make quantitative models analytically intractable. Most biological systems are also sparsely characterized, where one or two steps may be known in detail, others are known only qualitatively, and yet others have not even been identified. I will discuss some general mathematical frameworks that address these problems. I will also present some experimental results that exploit fluctuations to evaluate measured localization patterns in cells.

A variety of experimental results over the past decades provide examples of near-optimal information processing in biological networks, including in biochemical and transcriptional regulatory networks. Computing information–theoretic quantities requires first choosing or computing the joint probability distribution describing multiple nodes in such a network (for example, representing the probability distribution of finding an integer copy number of each of two interacting reactants or gene products while respecting the "intrinsic" small copy number noise constraining information transmission at the scale of the cell). I'll give an overview of some recent analytic and numerical work facilitating calculation of such joint distributions and the associated information, which in turn makes possible numerical optimization of information flow in models of noisy regulatory and biochemical networks. Illustrating cases include quantification of form–function relations, ideal design of regulatory cascades, and response to oscillatory driving.

Positive feedback loops in gene and protein networks are often found in the decision-making circuitry of cells. They allow cells to mount and unambiguous response to external signals such as nutrient responses in microbes, cell-fate decisions in stem cells, and how to fight infections by the immune system. The same underlying interactions enable a population of genetically identical cells to respond heterogeneously to a fixed intermediate signal. The heterogeneous, often bimodal, response can lead to a population exhibiting multiple phenotypes that may often be advantageous.

Here I discuss two examples of transcriptional switches in budding yeast that are capable of generating a bimodal population-level response. These are both epigenetic switches as the particular response is heritable at the single cell level. Both switches rely on biological noise -- small number fluctuations in a particular molecular species. The first trans-encoded epigenetic switch is a synthetic transcriptional positive feedback loop that relies on small number fluctuations in a trans factor -- in this case a transcriptional activator. We use both modeling and experiments to demonstrate how random and intermittent bursts of transcription are necessary for the observed bimodal gene expression that was previously not predicted with deterministic models. The second cis-encoded epigenetic switch is the FLO11 gene, that slowly fluctuates between a silenced and competent promoter state -- a molecular transition that occurs in cis. Using the same modeling approach, we show the kinetic role of different activators is to largely stabilize the active state. In both cases, we highlight how a dynamical view of these switches can help explain both high-level functional behavior and lower level mechanistic details.