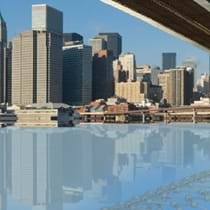 From Richard Feynman to Thomas Edison, New York City has been the birthplace of some of the most renowned physical scientists of the past century. To continue this tradition of fostering and connecting top scientific minds, students and faculty from over a dozen institutions in the New York metropolitan area are bringing together the best in local condensed matter physics for the Gotham-Metro Condensed Matter Meeting. Hosted by the New York Academy of Sciences, this biannual conference is a fantastic chance for faculty, postdocs, and students to share ideas and research with fellow physicists. The conference will include keynote lectures by distinguished speakers in both hard and soft condensed matter physics, student talks highlighting current research, and a poster session presenting research projects from diverse subfields.

There will also be a special panel discussion, "Generation Tech: Tapping NYC's Science & Engineering Talent," moderated by Seth Pinsky, President of the NYC Economic Development Corp, and featuring representatives of the new engineering and applied science institutions that are being created in the city.

Call for Abstracts
The deadline for abstract submissions is Midnight, Wednesday November 7, 2012. For complete abstract instructions, please e-mail: gmcmm@nyas.org. Type the words "Abstract Information" in the subject line — there is no need to type a message. Instructions will be forwarded automatically.

If you are a member of a participating institution, see your student organizer for a registration discount code.

KC Huang was an undergraduate Physics and Mathematics major at Caltech, and spent a year as a Churchill Scholar at Cambridge University working with Dr. Guna Rajagopal on Quantum Monte Carlo simulations of water cluster formation. He received his PhD from MIT working with Prof. John Joannopoulos on electromagnetic flux localization in polaritonic photonic crystals and the control of melting at semiconductor surfaces using nanoscale coatings. During a short summer internship at NEC Research Labs, he acquired an interest in self-organization in biological systems, and moved on to a postdoc with Prof. Ned Wingreen in the Department of Molecular Biology at Princeton working on the relationships among cell shape detection, determination, and maintenance in bacteria. His lab develops computational tools to bridge the experimental regimes of single molecule biophysics and cellular imaging. His current interests include cell division, membrane organization, cell wall synthesis, and membrane-mediated protein interactions, and he enjoys the opportunity to work with scientists from many different backgrounds.

The University of Pennsylvania

Cross-coupled domains or domain walls are of fundamental and technological interests because they may host emergent properties for memory or sensor applications. Using cryogenic magnetic force microscopy, we discovered alternating net moments at ferroelectric domain walls around vortices that can correlate over the entire vortex network in multiferroic hexagonal ErMnO3. The collective nature of domain wall magnetism originates from the uncompensated Er3+ moments and the correlated organization of the vortex network. Our results open the possibilities of electric field manipulation of local magnetic moments by harnessing cross-coupled domain walls.

How cells grow and maintain their integrity is a fundamental questioning all living systems that requires multiple avenues of scientific inquiry. Despite decades of study, an understanding of how the bacterial cell wall is assembled with a robustly maintained micron-scale shape and size has remained elusive. To address this knowledge gap, we have developed a model of rod-shaped cell growth that we use to investigate the roles of spatial regulation of wall synthesis, biochemical properties of the material, and mechanical stretching during insertion. Our studies reveal that rod shape maintenance requires insertion to be insensitive to fluctuations in cell-wall density and stress, and that a helical pattern of insertion is sufficient for elongation without significant loss of shape. In addition, we present evidence that left-handed chirality of the cytoskeleton in Escherichia coli gives rise to a global, right-handed chiral ordering of the cell wall. Local, cytoskeletal-guided insertion of material into the peptidoglycan network naturally orders the sugar strands comprising the wall and causes cells to twist left-handedly during elongational growth. Through comparison with the right-handed twisting of Bacillus subtilis cells, our work supports a common mechanism linking helical insertion and chiral cell-wall ordering in rod-shaped bacteria. Finally, we use molecular dynamics simulations to support a hydrolysis-dependent curvature-based model of FtsZ force generation. Upon integration of this force generation into our cell-wall model, we find that cleavage of misaligned glycan strands is likely to be a critical element of robust constriction during cell division. These physical principles of cell growth link the molecular structure of the bacterial cytoskeleton, mechanisms of wall synthesis and the coordination of cell-wall architecture.

In this work, we explore square arrays of cylindrical microposts as a means for controlling the director alignment in nematic chromonic liquid crystal films. We find through both experiment and numerical solutions that such micropost arrays create a bistable average alignment of the director in the film along either diagonal of the micropost lattice. We stabilize large domains of a single director orienation by adding a preference for director alignment along a single diagonal via an established alignment technique. Additionally, we find the aligning effects of the micropost to outweigh the previously established alignment technique for CLCs when placed in direct competition.

The catalyst-free chemical vapor deposition of graphene-like (GL) films (nano-crystalline graphite films) from methane on single crystal quartz substrates is reported. The GL films have been characterized by means of Raman spectroscopy, atomic force microscopy and electrical measurements. Raman spectroscopy reveal nanocrystalline structure of the films grown at different conditions. The thinnest GL films obtained so far have a thickness of 1.5 nm, a relatively rough surface structure and an electrical conductivity in the range of 20 kohm/square. Low temperature Hall-effect measurements performed on these films have revealed that the major charge carriers are holes with a mobility of 40 cm2/Vs at room temperature. The high chemical sensitivity of GL films has been demonstrated by measuring the change of their conductance during exposure to a NO2-containing atmosphere. The stimulating action of ultraviolet light illumination on the chemical sensitivity has been found to be comparable with that of graphene based sensors. A detection limit of 40 ppb (part-per-billion) of NO2 diluted in an inert atmosphere has been estimated from the signal-to-noise ratio analysis. The optimal electrical conductance, high chemical sensitivity, as well as the simple growth method, make the GL films promising for practical applications as a chemically sensitive material.

Athermal particulate systems such as foams and granular media are out-of-thermal equilibrium and therefore must be externally driven using shear or vibration to explore different configurations. Of particular interest is being able to predict and control the structural and mechanical properties of athermal systems as a function of the driving mechanism. In this work, we show numerically how particle collisions in cyclically sheared hard sphere systems can lead to microreversibility. We map out the steady-state "phase diagram" as a function of packing fraction (φ) and strain amplitude (γmax), and identify "point-reversible" states at low φ and γmax in which particles do not collide over the course of a shear cycle, and "loop-reversible" states at intermediate φ and γmax in which particles undergo numerous collisions but return to their initial positions at the end of each shear cycle. Loop-reversibility is a novel form of self organization that gives rise to non-fluctuating dynamical states over a broad range of packing fractions from contact percolation to jamming, i.e. φP=0.55 to φJ=0.84 in two dimensions.

Bolometers are electromagnetic radiation detectors that employ heating of a radiation absorber which has a temperature-sensitive electrical property. Graphene is an attractive choice for a fast and sensitive bolometric detector due to its weak electron-phonon coupling, low heat capacity and the ultra small volume. We report fabrication of Graphene-superconductor hybrid devices with titanium oxide tunnel barrier and characterization of its bolometric response. Below superconducting critical temperature, when biased within the superconducting gap, device has a temperature sensitive dynamic resistance. Application of radiation changes the dynamic resistance through electronic heating. The relation between electron temperature rise and absorbed radiation power is measured, from which the bolometric parameters of heat conductance and noise equivalent power are calculated. This device scheme provides impedance matching with microwave antenna needed to achieve efficiencies for practical application.

Quantum computing and information processing use quantum two level systems as their building blocks. Solid-state implementations of quantum bits use, for example, single or few electron spins confined to small spatial dimensions. Harnessing the interaction of such electron spins with their environment offers intriguing possibilities for coherent electrical manipulation and controlled generation of entanglement with promising applications in nanoscale imaging and metrology.