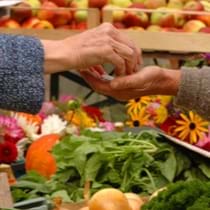 The Science of Local Food

Presented by Science & the City, the Sackler Institute for Nutrition Science, and New Amsterdam Market

From improved nutrition to better environmental stewardship, local food systems have been offered as a panacea for much of what ails us. Culturally, local food systems connect us in a way that builds communities between rural and urban families, producers and consumers.

While many of us love knowing where our food comes from—and often the farmer who grew it—does science back up the idea that local food is more nutritious? Can it improve our environment? Does the food taste better?

Join us for a panel discussion, moderated by New Amsterdam Market's Founder and President, Robert LaValva, on the intersection of the science and culture of local food. The panel will also include a prominent chef, a local farmer, and a specialist on the impact of local foods in terms of economics and sustainability.

After the discussion, taste some delicious local foods.

This event will be held at the South Street Seaport Museum's Melville Gallery located at 213-215 Water Street.

This event is free but registration is required.

This event is part of our Locavore's Dilemma Series.

More and more, people are starting to ask serious questions about where their food is coming from and what exactly it contains. Some New Yorkers have even become devoted locavores—making sure all their food comes from within 500 miles of home. But that's no easy feat, and how do the rest of us figure what the best food choices are? In this 3-part series, Science & the City will examine some tough questions surrounding local food. Plus, you'll get to sample local treats at each event!

Join us for this special series:

• The Science Behind the Hype: Resveratrol in Wine & Chocolate, June 5

Robert LaValva grew up in central New Jersey and also spent some years in Rome, Italy. He attended New York University as an undergraduate, where he studied urban history and planning. After obtaining a Masters in Architecture from the Harvard Graduate School of Design, he worked for the City of New York, Department of Sanitation as a planner for nearly ten years, where he helped design and implement one of the nation's most innovative and extensive urban composting programs. He left government to pursue his interest in food systems and regional development, and worked briefly for the international Slow Food organization, whose US headquarters are located in New York. There, he he instituted the nation's first consortium for raw milk cheese producers; worked on programs to help preserve heritage animal breeds and heirloom fruits and vegetables; and managed Slow Food’s Urban Harvest festival, which was held as the first New Amsterdam Market on October 2, 2005. Robert has devoted most of his efforts towards this project since then; he also teaches a yearly course (on observing the urban environment) at New York University.

Jennifer Phillips received her PhD in Soil, Crop and Atmospheric Science from Cornell in 1994. She did post-doctoral studies at the NASA Goddard Institute for Space Studies on the Columbia University campus on climate change impacts on agricultural production, then moved into the research area of the use of climate predictions in farm management, focusing on Southern and East Africa. In 1999, she took a post at the International Research Institute for Climate Prediction, also under the umbrella of the Columbia Earth Institute, where her work focused on improving communication of seasonal forecasts to minimize risk in decision making. She has managed two grants from NOAA's Office of Global Programs for research in Africa. Her current project, with Co-PI Ben Orlove of UC Davis, looks at improving forecast communications through rural radio in local languages in Uganda. She hopes to transition her research to the Northeastern US so she can be near her current position teaching in the Center for Environmental Policy at Bard College. In her spare time, Jennifer raises sheep and chickens on a small farm in the Hudson Valley.

Brian Halweil is the editor of Edible East End as well as the publisher of Edible Brooklyn and Edible Manhattan. He is also a senior fellow at the Worldwatch Institute and is currently Co-Director of the Nourishing the Planet project. He joined Worldwatch in 1997 as the John Gardner Public Service Fellow from Stanford University, where he had established a student-run farm on campus. As a food and agriculture expert, Brian has testified before the U.S. Senate on biotechnology, poverty, and hunger, and his research and writing have been featured in national media. He is the author of Eat Here: Homegrown Pleasures in a Global Supermarket, and he lives in Sag Harbor, New York, where he and his family keep a home garden and orchard, and raise oysters.

Peter Hoffman, one of the first NYC chefs to be notably obsessed with the Union Square Greenmarket, has just opened a new location of his casual East Village restaurant Back Forty in the space of his Soho icon Savoy. The 85-seat restaurant, Back Forty West, will serve a menu from Back Forty's longtime chef Shanna Pacifico that is similar to that of its four year-old sister.