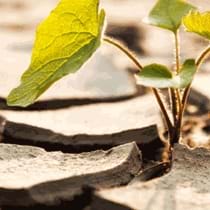 Will Technology Let Us Avoid the Limits to Growth?

2012 marks the 40th anniversary of the publication of The Limits to Growth.

Using a dynamic interactive modeling approach, the book explored possible paths of economic development for the planet and their associated costs. Assuming finite recoverable resources and limits on ecological resilience, the book reported its simulations as showing dire consequences for many of the most likely paths. These outcomes were predicted to be realized in the present century.

The book unleashed a debate in 1972 that has not stopped. Technological optimists dismissed the imminence, even over the course of a century, of any natural limit to economic expansion. Over the last 40 years, the new field of Industrial Ecology has developed analytical methods that can turn the theoretical controversy about "the limits to growth" into more focused and answerable questions.

This meeting will assess the state of the world economic-environmental complex as it is now, compared to the possible paths projected in 1972. It will discuss how our actions going forward may affect our future prospects.

Featured will be Dennis Meadows, a principal co-author of The Limits to Growth, and Thomas Graedel, Director of the Center for Industrial Ecology at Yale and editor of the recent book Linkages of Sustainability.

The meeting will consider very basic questions about the future of the planet:

How likely is it that advances in technology will allow us to avoid overshoot and collapse due to resource and ecological limits?

What would a sustainable future look like -- one that we could realistically hope to achieve?

What changes in behavior and cultural expectations would be needed to attain such a future, in addition to changes in resource utilization and technology?

Technology Alone Will Not Give Us Sustainability
Dennis Meadows, PhD, Author

Dennis Meadows was on the faculty of MIT, Dartmouth College, and the University of New Hampshire from 1969 until becoming Emeritus Professor of Policy Systems in 2004. During 34 years as an academic he directed two major university centers for public policy. His diverse work earned him tenure in schools of engineering, management, and social sciences. He co-authored 10 books and created strategic planning games that are used around the world to teach adults principles of more sustainable resource use. The books have been translated into about 35 languages. One of them was selected as the most important book on the future to be published in the German language in 2006. He has received numerous honorary doctorates from American and European universities for his contributions to environmental education. Among his many awards were the Japan Prize and the Hungarian Presidential Medal of Honor.

Thomas Graedel is Professor of Industrial Ecology in the School of Forestry and Environmental Studies, Yale University. His research is centered on developing and enhancing industrial ecology, the organizing framework for the study of the interactions of the modern technological society with the environment. His textbook, Industrial Ecology, coauthored with B. R. Allenby, was the first book in the field and is now in its third edition. His current interests include studies of the flows of materials within the industrial ecosystem, and of evaluating the criticality of metals. He was elected to the U.S. National Academy of Engineering in 2002 for “outstanding contributions to the theory and practice of industrial ecology.”

Technology Alone Will Not Give Us Sustainability

Our 1972 report, The Limits to Growth, described the features of the global system that predispose it to end its physical growth phase through overshoot and collapse rather than through an asymptotic approach to its limits. I will briefly summarize that original argument and then explain why technological advance does not alter the tendency towards collapse. It is in any event, far too late to seek any attractive equilibrium, since in the past four decades humanity has raised its material and energy demands far, far above sustainable levels. For that reason the effort to increase resilience will now be much more rewarding than efforts to achieve sustainable development.

Much of our modern life is tied to increasingly intricate technology, embodying ever larger numbers of materials to achieve greater and greater performance. Is this approach wise, and is it sustainable over the long term? This presentation will discuss common examples of modern technology, their material basis, and their ability (or lack thereof) to avoid Malthus’s limits to growth and thereby sustain Earth’s peoples.