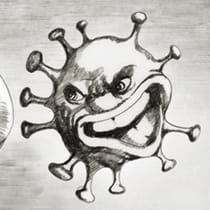 Swine Flu. SARS. Ebola. Over the past several years, it feels like the planet is awash in infectious diseases just waiting to get into our systems and wipe us off the face of the earth. Popular films such as Contagion have captured the public imagination, while trying to paint a scientifically accurate portrait of just how close we might be to the next global pandemic.

Dr. Ian Lipkin served as the science adviser for the film Contagion while Dr. Dan Jernigan is a captain in the US Public Health Service. Both scientists have dedicated their lives to understanding and preventing global pandemics of epic proportions. David Quammen goes right to the source of where diseases jump between animals and humans and journalist Maryn McKenna works the emerging infectious beat.

This October, go beyond the silver screen and learn about the science behind real-life emerging infectious diseases from leading virologists and journalists.

In this series we're looking at some of the ways the Seven Deadly Since show up in the sciences. To do that, we're bringing together top scientists, authors, chefs, urban planners, and many others to help us explore our baser nature. Each event will feature indulgent receptions afterwards, as well as opportunities for you to interact with the speakers and one another. Join us for this vice-ridden round of events!

David Quammen is a science, nature and travel writer whose work has appeared in publications such as National Geographic, Outside, Harper's, Rolling Stone, and The New York Times Book Review. He wrote a column, called "Natural Acts," for Outside magazine for fifteen years. Quammen lives in Bozeman, Montana.

W. Ian Lipkin, MD, John Snow Professor of Epidemiology and Professor of Neurology and Pathology at Columbia University is internationally recognized for the development and implementation of molecular methods for microbial surveillance and discovery. He directs the Center for Infection and Immunity, the World Health Organization Collaborating Centre on Diagnostics, Surveillance and Immunotherapeutics for Emerging Infectious and Zoonotic Diseases, and the Northeast Biodefense Center, and is co-chair of the National Biosurveillance Advisory Subcommittee. A graduate of Sarah Lawrence College, he obtained his MD at Rush Medical College, Medicine Residency at the University of Washington, Neurology Residency at the UCSF, and Fellowship with Michael Oldstone at The Scripps Research Institute. He served in Beijing as an intermediary between the WHO and the Chinese government during the SARS outbreak of 2003, and co-directed SARS research efforts in China with current Minister of Health Chen Zhu.

Daniel B. Jernigan, MD, MPH, is a captain in the United States Public Health Service and serves as the deputy director of the Influenza Division in the National Center for Immunization and Respiratory Diseases (NCIRD) at CDC. In his current role, Dr. Jernigan serves as senior medical officer and senior Public Health Service officer for the Influenza Division. He is responsible for oversight and direction of approximately 300 staff members with primary supervision of budget, communications, policy, preparedness and program support. In addition, he serves as a principle investigator for influenza research and public health evaluation activities.

Maryn McKenna is a journalist and author who specializes in public health, global health and food policy. She is a blogger for Wired, a columnist and contributing editor for Scientific American, and a Senior Fellow of the Schuster Institute for Investigative Journalism at Brandeis University. Her work has appeared in SELF, the Guardian, Nature, the Atlantic, China Newsweek and many other publications. She is the author of SUPERBUG (Free Press/S&S, 2010) and BEATING BACK THE DEVIL (FP/S&S, 2004). She has embedded with teams from the Centers for Disease Control and the World Health Organization to report on malaria, polio, West Nile virus, MDR TB, SARS, Hurricane Katrina, the Indian Ocean tsunami, and the anthrax-letter attacks on Capitol Hill. She graduated from Georgetown University and has a master's degree from Northwestern University.