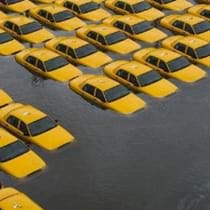 Adapting Cities to Climate Change in a Post-Sandy World

The impact of Hurricane Sandy on New York City and surrounding areas has urban planners and government officials considering adaption strategies for climate change with a new sense of urgency. What does the current state of science tell us about what cities should be doing to prepare for these effects—particularly if they are much more intense than previously assumed? And what role can natural habitats play in helping cities prepare?

After nearly 15 years reporting for The New York Times, Andrew C. Revkin left the staff at the end of 2009 to become a senior fellow at Pace University's Pace Academy for Applied Environmental Studies. He continues to write the Dot Earth blog, which has moved from the news side of The Times to the Opinion section. He reported on the global environment in print and on Dot Earth. He has spent a quarter century covering subjects ranging from Hurricane Katrina and the Asian tsunami to the assault on the Amazon and the troubled relationship of climate science and politics. He has been reporting on the environment for The New York Times since 1995, a job that has taken him to the Arctic three times. In 2003, he became the first Times reporter to file stories and photos from the sea ice around the Pole. He spearheaded a three-part Times series and one-hour documentary in 2005 on the transforming Arctic and another series, "The Climate Divide," on the uneven impacts of climate change. He has written books on the Amazon rain forest, global warming and the once and future Arctic. Before joining The Times, Mr. Revkin was a senior editor of Discover, a staff writer for the Los Angeles Times, and a senior writer at Science Digest. Mr. Revkin has a biology degree from Brown and a Master's degree in journalism from Columbia. He has taught at Columbia's Graduate School of Journalism and the Bard College Center for Environmental Policy. He lives in the Hudson River Valley with his wife and two sons. In spare moments, he is a performing songwriter and multi-instrumentalist who occasionally accompanies Pete Seeger at regional shows and plays in a folk-roots band, Uncle Wade.

Dr. Jacob is a geophysicist teaching Disaster Risk Management at Columbia University's School of International and Public Affairs and a semi-retired researcher at Columbia's Lamont-Doherty Earth Observatory. His current research focuses on how climate change and sea level rise will impact the infrastructure of major coastal cities. He serves on the New York City Panel on Climate Change and has led studies assessing the vulnerability of New York City's transit and telecommunications infrastructure for both New York State and the Metropolitan Transportation Authority. He is a co-author of the National Research Council's 2008 report, "Potential Impacts of Climate Change on U.S. Transportation." His past research has focused on engineering seismology, earthquake hazards and loss assessments from New York to Alaska.

Jacob was one of 50 people to be listed in Time magazine's, "People Who Mattered in 2012," for his warnings of the catastrophic damage that a 100-year storm surge could do to New York City's transit system.

Dr. Radley Horton is an Associate Research Scientist at the Center for Climate Systems Research at Columbia University. He is a Convening Lead Author for the Third National Climate Assessment. He is also Deputy Lead for NASA's Climate Adaptation Science Investigator Working Group. He served as the Climate Science Lead for the New York City Panel on Climate Change, and is a Co-Lead for the NOAA-funded Consortium for Climate Risk in the Urban Northeast. Research interests include sea level rise, Arctic sea ice, regional climate projections, and adaptation to climate variability and change.

Dr. Robert McDonald is Senior Scientist for Sustainable Land-Use The Nature Conservancy. Dr. McDonald researches the impact and dependences of cities on the natural world, and coordinates the Conservancy's urban conservation work with Laura Huffman. Dr. McDonald has recently led a NCEAS Working Group into how global urban growth and climate change will affect urban water availability and air quality. He also researches the effect of U.S. energy policy on natural habitat and water use. Prior to joining the Conservancy, he was a Smith Conservation Biology Fellow at Harvard University, studying the impact global urban growth will have on biodiversity and conservation. Dr. McDonald has also taught landscape ecology at Harvard's Graduate School of Design, helping architects and planners incorporate ecological principles into their projects. He earned his PhD in Ecology from Duke University.

Dr. Nicole Maher is the Senior Coastal Scientist with The Nature Conservancy on Long Island. Dr. Maher works on wetland conservation and restoration projects by partnering with members of the scientific community, public agencies, and other conservation organizations. Dr. Maher is one of the founding members of coastalresilience.org, an online climate adaptation tool. She is working with the New York City Department of Parks and Recreation to identify opportunities for marsh protection and restoration within city limits. She also leads a project to assess whether salt marshes from New York City to eastern Long Island are keeping pace with sea level rise, in addition to and working with academic and government research partners to determine the reasons for elevation shortfalls. Nicole earned her BA in Biology and Environmental Studies from Bowdoin College. She earned her M.S. in Marine Environmental Studies and her PhD in Marine and Atmospheric Sciences with a concentration in Biological Oceanography from Stony Brook University.

James S. Russell is the architecture critic for Bloomberg News, which reaches 260,000 professionals and 350 publications worldwide. Mr. Russell's commentaries also appear in Bloomberg Businessweek and the Bloomberg Muse website. He has been a guest on Bloomberg radio and TV.

His book, The Agile City: Building Well Being and Wealth in an Era of Climate Change, was published by Island Press in 2011. New York magazine's Justin Davidson wrote, "There's more common sense and intelligence on each page than most writing on this topic can squeeze out of an entire book."

For 18 years Mr. Russell was an editor at Architectural Record magazine, the premier American journal for practicing architects, helping it to earn a National Magazine Award for General Excellence (2003) as well as numerous other industry awards.

Mr. Russell is an adjunct professor at the Spitzer School of Architecture of the City College of New York. He is a registered architect, elected a Fellow of the American Institute of Architects, and resides in New York City.