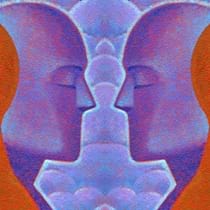 Presented by The Nour Foundation, The New York Academy of Sciences, and Wisconsin Public Radio's nationally-syndicated program To the Best of Our Knowledge

Video of the full event is available on the Nour Foundation website.

This event is part of the Rethinking Mortality series.

For millennia, human beings have wondered what happens when we die. What is the first-person experience of dying and being brought back to life? Technological advances in resuscitation science have now added an intriguing new chapter to the literature of "out of body" or "near death experiences" by eliciting detailed and vivid accounts of those who have approached the threshold of death. However we might seek to explain such phenomena, it is no longer tenable to simply dismiss this accumulating body of firsthand experiences. Can these experiences be explained through the lens of biology and neuroscience? What can we learn from the transformative accounts of those who have nearly died? How have their experiences affected their sense of self and identity? Join neurologist Kevin Nelson, psychiatrist Peter Fenwick, critical care physician Sam Parnia, and orthopedic surgeon and drowning survivor Mary Neal as they share some of these remarkable stories and discuss how they analyze such experiences in light of their own backgrounds and training.

Emeritus Consultant Neuropsychiatrist, Maudsley Hospital, John Radcliffe Hospital, and Broadmoor Hospital
Author of The Truth in the Light: An Investigation of over 300 Near-death Experiences

Orthopedic Surgeon and drowning survivor
Author of To Heaven and Back

Professor of Neurology, University of Kentucky Medical Center
Author of The Spiritual Doorway in the Brain: A Neurologist's Search for the God Experience

This event is part of The Rethinking Mortality Series

Moderated by Steve Paulson, Executive Producer of Wisconsin Public Radio's To the Best of Our Knowledge, this four-part lecture series brings together leading experts from various fields to discuss how the latest research is challenging our understanding of the very nature of mortality.

Emeritus Consultant Neuropsychiatrist, Maudsley Hospital, John Radcliffe Hospital, and Broadmoor Hospital
Author of The Truth in the Light: An Investigation of over 300 Near-death Experiences

Peter Fenwick, MB BChir, FRCPsych, is a Fellow of the Royal College of Psychiatrists, and a neuropsychiatrist with an international reputation. He graduated from Cambridge University and subsequently trained in General Medicine, Neurophysiology, Neurology and Psychiatry. Dr. Fenwick became the head of the Neurophysiology, Sleep and Epilepsy Unit at the Institute of Psychiatry & Maudsley Hospital, which he ran for twenty years.  He currently is Emeritus Consultant Neuropsychiatrist at the Maudsley Hospital, the John Radcliffe Hospital in Oxford, and at the Broadmoor Special Hospital for Violent Offenders. Dr. Fenwick has a longstanding interest in the mind/brain interface and the problem of consciousness. He is Britain's leading clinical authority on the near-death experience and President of the British branch of IANDS (The International Association for Near-Death Studies). He has contributed to numerous radio and television programs on this topic, and letters written in response to these have enabled him to create an unparalleled data base of near-death experiences. Dr. Fenwick has published over 240 papers in medical and scientific journals and also several books, including The Art of Dying (2008) and The Truth in the Light: An Investigation of over 300 Near-death Experiences (1997), co-authored with his wife, Elizabeth Fenwick.

Orthopedic Surgeon and drowning survivor
Author of To Heaven and Back

Dr. Mary Neal is a board-certified orthopedic spine surgeon who graduated from the University of Kentucky before attending the UCLA medical school. She completed her orthopedic surgery training at the University of Southern California, after which she lived in Sweden, Switzerland, and Los Angeles while undergoing 1 1/2 years of spine-specialty training before becoming the director of spine surgery at USC. After five years, she left the University, and her family moved to Jackson Hole, Wyoming, where she continues to live and work. Dr. Neal is the author of To Heaven and Back, about her life-changing, life-after-death experience after drowning while kayaking on a South American river.

Professor of Neurology, University of Kentucky Medical Center
Author of The Spiritual Doorway in the Brain: A Neurologist's Search for the God Experience

Raised along the shore of Lake Michigan, Dr. Kevin Nelson then attended Michigan State University before entering the University of Michigan Medical School. Afterwards he trained in neurology at the University of New Mexico, and then joined the faculty at the University of Kentucky where he practices clinical neurology and neurophysiology, enabling him to study the brain processes of spiritual experience for more than 25 years. Presently, as a physician leader, Dr. Nelson oversees the medical and surgical practice of 1,300 University of Kentucky Healthcare Enterprise physicians and other providers. He serves on the Board of Directors of the American Association of Neuromuscular & Electrodiagnostic Medicine, the foremost national society devoted to the research and practice of neuromuscular medicine. Dr. Nelson's recent book, "The Spiritual Doorway in the Brain" is praised by neurologist Oliver Sacks as "A landmark in our understanding of human nature".

Dr. Sam Parnia is an Assistant Professor of Medicine at the State University of New York at Stony Brook. He received his medical degree from the Guys and St Thomas’ Hospitals (UMDS) of the University of London in 1995 and his PhD in cell biology from the University of Southampton in the UK in 2006. Dr. Parnia has trained extensively both in the UK and the USA where he completed his medical residency at the Universities of Southampton, UK and Weill Cornell Medical Center in New York, USA. He completed his fellowship training in Pulmonary and Critical Care Medicine at the University of London and the Weill Cornell Medical Center in New York, USA in 2010. He joined the faculty at Stony Brook Medical Center as a member of the Pulmonary, Critical Care and Sleep Division, of the Department of Medicine in 2010. Dr Parnia’s clinical and research areas of expertise are in cardiac arrest resuscitation, brain resuscitation and the cognitive sequelae of surviving cardiac arrest including near death experiences. He is director of Resuscitation Research at the State University of New York in Stony Brook, USA and an honorary fellow at Southampton University Hospital, UK. Dr Parnia currently directs a number of international studies focusing on the quality of brain resuscitation as well as the cognitive and mental processes that occur during cardiac arrest including near death experiences. As well as publishing in leading scientific and medical peer reviewed journals he is also the author of two popular science books, Erasing Death (2013) and What Happens When We Die? (2006). His work has featured in many newspapers and magazines all over the world including the Guardian, Telegraph, GQ, Psychology Today, Time, Newsweek, as well as on the BBC and CNN. He also contributes regularly to TV and radio discussions and continues to divide his time between hospitals in the UK and US.

Executive Producer, Wisconsin Public Radio's nationally-syndicated program To the Best of Our Knowledge.

Steve Paulson is the executive producer and an interviewer with To the Best of Our Knowledge, the Peabody Award-winning radio program produced at Wisconsin Public Radio and syndicated nationally by Public Radio International. Paulson has written for Salon, Slate, Huffington Post, The Chronicle of Higher Education, The Independent and other publications. His radio reports have also been broadcast on NPR's Morning Edition and All Things Considered. His recent book, "Atoms and Eden: Conversations on Religion and Science," was published by Oxford University Press.