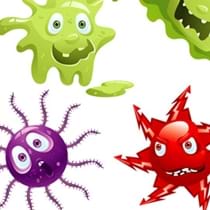 Hats Off to Bacteria!

Bacteria rule our world—inside and out. And in the past decade researchers have observed a strong connection between our bodies and the billions of bacteria that call us home. From probiotics to fecal transplants, science and medicine are gaining a better understanding of how influencing our microbiome can lead to dramatic health benefits.

Join us to learn about our basic microbial ecology; how our gut bacteria are linked to diabetes and obesity; how newborns are first colonized by bacteria; and how treatments are changing people's lives one single-celled organism at a time.

Dr. Lawrence Brandt is a Professor of Medicine and Surgery at the Albert Einstein College of Medicine. Dr. Brandt's research interests include ischemic and vascular disorders of the gastrointestinal system, inflammatory bowel diseases, colitis, geriatric gastroenterology, AIDS, and endoscopic technique. Amongst his contributions are: the performance of the first non-operative gastric polypectomy; the demonstration that gastrointestinal bacteria produce cobamides from dietary vitamin B12 that may inhibit vitamin B12 absorption; that metronidazole can heal and maintain healing of perineal Crohn's disease; that most cases of newly diagnosed IBD in the elderly are actually ischemic colitis misdiagnosed as ulcerative or Crohn's colitis; the classification of ischemic colitis and description of its natural history; the first demonstration of laser-induced regression of Barrett's epithelium; the development (and U.S. patent) of a cytology balloon [to diagnose infectious esophagitis in AIDS patients]; and use of fecal transplantation to treat chronic and recurring C. difficile colitis. Long-standing major interests are the patient-doctor relationship and the way that a patient's psychologic makeup influences his/her illnesses and treatments.

Martin J. Blaser, MD, is the George and Muriel Singer Professor of Medicine, Professor of Microbiology, and Director of the Human Microbiome Program at the NYU School of Medicine. He served as Chair of the Department of Medicine at NYU from 2000–2012. A physician and microbiologist, Dr. Blaser is interested in understanding the relationships we have with our persistently colonizing bacteria. His work over the past 30 years has largely focused on Helicobacter pylori and Campylobacter species, which are important as pathogens, and as model systems for understanding interactions of residential bacteria with their human hosts. He is actively studying the relationship of the human microbiome to health and disease. Over the past 30 years, Dr. Blaser has served as the advisor for a large number of students, post-doctoral fellows, and junior faculty, and he has been actively involved in scientific and professional organizations. He served as President of the Infectious Diseases Society of America, Chair of the Board of Scientific Counselors of the National Cancer Institute, and Chair of the Advisory Board for Clinical Research of the National Institutes of Health. He currently serves on the Scientific Advisory Board of the Doris Duke Charitable Foundation. He was elected to the Institute of Medicine and the American Academy for Arts and Sciences. He holds 24 US patents relating to his research, and has authored over 500 original articles.

The focus is on how these interactions drive microbial evolution, diversity and symbiosis. Her lab study the bacterial microbiota in vertebrates, including birds and mammals, and we have lead studies using next-gen sequencing of the human microbiome in peoples with different levels of integration to Western lifestyles, in the Amazon region.

Christine Gorman is the senior editor in charge of health and medicine features for Scientific American. Gorman began her publishing career at Time magazine, where she worked for more than 20 years in the business, nation, science and health sections. She inaugurated the magazine's personal health section, which won awards from the National Press Club and the Deadline Club. Her cover stories, which addressed such topics as AIDS, anxiety, cancer, diabetes and sleep disorders, consistently ranked among the magazine's top sellers each year. Gorman received a 2008 Nieman Fellowship to study global health at Harvard University, followed by a three-month reporting trip to investigate the nursing crisis in Malawi.