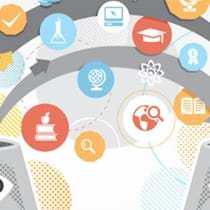 Presented by the Center for Teaching Excellence at New York University

This symposium features panel presentations by three distinguished science educators—representing the disciplines of chemistry, biology, and physics—who will share their experiences and insights about undergraduate science education. Drawing on general educational principles and discipline-specific themes, the presentations will highlight research-based innovations in curriculum design, pedagogy, and assessment that enable students to learn science more effectively. These methods include active learning, scientific teaching, and a focus on student learning outcomes. Following the presentations, participants will engage in a roundtable workshop session with the goal of implementing a teaching innovation within their own science courses and assessing its impact on student learning. The symposium will provide faculty members, postdocs, and graduate students in a range of disciplines with the knowledge and skills to improve teaching and learning in undergraduate science courses.

Dr. Michael Purugganan received his B.S. in Chemistry from the University of the Philippines (1985), an M.A. from Columbia University (1986) and a Ph.D. in Botany with a Global Policy minor at the University of Georgia (1993). After obtaining his Ph.D., he did postdoctoral research as an Alfred P. Sloan Molecular Evolution Fellow at the University of California in San Diego, studying the evolution of development (1993-1995). Dr. Purugganan is a leader in the field of evolutionary and ecological genomics and his work focuses on identifying the molecular basis for evolutionary adaptations that occur in nature. Prior to joining the NYU faculty in 2006, he was the William Neal Reynolds Distinguished Professor of Genetics at North Carolina State University, where he also won the Outstanding Faculty Research Award and the Sigma Xi Research Prize. He is the recipient of an Alfred P. Sloan Foundation Young Investigator Award, a Guggenheim Fellowship, is a Kavli Fellow, and in 2005 was elected a Fellow of the American Association for the Advancement of Science. Dr. Purugganan is on the editorial boards of the journals Genome Biology and Evolution, Molecular Ecology, Trends in Plant Science and the Annual Review of Ecology, Evolution and Systematics.

Brian P. Coppola is Arthur F. Thurnau Professor of Chemistry at the University of Michigan. He received his B.S. degree from the University of New Hampshire and his Ph.D. in Organic Chemistry from the University of Wisconsin-Madison. Prof. Coppola currently serves as the department’s Associate Chair for Educational Development and Practice, and as the Associate Director for the University of Michigan-Peking University Joint Institute, in Beijing, China. In 1999, Dr. Coppola received the Amoco Foundation Award for Excellence in Undergraduate Teaching, and in 2002 he was elected as a Fellow of the American Association for the Advancement of Science. In 2003, he received the Kendall-Hunt Outstanding Undergraduate Science Teacher Award from the Society for College Science Teachers. In 2004, he was named the State of Michigan Professor of the Year in the CASE/Carnegie U.S. Professor of the Year program; in 2006, he received the American Chemical Society’s James Flack Norris Award; and in 2009, he was selected as the CASE/Carnegie U.S. Professor of the Year (for doctoral institutions). In 2012, he received the Robert Foster Cherry Award for Great Teaching. He is a member of the editorial boards of The Chemical Educator, The International Journal of Science Education, the Journal of Science Education and Technology, and the Journal of Chemical Education. He is an Associate Editor for The Journal for Research in Science Teaching, and he is the Editor in Chief of The Hexagon, the quarterly publication of Alpha Chi Sigma, the professional chemistry fraternity. Prof. Coppola’s publications range from mechanistic organic chemistry research in 1,3-dipolar cycloaddition reactions to educational philosophy, practice and assessment.

Diane Ebert-May is University Distinguished Professor in the Department of Plant Biology at Michigan State University. She received her undergraduate degree from the University of Wisconsin and her M.A. and Ph.D. in Ecology and Evolutionary Biology from the University of Colorado. Prof. Ebert-May provides international leadership for discipline-based biology education research that integrates life sciences and cognitive science. She promotes professional development, assessment and improvement of faculty, postdoctoral scholars, and graduate students who actively participate in creative research about teaching and learning in the context of their scientific discipline. Prof. Ebert-May’s research group developed and tested a model for professional development workshops based on learner-centered teaching, and they continue to investigate the impact of undergraduates’ design and use of models to build conceptual connections across scales in biology. Prof. Ebert-May leads FIRST IV, an NSF-funded professional development program to help postdoctoral scholars create and teach their first introductory biology course in preparation for their future academic positions. Her book, Pathways to Scientific Teaching, is based on active learning, inquiry-based instructional strategies, assessment, and research. She teaches plant biology, introductory biology to majors in a large enrollment course, and a graduate /postdoctoral seminar on scientific teaching. Prof. Ebert-May is a Fellow of the American Association for the Advancement of Science (AAAS). In 2011, she was selected as the CASE/Carnegie Professor of the Year for Michigan, and in 2012 she received the American Institute for Biological Sciences (AIBS) Education Award. Her plant ecology research continues on Niwot Ridge, Colorado, where she has conducted long-term ecological research on alpine tundra plant communities since 1971.

Edward F. (Joe) Redish is a Professor of Physics at the University of Maryland in College Park. He received his undergraduate degree Magna Cum Laude from Princeton University and his Ph.D. in theoretical nuclear physics from M.I.T. in 1968. He has been at the University of Maryland ever since, and served as Chairman of the Department of Physics and Astronomy there from 1982-1985. Since 1985, he has been actively involved in the subject of physics education. His research effort in this area has been devoted entirely to physics education at the college level. Prof. Redish is a Fellow of the American Physical Society, the American Association for the Advancement of Science, and the Washington Academy of Science. He has received many awards for his work in education including the Robert A. Millikan Medal from the American Association of Physics Teachers (1998), the National Science Foundation Director's award as a Distinguished Teaching Scholar (2005), the medal of the International Commission of Physics Education (2012), and the Oersted medal from the American Association of Physics Teachers (2013). He is currently working on a reconstruction of introductory physics for life scientists and pre-medical students.