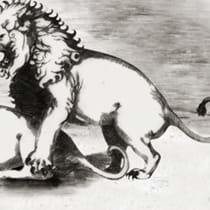 Lust and Love in the Animal Kingdom

From monogamous birds to polygamous primates, we love to point to the animal kingdom to explain our sexual patterns and behaviors. Can swans teach us about monogamy? Is bonobo promiscuity a precursor to our own? Are ferocious creatures like Tyrannosaurus Rex ferocious "in bed" too? And which animals, in turn, just want to cuddle?

Just in time for Valentine's Day, join the Academy as we explore lust and love in the animal kingdom!

Joshua Ginsberg spent 15 years (1980–1995) working on large mammal ecology, conservation and behavior projects in Asia and East and Southern Africa as a faculty member at Oxford University, University College London, and the Institute of Zoology, London. He served as Director of the Asia Program at WCS from 1996–2004, Acting Director of the WCS Africa Program for 10 months in 2002 and Vice President for Conservation Operations from 2003-2009.

Prof. Ginsberg's research interests have shifted from behavioral ecology to studying the factors that influence the persistence of endangered species, particularly (but not exclusively) those living in and around protected areas. While not actively pursuing field research, he is currently working on projects with students that look at the effectiveness of protected areas, and at fragmentation of tropical forests in Asia, and the role of restoration in the recovery of endangered species.

Professor Stephanie Cacioppo (née Ortigue) received her PhD in psychology and cognitive neuroscience from the University Hospital of Geneva (Switzerland) and the University of Savoy (France). Author of over 40 scientific articles, her work focuses on social neuroscience, neurology, implicit cognition, and in particular the consciousness of the interacting brain in social settings. Specifically, she is interested in the modulations of the neural networks mediating social cognition and cognitive interdependence, including the understanding of others' intentions, desires, and complex emotions, in both healthy and clinical populations.

Marina Cords received her BS in Biology from Yale University in 1978, and her PhD in Zoology from the University of California, Berkeley in 1984. She held a Fogarty International Fellowship at the University of Zürich (Department of Ethology and Wildlife Research) in 1985, and returned to the University of Zürich in 1988–1991 with an H.F. Guggenheim Career Development Award. In 1986 and 1987, she held appointments as research scientist at the University of California Primate Center (Davis), and as lecturer at UC Berkeley (Department of Zoology) and Rutgers University (Department of Zoology and Physiology). Since 1991 she has been on the faculty at Columbia University, where she is now professor in the Department of Ecology, Evolution and Environmental Biology (E3B) and also in the Department of Anthropology. Together with colleagues at CUNY and NYU, as well as the American Museum of Natural History and the Wildlife Conservation Society, she oversees the New York Consortium in Evolutionary Primatology (NYCEP), an NSF-funded consortial doctoral program that links behavioral, ecological, conservation, genetic, and morphological research on primates.

Danielle N. Lee is an Outreach Scientist who studies animal behavior and behavioral ecology at Oklahoma State University. While completing her dissertation research on individual differences on exploratory behavior of field mice, she mentored several undergraduate and high school students as biology research assistants. In 2009, she was named the Diversity Scholars Award recipient by the American Institute of Biological Sciences for her contributions to science and promoting diversity within the field. Her outreach efforts emphasize sharing science to general audiences, particularly under-served groups, via outdoor programming and social media. She writes about science, research news, and diversity outreach in science, technology, engineering, and math for several online communities and at her other science blogs: Urban Science Adventures! She tweets @dnlee5

Brian Switek is a freelance science writer specializing in evolution, paleontology, natural history, and the history of science. He blogs regularly at WIRED Science's Laelaps and Smithsonian magazine's Dinosaur Tracking. Brian's critically-acclaimed debut — Written in Stone: Evolution, the Fossil Record, and Our Place in Nature — is now available through Bellevue Literary Press and Icon Books. His next book — My Beloved Brontosaurus: On the Road with Old Bones, New Science, and Our Favorite Dinosaurs — will be published by Scientific American/FSG in April 2013. He tweets @laelaps