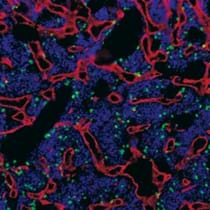 The metabolic needs of cells are determined by function and fate. Pluripotent cells must make the choice to either self-renew, or commit to alternative cell fates. What are the changes in metabolic programs and cell bioenergetics associated with this stem cell choice? Do cell fate decisions determine metabolic activity, or do metabolic switches trigger the commitment to alternative cell fates? How do rapidly proliferating cells signal their comprehensive needs for more ATP, reducing equivalents, and biosynthetic intermediates that provide for growth and division? Can small molecules be used to divert stem cells toward expansion of desired lineages for cell-based therapies? Speakers at this symposium will present their latest metabolomic findings on stem cell metabolism vs. lineage commitment — and how this knowledge may be applied for future therapies.

*Please note: Transmission of presentations via the webinar is subject to individual consent by the speakers. The Introduction (Dr. Gross) and first Keynote Presentation (Dr. Peter Carmeliet) will not be included in the webinar transmission for this symposium, and the anticipated webinar start time is 10:30 AM Eastern Time. To access all speakers' presentations in full, we invite you to attend the live event in New York City.

* Presentation times and titles are subject to change.

Steven S. Gross is Professor of Pharmacology, Director of the Mass Spectrometry Core Facility and Director of Advanced Training in Pharmacology at the Weill Cornell Medical College. The American Chemical Society recently awarded Dr. Gross with a 2011 award for "Achievements in Mass Spectrometry". His primary research interest is in cell–cell communication, with a focus on nitric oxide (NO) and reactive molecules as mediators of cell signaling. In the late 1980s, Dr Gross and colleagues made the initial identification of L-arginine as the precursor of NO in blood vessels. They were also first to establish that NOS inhibition elevates blood pressure in animals, demonstrating that NO plays a physiological role in controlling blood pressure and vascular tone. Since then, research efforts have been directed toward elucidating the enzymes and mechanisms that regulate NO synthesis in cells. His basic studies have provided fundamental insights into the therapeutic control of NO synthesis, resulting in core technologies for the creation of ArgiNOx Inc., a biotech start-up that seeks to develop novel NO-based drugs. Dr. Gross' research is supported in part by a MERIT Award from the NHLBI. He is a founder and Board Director of the Nitric Oxide Society and chairs the Steering Committee of the Biochemical Pharmacology Discussion Group (BPDG) at NYAS. Dr Gross received his PhD in Biomedical Science from the Mount Sinai School of Medicine in New York City.

Peter Carmeliet is Director of the VIB - Vesalius Research Center, at the University of Leuven in Belgium. He graduated as Doctor in Medicine in 1984, and completed his PhD in Medicine in 1989 and his Postdoctoral work at the Whitehead Institute, MIT in Cambridge USA. After his return to Leuven in 1992, Carmeliet started his own research group with a focus on understanding how blood vessels grow (angiogenesis) in health and disease. Carmeliet also documented a novel role for VEGF in neurodegeneration. The Carmeliet lab is currently interested in the role of endothelial cell metabolism in angiogenesis in health and disease

Lewis Cantley, PhD, is the Margaret and Herman Sokol Professor and Director of the Cancer Center at Weill Cornell Medical College/New York Presbyterian Hosptial. Dr. Cantley obtained a PhD in biophysical chemistry from Cornell University in 1975. Prior to taking the position at Weill Cornell, he taught and did research in biochemistry, physiology and cancer biology in Boston, most recently at Beth Israel Deaconess Medical Center and Harvard Medical School. His laboratory discovered the PI 3-Kinase pathway that plays a critical role in insulin signaling and in cancers. Dr. Cantely is a member of the National Academy of Sciences and the American Academy of Arts and Sciences.

Shuibing Chen is an assistant professor in the Department of Surgery and Biochemistry at Weill Cornell Medical College, New York. I received my BS and MS in Chemistry from Tsinghua University in China. Then, I pursued my PhD under the advisement of Dr. Peter G. Schultz at the Scripps Research Institute where I started being interested in chemical biology and stem cell biology. After graduation, I joined Dr. Doug Melton’s laboratory at Harvard University to study the directed differentiation of human embryonic stem cells toward pancreatic lineage. The major research interest in my laboratory at Weill Cornell is to manipulate stem cell fate using chemical and biological approaches and to generate functional tissues and organs that can be used for translational research. Our current main focus is on human pluripotent stem cells(PSCs), including human embryonic stem cells (hESCs) and induced pluripotent stem cells (iPSCs). We combine our knowledge of stem cell biology, developmental biology, chemical biology, medicine chemistry and tissue engineering to derive functional cells, tissues and organs from human pluripotent stem cells. Our long-term goal is to apply patient specific PSC-derived tissues or organs for replacement therapy and build up “disease in a dish” platforms for drug discovery.

Ubaldo Martinez-Outschoorn, MD is Assistant Professor in the Department of Medical Oncology and the Department of Stem Cell Biology and Regenerative Medicine at Thomas Jefferson University, Philadelphia. He received his MD degree from the Complutense University of Madrid and completed his Internal Medicine Training and Medical Oncology training at Thomas Jefferson University. The major focus of his laboratory is to study metabolic interactions between cancer and stromal cells. He also conducts clinical trials studying drugs that alter metabolic interactions between cancer cells and the microenvironment.

The New York Academy of Medicine

Angiogenesis, the growth of new blood vessels, plays a crucial role in numerous diseases, including cancer. Anti-angiogenesis therapies have been developed to deprive the tumor of nutrients. Clinically approved anti-angiogenic drugs offered prolonged survival to numerous cancer patients. However, the success of anti-angiogenic VEGF-targeted therapy is limited in certain cases by intrinsic refractoriness and acquired resistance. New strategies are needed to block tumor angiogenesis via alternative mechanisms. We are therefore exploring whether targeting endothelial metabolism can be a possible alternative therapeutic strategy for anti-angiogenic therapy.

Methylation of histones and DNA plays a critical role in regulating cell differentiation. In the course of evaluating an unusual requirement of threonine (Thr) for the growth of murine embryonic stem cells we found that metabolism of Thr to glycine (Gly) and the subsequent use of the methyl group of Gly for converting homocysteine to methionine is critical for maintaining high levels of S-adenosyl-methionine (SAM) and low levels of S-adenosyl-homocysteine. Importantly, depletion of Thr from the media resulted in decreased tri-methylation of histone H3 lysine-4 (H3K4me3), leading to slowed growth, and increased differentiation. Thus abundance of SAM appears to influence H3K4me3, providing a possible mechanism by which modulation of a metabolic pathway might influence stem cell fate.

Human embryonic stem cells (hESCs) and induced pluripotent stem cells (iPSCs) provide unlimited starting material to generate differentiated cells that can be used to build a functional organ. Essential to this pursuit is an efficient way to differentiate pluripotent stem cells into specific types of mature cells. In this talk, we will focus on our effort to make pancreatic beta cells from hESCs/iPSCs. By mimicking signals used during embryonic pancreatic development, to the extent that they are known, a stepwise protocol is being explored to differentiate hESCs into mature β cells. This involves directing ESCs first to form definitive endoderm, followed by formation of pancreatic progenitors and endocrine progenitors, then endocrine cells, and eventually, insulin+ β cells. Although some progress has been made in ESC differentiation, efficient generation of cells having the complete functional capabilities of mature human cells has not been accomplished. Achieving this goal will require the identification of novel reagents that induce differentiation. Cell-permeable small molecules that can modulate the function of specific proteins provide a convenient and efficient approach to controlling stem/progenitor cell fate.

Lactate and ketone bodies promote tumor growth and metastasis in in vivo xenograft models. Genome-wide transcriptional profiling of human breast cancer cells cultured with lactate or ketones show increased transcription of genes normally associated with "stemness," including genes upregulated in embryonic stem (ES) cells. Similarly, we observe that lactate and ketones promote the growth of bonafide ES cells, providing functional validation. The lactate- and ketone-induced "gene signatures" are able to predict poor clinical outcome (including recurrence and metastasis) in a cohort of human breast cancer patients. Ketone bodies and lactate behave as onco-metabolites, and we directly show that the enzymes associated with ketone body production and re-utilization (HMGCS2, ACAT1/2 and OXCT1/2) are bona fide metabolic oncogenes. Our results mechanistically imply that clinical outcome in breast cancer could simply be determined by metabolic subtype.

Plasticity in energy metabolism enables the orchestratedcommissioning and decommissioning of metabolic pathways allowing stem cells to transit between and to match the divergent bioenergetic demands of self-renewal versus lineage specification. In this context, transition from oxidative metabolism, typical of somatic tissues, into glycolysis is a prerequisite to fuel proficient reprogramming directing a differentiated cytotype back to the pluripotent ground state. Specifically, nuclear reprogramming reverts extensive mitochondrial networks into cristae-poor remnant structures. Metabolomic analysis of extracellular and intracellular metabolites distinguishes derived pluripotent progeny from parental fibroblasts according to elevated glucose utilization and production of glycolytic end products. Real-time assessment of cell bioenergetics has established a functional metamorphosis of oxidative energy metabolism into glycolysis, quantified as a nuclear reprogramming induced reduction in the ratio of oxygen consumption to extracellular acidification rates and a decrease in mitochondrial reserve capacity. Stimulation of glycolysis promotes, while blockade of glycolytic enzyme activity and enhanced oxidative metabolism blunts, reprogramming efficiency. Metaboproteomics has resolved the upregulated glycolytic enzymes and downregulated electron transport chain complex I subunits underlying cell fate determination. Temporal sampling during reprogramming demonstrated glycolytic gene potentiation prior to induction of pluripotent markers. Conversely, redirection of pluripotency into defined lineages requires mitochondrial biogenesis and maturation of efficient oxidative ATP generation and distribution networks to match the evolving bioenergetic demands. The vital function of stem cell metabolism in governing the anabolic/catabolic balance in order to regulate stemness and lineage specification implicates a broader role for metabolic reprogramming in cell fate decisions and determination of tissue regenerative potential.