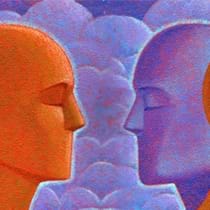 Presented by The Nour Foundation, The New York Academy of Sciences, and Wisconsin Public Radio's nationally-syndicated program To the Best of Our Knowledge

Video of the full event is available on the Nour Foundation website.

This event is part of the Rethinking Mortality series.

Recent breakthroughs in emergency medicine have enabled modern science to halt and even reverse death. At the same time, these advances have inadvertently led science into a domain that has traditionally been relegated to theology and philosophy. The so-called “grey areas” between the time of death and the time of resuscitation—ranging from several minutes up to several hours—have raised intriguing questions about brain activity and consciousness during this period that have compelled us to re-examine our conception of death. What does the patient feel and experience during the resuscitation process? Are we dealing with the person as a whole, or with just the physical body? Emergency medicine experts Lance Becker and Sam Parnia and neurosurgeon Stephan Mayer discuss key discoveries and emerging technologies in resuscitation science that are helping to bring back those on the brink of death, and the difficult questions and ethical dilemmas they sometimes confront during medical crises.

Professor of Emergency Medicine and Director of the Center for Resuscitation Science, The University of Pennsylvania

This event is part of The Rethinking Mortality Series

Moderated by Steve Paulson, Executive Producer of Wisconsin Public Radio's To the Best of Our Knowledge, this four-part lecture series brings together leading experts from various fields to discuss how the latest research is challenging our understanding of the very nature of mortality.

Dr Mayer is considered a world leader in the field of neurological intensive care. He is active in research related to brain hemorrhage, therapeutic hypothermia, status epilepticus, and multimodality brain monitoring. Dr. Mayer is past president of the Neurocritical Care Society, and was principal investigator of the international FAST trial of hemostatic therapy for intracerebral hemorrhage. He is a co-author of several textbooks, including Therapeutic Hypothermia and Neurological and Neurosurgical Intensive Care, which is considered the standard text in the field. His efforts to improve care of patients with out-of-hospital cardiac arrest were recently featured in the book Cheating Death by Dr Sanjay Gupta, medical correspondent for CNN.

Professor of Emergency Medicine and Director, Center for Resuscitation Science

Lance Becker, MD, has research interests that are translational and extend across the basic science laboratory into animal models of resuscitation and to human therapies. He has a particular interest in the role of mitochondria in "life-versus-death decision making" for cells and tissues exposed to and recovering from ischemia. He founded and directs the Center for Resuscitation Science which bring investigators from diverse fields together for resuscitation research and improved training of young scientists. His cellular studies have helped define reperfusion injury mechanisms, mitochondrial oxidant generation, reactive oxygen and nitrogen species responses to ischemia, apoptotic activation following ischemia, signaling pathways, new cellular cytoprotective strategies and hypothermia protection. Additional studies are ongoing on development of novel human coolants for rapid induction of hypothermia, inflammatory pathways activated following shock and cardiac arrest, improving the quality of CPR, new defibrillator and cardiopulmonary bypass technologies, epidemiology of sudden death, and novel treatments for cardiac arrest.

Dr. Sam Parnia is an Assistant Professor of Medicine at the State University of New York at Stony Brook. He received his medical degree from the Guys and St Thomas’ Hospitals (UMDS) of the University of London in 1995 and his PhD in cell biology from the University of Southampton in the UK in 2006. Dr. Parnia has trained extensively both in the UK and the USA where he completed his medical residency at the Universities of Southampton, UK and Weill Cornell Medical Center in New York, USA. He completed his fellowship training in Pulmonary and Critical Care Medicine at the University of London and the Weill Cornell Medical Center in New York, USA in 2010. He joined the faculty at Stony Brook Medical Center as a member of the Pulmonary, Critical Care and Sleep Division, of the Department of Medicine in 2010. Dr Parnia’s clinical and research areas of expertise are in cardiac arrest resuscitation, brain resuscitation and the cognitive sequelae of surviving cardiac arrest including near death experiences. He is director of Resuscitation Research at the State University of New York in Stony Brook, USA and an honorary fellow at Southampton University Hospital, UK. Dr Parnia currently directs a number of international studies focusing on the quality of brain resuscitation as well as the cognitive and mental processes that occur during cardiac arrest including near death experiences. As well as publishing in leading scientific and medical peer reviewed journals he is also the author of two popular science books, Erasing Death (2013) and What Happens When We Die? (2006). His work has featured in many newspapers and magazines all over the world including the Guardian, Telegraph, GQ, Psychology Today, Time, Newsweek, as well as on the BBC and CNN. He also contributes regularly to TV and radio discussions and continues to divide his time between hospitals in the UK and US.

Executive Producer, Wisconsin Public Radio's nationally-syndicated program To the Best of Our Knowledge.

Steve Paulson is the executive producer and an interviewer with To the Best of Our Knowledge, the Peabody Award-winning radio program produced at Wisconsin Public Radio and syndicated nationally by Public Radio International. Paulson has written for Salon, Slate, Huffington Post, The Chronicle of Higher Education, The Independent and other publications. His radio reports have also been broadcast on NPR's Morning Edition and All Things Considered. His recent book, "Atoms and Eden: Conversations on Religion and Science," was published by Oxford University Press.