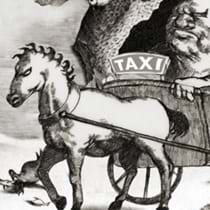 Sloth: Is Your City Making You Fat?

Obesity in the US is a big problem. While myriad factors account for our nation's increasing waistlines—from poor nutrition to genetics—could our environment be equally to blame? A lack of walkable streets at home and an unparalleled reliance on car commutes may be keeping us overweight.

Join a panel of scientists, urban planners, and fitness experts for a talk on how designing and building better cities and towns may make us a healthier—and leaner—nation.

Tom Vanderbilt is author of Traffic: Why We Drive the Way We Do, now available in paperback. He is contributing editor to Artforum, Print, and I.D.; contributing writer to Design Observer; and has written for many publications, including Wired, the Wilson Quarterly, the New York Times Magazine, and the London Review of Books. He blogs at howwedrive.com and lives in Brooklyn, N.Y. He tweets @tomvanderbilt

Bridging the worlds of academia and practice, Dr. Alfonzo is the Founder of State of Place, a place rating and walkability diagnostic tool tied to economic value, the president of Urban Imprint, an urban design-behavior research and consulting firm, and a Research Fellow and Adjunct Professor at NYU-Poly where she's focusing on the links between the built environment and obesity in rapidly urbanizing Chinese cities. For over a decade, Dr. Alfonzo has been examining the relationship between the built environment and behavior, focusing on walkability and sustainability within the context of neighborhood revitalization.Her research and consulting work has included walkability evaluations, extensive work on walkability metrics, suburban retrofitting, and the triple bottom line of urban design, all with the goal of producing evidence-based design and policies. She has a Ph.D. in Urban and Regional Planning with an emphasis on Urban Design and Behavior, as well as a Masters in Urban Planning, from the University of California, Irvine, and a Bachelor of Arts in Architecture and Psychology from the University of Miami. She tweets at @stateofplaceorg

Kaid co-founded LEED for Neighborhood Development, a national process for defining and certifying smart, green land development under the auspices of the U.S. Green Building Council. He is also a founder and board member of Smart Growth America, a nationwide coalition working on revitalizing cities, building better neighborhoods, and stopping the spread of suburban sprawl.

Kaid is a prolific writer whose portfolio spans several books including Once There Were Greenfields, Smart Growth in a Changing World, and Solving Sprawl. He also writes articles several times each week for The Atlantic Cities, Huffington Post, Sustainable Cities, Better Cities and Towns, and NRDC websites. His forthcoming book is People Habitat: 20 Ideas that Change the Way We Think About Cities.

Hunter Reed is co-founder of FASTNYC. Founding FASTNYC enabled Hunter to combine the things he is most passionate about — sports, nutrition, and working with kids — into his lifelong mission of bettering the lives of disadvantaged youth by giving them the tools to lead a healthy, happy and successful life. Hunter served as President of the President's Council for District 4 in East Harlem in 2009 and was also a member of the District's Leadership Team. The severe lack of organized sports and physical activity available to NYC's public school children was something Hunter became acutely aware of when his own son was a student in the NYC public school system. Realizing the lack of sports and physical fitness resources available to these children, and witnessing how many of them battle obesity and Type 2 Diabetes, Hunter was determined to find a solution. From this, the concept of FASTNYC was born.