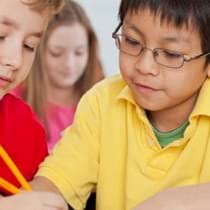 Social and Emotional Learning: Preparing Our Children to Excel

Presented by the Science Education Initiative and Scientific American Mind

School has traditionally been about teaching kids new knowledge and skills. Most people have long believed that each child's temperament and capacity for learning are more or less inborn, or at least, not the province of teachers. But the recent trend in education to foster social and emotional learning in classrooms is aimed at nurturing such fundamental traits as self-control, focus, perseverance and serenity in children. These essential capacities are now known to underlie both academic and life-long success.

The program, presented by the Academy and Scientific American Mind, features Amishi Jha, a psychologist at the University of Miami, who will explain how to foster emotional balance and strengthen executive skills such as attention through the practice of mindfulness—that is, being in the moment, aware of events as they are unfolding. Psychologist Clancy Blair of New York University will reveal, through startling new findings, the dangers of stress to a child's ability to learn—a problem that is particularly acute for children in poverty—and the importance of creating calm in the classroom for improving kids' brain function.

Scientific American Mind Editor Ingrid Wickelgren will introduce the topic and moderate the discussion. Don't miss the opportunity to discover the science and strategy behind curricula that craft young minds that are smart, socially astute, and able to coolly confront life's challenges.

Amishi P. Jha, PhD is an Associate Professor in the Department of Psychology at the University of Miami. She received her PhD from University of California-Davis in 1998, received her post-doctoral training in the Brain Imaging and Analysis Center at Duke University (Durham, NC, USA) in functional neuroimaging, and was an Assistant Professor at the Center for Cognitive Neuroscience at the University of Pennsylvania, before joining the University of Miami in 2010 to spearhead the development of their Neuroimaging Center. Her research program involves the use of functional MRI, electroencephalography (EEG), and neurobehavioral measures to investigate the basic mechanisms of attention and working memory. Over the last several years, her work has expanded to investigating if and how attention and working memory are altered with mental training techniques involving mindfulness-based practices in a variety of populations (including predeployment military service members, medical and nursing students, teachers, patients with ADHD, and children). Her work is supported by the Dept of Army, Medical Research and Material Command, NIH-NCCAM, and private foundation grants. Learn more about her work at amishi.com.

Clancy Blair, a Professor of Applied Psychology at New York University, is a developmental psychologist who studies self-regulation in young children. His primary interest concerns the development of cognitive abilities referred to as executive functions and the ways in which these aspects of cognition are important for school readiness and early school achievement. He is also interested in the development and evaluation of preschool and elementary school curricula designed to promote executive functions as a means of preventing school failure. In 2002, Blair and his colleagues at Penn State University and at the University of North Carolina at Chapel Hill received funding from the National Institute of Child Health and Human Development for a longitudinal, population-based study of family ecology and child development beginning at birth. In his part of the project, Blair is examining interaction between early experiential and biological influences on the development of executive functions and related aspects of self-regulation. Ultimately, Blair and his colleagues plan to follow this sample through the school years and into young adulthood. Prior to coming to NYU, Blair spent ten years as an assistant and then associate professor in the department of Human Development and Family Studies at Penn State. He received his doctorate in developmental psychology and a master's degree in public health from the University of Alabama at Birmingham in 1996.

Ingrid Wickelgren is an editor at Scientific American Mind, but this is her personal blog at which, at random intervals, she shares the latest reports, hearsay and speculation on the mind, brain and behavior. Follow her on Twitter @iwickelgren.