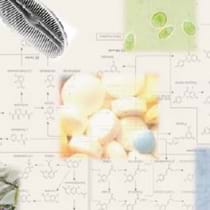 All metabolites occur as a result of activity within biological systems. Primary metabolites are the intermediate nodes in the metabolic pathways leading to the synthesis of high molecular weight biomolecules. Where primary metabolism is a required component of life, it is not enough to sustain life in the continually changing conditions of the biosphere. Therefore, a second set of highly diverse biochemical materials arises, known as secondary metabolites or idiolites, which are utilized by organisms to interact with their environment. Living systems have deployed communication networks by means of synthesizing and releasing idiolites in response to other organisms, including humans, and there is still much to learn about the wide range of biochemical diversity in metabolites, or the 'metabonosphere'. This symposium takes a systems biology approach to explore secondary metabolites and their networks, to infer their biological effects and potential benefits for human health.

Manuel Duval is a bioinformatics scientist doing computational biology research for Drug Discovery and Development. His interest is in characterizing the mode of action of candidate therapeutics agents to cellular systems and to identify the source of inter-individual variability in drug response. Graduated from the Université Joseph Fourier, Grenoble France, Manuel is working in the Drug R&D industry since 2001 following genomics and bioinformatics research at Texas A&M University in the fields of agro-genomics.

Thomas B. Freeman is currently a scientist in the Computational Biology section of the Scientific Knowledge Discovery Department at Boehringer-ingelheim. As such, he have been providing computational analysis in support of exploratory drug discovery programs and particularly focused on the biology of human disease for the Immunology & Inflammation and Cardio-Metabolic therapeutic areas, recently focusing on chronic kidney disease. He began his scientific career by earning a BS in Biology at Franklin & Marshall College in Pennsylvania in 1984. He continued his studies at the Biology Department at Virginia Tech studying peripheral thyroid hormone metabolism in development, earning an MS. He broadened his experience by working in Molecular Virology (bovine parvovirus replication) and Plant Molecular Biology (ubiquitin-dependent proteolysis and apoptosis) labs also at Virginia Tech. In 1998 Dr Freeman moved to industry working to engineering insect resistance traits in corn. In 1999, he moved into pharma investing several years in the clinical biomarker group at Pfizer in Groton, Connecticut. He developed biomarkers and assays to support phase I and phase II clinical trials for CNS and Cardiovascular development programs. In 2006, he helped establish a regulated bioanalysis group in support of preclinical biotherapeutics programs at Pfizer. Finally in 2008 he moved into the Computational Biology group at Pfizer supporting exploratory and advanced cardiovascular medicine programs. In recent years he has had the opportunity to participate in the Sage Bionetwork Congresses and have Genetic Alliance meetings. He is working to exploit the technical and conceptual advances to begin to understand the complexity of human physiology and pathohysiology and apply this to drug discovery and development.

Sean F. Brady graduated with a degree in molecular biology in 1993 from Pomona College in Claremont, California. He received his Ph.D. in organic chemistry from Cornell University in 2001. In 2002, he moved to Harvard Medical School as a fellow in the Institute of Chemistry and Cell Biology. He was named an instructor in the department of biological chemistry and molecular pharmacology at Harvard Medical School in 2004. In 2006 he moved to The Rockefeller University as an assistant professor. In 2009 Sean became a Howard Hughes Medical Institute Early Career Scientist. Sean’s research interests center on both the discovery and functional characterization of new genetically encoded small molecules. One area of particular interest is the development of methods to access new biologically active small molecules from uncultured bacteria.

Steven Edgar obtained a BS in Chemical and Bimolecular Engineering from the Georgia Institute of Technology in 2011, having performed undergraduate research in the labs of Dr. Victor Breedveld and Dr. Mark Prausnitz. He also completed extended internships at Johnson & Johnson, Eli Lilly, and ExxonMobil totaling over two years of work. Currently, Steven is a doctoral candidate in the school of Chemical Engineering at the Massachusetts Institute of Technology in Dr. Gregory Stephanopoulos' research group. His current doctoral work focuses on the production of isoprenoids in heterologous hosts, with an emphasis on the anti-cancer pharmaceutical paclitaxel, and its early-pathway precursors.

Dr. Justin R. Nodwell is Professor and Chair in the Department of Biochemistry in the University of Toronto. He received his PhD at the University of Toronto where he investigated gene regulation in bacteriophage lambda and E. coli with Dr. Jack Greenblatt. As a postdoctoral fellow at Harvard University, he worked with Dr. Richard Losick and initiated his research on the streptomycetes bacteria. During this time he investigated a mechanism of cell-cell signaling involved in sporulation. His independent career began at McMaster University in 1998 as a Medical Research Council Scholar in the Department of Biochemistry and Biomedical Sciences. During his time at McMaster he continued his work on spore formation, culminating with the elucidation of the mechanism of biosynthesis of the SapB morphogenetic peptide (Kodani et al., 2004. PNAS 101: 11448-53; Willey et al., 2006. Mol. Microbiol. 59: 731-42). His lab then moved on to the investigation of secondary metabolism with a view to identifying novel drug leads. This resulted in the first use of genetic perturbation of the general regulatory network for secondary metabolism for driving the expression of cryptic secondary metabolites (McKenzie et al., 2010. J. Antibiotics 63, 177-182) and later, the first use of chemical perturbation to the same end (Craney et al., 2012. Chemistry and Biology 18: 1020-7). He was a founding member of the Antimicrobial Research Centre and, later, of the Michael DeGroote Institute for Infectious Diseases Research.

In 2013 he returned to U of T as departmental Chair. His research remains focused on the streptomycetes and on the use of genetic and chemical tools to drive the identification and characterization of new metabolites having potential as therapeutic agents.

Kang Zhou obtained his PhD degree from Singapore–MIT Alliance in 2012 and then worked as a Postdoctoral Associate in Department of Chemical Engineering at MIT. He has worked on overproduction of valuable isoprenoid pharmaceuticals in genetically engineered microbes since 2007.

The International Society of Systems Biology

Watch Where You Step, There is New Chemistry Everywhere
Sean F. Brady, PhD, The Rockefeller University

One of the key revelations to arise from the large-scale sequencing of bacterial genomic DNA is that traditional approaches used for the discovery of natural products only provide functional access to a small fraction of the natural product biosynthetic gene clusters present in nature. The sequencing of DNA extracted directly from soil samples indicates that as yet uncultured soil microbes outnumber their cultured counterparts by at least two to three orders of magnitude. This uncultured majority no doubt produces secondary metabolites that could serve as molecular probes of biological processes and therapeutic agents. Uncultivated microorganisms are a very attractive source of potentially new natural products, but they are not amenable to the traditional approaches used to characterize natural products from microbes grown in pure culture. Although there appears to be no easy way to culture this collection of unstudied microorganisms, it is possible to isolate large fragments of microbial DNA directly from environmental samples and clone this DNA into model bacterial systems in the lab. We are using both functional and sequence-based screening strategies to access new natural product and new biosynthetic enzymes from large environmental DNA libraries.

Isoprenoids are a large family of secondary metabolites, including more than 55,000 examples. The DXP pathway produces building blocks for all isoprenoids in Bacteria. We successfully optimized the DXP pathway for overproduction of isoprenoid scaffold molecules in Bacteria by using an integrated approach that was designed based on multidimensional data, including mRNA data, protein data and metabolite data. After achieving high titer production of the scaffold molecules, the next challenge was how to functionalize them into active compounds. As an example, we studied a key enzyme in early paclitaxel biosynthetic pathway, taxadiene 5α-hydroxylase. By using protein engineering, we successfully improved its product selectivity and overproduced a dioxygenated taxane in E. coli.

The soil bacteria of the genus Streptomyces have provided us with a remarkable diversity of biologically active small molecules. This includes >70% of the antibiotics in clinical use as well as antifungal, anticancer, immune modulatory and other drugs. They produce these natural products through biochemical pathways known as their 'secondary' metabolism. Most were discovered through screens against bacteria conducted between 1950 and 1975. There are conflicting views on the diversity of natural products that remain to be discovered however it is clear that the streptomycetes genomes encode many more molecules than was previously appreciated. It is unclear whether the genes encoding the 'cryptic' natural products found in the growing number of sequenced genomes are simply not expressed in the laboratory or whether they have biological activities that provide no read out in the assays that have been used to date. My group is using chemical and genetic perturbation to activate secondary metabolic genes so that we can identify their products—we are identifying their biochemical targets using a variety of model organisms and genome-scale strategies. At present the diversity and number of unknown and structurally novel natural products is unclear however it is certain that there are many compounds with novel targets and likely that there are novel scaffolds to be discovered as well.