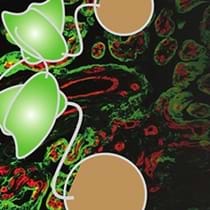 Cytokines are small, short-lived proteins produced by a broad range of cells that play an important role in health and disease, specifically in host responses to infection, inflammation, trauma, sepsis, cancer, and reproduction. Preclinical studies have shown that many cytokines have considerable clinical potential as antiviral and anticancer agents or to suppress inflammatory and autoimmune conditions. However, in the clinic substantial systemic toxicity associated with cytokine dosing regimens prevents escalation to therapeutically active regimens. One strategy to circumvent this toxicity problem is the development of immunocytokines: cytokines fused to a binding module such as a scFv-antibody fragment or a nanobody to target them to selected cells and/or sites of disease. Targeted delivery of immune-stimulatory or immune-regulatory cytokines represents a promising strategy for the treatment of cancer and chronic inflammatory diseases, respectively, by improving the therapeutic index with acceptable side effects. As of 2012 there were over 40 immunocytokines tested in animal models which assessed biodistribution properties and/or therapeutic performance; nine of these entered clinical development. Although the use of antibodies as the delivery vehicle has improved the therapeutic index of cytokines, additional efforts are still being explored. One such effort; "activity-by-targeting", utilizes mutated cytokines that alter receptor binding properties combined with selective targeting to cells or tissues.

James W. Mier, MD is an Associate Professor of Medicine at the Beth Israel Deaconess Medical Center, one of the teaching hospitals of Harvard Medical Center and one of the institutions comprising the Dana Farber Harvard Cancer Center. He received his oncology training at the National Cancer Institute and his research training in the Laboratory of Tumor Cell Biology under the direction of Dr. Robert Gallo. While at the NCI, he was involved in the isolation and characterization T-cell growth factor (IL-2). He subsequently was involved in the clinical testing of IL-2 that led to its FDA approval for patients with renal cell carcinoma (RCC) or melanoma. His early laboratory work was focused on the mechanisms underlying the fever, hypotension and other side effects induced by IL-2 treatment and he was the first to demonstrate that IL-2 is a potent inducer of other cytokines such as IL-1 and TNF. These inducible pyrogenic cytokines were shown to mediate the fever, hepatic acute phase response, neutrophil chemotactic defect, and other effects induced by IL-2 treatment. With the advent of targeted therapies for RCC, he has shifted his laboratory focus to explore the mechanisms by which RCC escape from VEGF-targeted drugs.

Dr Brentjens obtained an MD/PhD (microbiology) from SUNY Buffalo, completed residency in medicine at Yale New Haven Hospital, and a medical oncology fellowship at Memorial Sloan Kettering Cancer Center (MSKCC). Currently, Dr Brentjens is an associate member on the faculty at MSKCC and an attending physician on the leukemia service. As a medical oncology fellow during his training at MSKCC, Dr Brentjens initiated the initial pre-clinical studies demonstrating the potential clinical application of autologous T cells genetically modified to target the CD19 antigen through the retroviral gene transfer of artificial T cell receptors termed chimeric antigen receptors (CARs). Following completion of his medical oncology training, Dr Brentjens became the principle investigator of his own laboratory. As a PI, Dr Brentjens successfully translated these studies to the clinical setting treating patients with relapsed CD19+ tumors including chronic lymphocytic leukemia (CLL) and B cell acute lymphoblastic leukemia (B-ALL). Ongoing pre-clinical research in the laboratory is focused on the further development of CAR modified T cells designed to overcome the hostile immunosuppressive tumor microenvironment through the generation of “armored CAR T cells” currently being translated to the clinical setting as second generation CAR modified T cell clinical trials. Additionally, work in the Brentjens' lab has expanded this CAR technology to target additional tumor antigens expressed on other tumors including targeting the MUC-16 antigen expressed on ovarian carcinomas as well as the more ubiquitous WT-1 tumor associated antigen. These latter projects are similarly in the process of translation to the clinical setting.

Dr. Gillies is an expert in the creation and development of recombinant antibodies and immunotherapies. Prior to founding Provenance Biopharmaceuticals Corp, Dr. Gillies led all scientific and business endeavors of Lexigen Pharmaceuticals Corp After Lexigen’s acquisition in 1999 by Merck KGaA, Dr Gillies had the additional responsibility of overseeing Global Oncology Pre-clinical research. Previously, he was Vice President of research at Damon Biotech and Abbott Biotech Inc., where he oversaw development of recombinant antibodies and pro-urokinase, an anti-clotting protein. As a postdoctoral fellow at the Massachusetts Institute of Technology, he identified the first cellular enhancer sequences that were found to be critical for the regulation of antibody expression. This discovery proved a key part of the commercial success of Erbitux, a cancer drug marketed by Imclone Systems Inc., Bristol Myers Squibb, and Merck KGaA. As part of his recombinant antibody project work, Dr. Gillies invented and implemented the immunocytokine technology, and leveraged through his academic network, the first proof of principle of this approach.  Dr. Gillies received his MS degree and PhD in Microbiology from the College of Medicine and Dentistry, Rutgers University and his BS degree in Microbiology from the University of Massachusetts, Amherst.

Dr. Ritz is currently Professor of Medicine at the Dana-Farber Cancer Institute, Brigham and Women’s Hospital and Harvard Medical School. He is Executive Director of the Connell-O'Reilly Cell Manipulation Core Facility (CMCF). The CMCF is a GMP processing facility that provides manufactured cellular products of various types for patients enrolled on clinical trials evaluating novel cellular therapies for cancer and other diseases. These include cellular cancer vaccines, immune cells for adoptive cell therapy and genetically modified cells. Dr. Ritz has been a successful laboratory and translational scientist for over 35 years. His major interests have been in cancer immunology and hematopoietic stem cell transplantation. Recent studies in his laboratory have focused on immune reconstitution in patients undergoing hematopoietic stem cell transplantation.  In this setting, donor immune cells play a critical role in the recognition and elimination of residual leukemia cells (graft versus leukemia – GVL) but immunologic targeting of normal recipient cells also leads to GVHD and damage to normal tissues. Studies of immune reconstitution have demonstrated that donor B cells and regulatory T cells play important roles in the development of GVL and GVHD. These observations have led to the development of new strategies to selectively modulate immune reconstitution to improve patient outcomes after transplant.

Mr. Tighe is currently the Associate Director of ImmunoPharmacology in the Immuno-Oncology Translational Innovation Platform at EMD Serono, where has been an employee for over 10 years. His research team has characterized the in vivo efficacy and immune mechanism for a wide variety of immunomodulatory cancer therapies including immunocytokines, cancer vaccines, checkpoint inhibitor antibodies, and novel fusion proteins. He has made major contributions to several successful IND filings within the EMD Serono immuno-oncology pipeline, including the NHS-IL12 immunocytokine and the anti-PD-L1 antibody, avelumab.  Prior to transitioning into industry, Mr. Tighe conducted academic research on the MIT campus for over six years where he worked in the laboratories of world leading researchers including Bob Weinberg.

Gilles Uzé was trained in the Laboratory of Ion Gresser (Villejuif, France) and received his PhD in 1986 from the University of Paris VII. After having cloned the interferon receptor, he moved in 1993 to Montpellier (France) where he is currently Research Director at the Centre National de la Recherche Scientifique (CNRS). He has a long-term experience in the study of structure-function relationship of IFN and receptor components and he has contributed to the understanding of the biological significance of the multiple type I IFN subtypes.