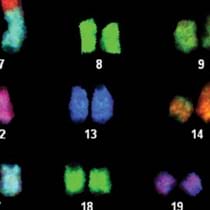 Presented by the Genome Integrity Discussion Group at the New York Academy of Sciences.

Genome Integrity Discussion Group meetings are organized under the leadership of Scott Keeney (Memorial Sloan Kettering Cancer Center), Susan Smith (NYU Langone Medical Center) and Lorraine Symington (Columbia University). This meeting will include a scientific symposium from 1:30 to 4:30 PM, followed by a networking reception from 4:30 to 5:30 PM.

Call for Student/Postdoc Presentation Abstracts: Deadline January 23rd
Two spaces are available for students and/or postdocs to present at our next meeting. Abstracts should be in CSHL format with file name: NYAS.name.doc and submitted via email to Dr Scott Keeney at s-keeney@ski.mskcc.org by January 23rd.

Prasad Jallepalli is Member and Professor in the Molecular Biology Program at Sloan Kettering. Prior to arriving in New York, Prasad earned his A.B. degree at Harvard and his M.D. and Ph.D. degrees from Johns Hopkins. During his postdoctoral research with Bert Vogelstein, Prasad developed methods for precisely “knocking out” or otherwise modifying endogenous loci in human somatic cells. By combining these genome-editing techniques with high-resolution cell imaging, chemical genetics, and phosphoproteomics, Prasad’s lab has made significant advances in our understanding of chromosome segregation and cell division, defects in which give rise to aneuploidy, birth defects, and cancer. Current areas of interest include (1) how mitotic kinases regulate chromosome-spindle attachments; (2) how sister chromatid cohesion is established during S phase and coupled to DNA replication; and (3) how kinetochores and nuclear pore complexes transduce signals via the spindle assembly checkpoint (SAC) to control the speed and fidelity of mitosis.

Dr. Petrini is the Paul A Marks Chair of Molecular Cell Biology and member of the Molecular Biology Program at SKI. He is also Professor of Medicine at WCMC. The work in Dr. Petrini's lab is focused on the DNA damage response, a network of functions comprising DNA damage signaling, DNA repair, and DNA damage dependent cell cycle regulation. His laboratory employs yeast and mice to undertake genetic, molecular biological, and biochemical analyses of the pathways in eukaryotic cells that are responsive to chromosome breaks. His laboratory has elucidated the genetic bases of several chromosome instability and cancer predisposition syndromes in humans, and have used model systems based on those diseases to understand the mechanisms that underlie the basic biological processes that are impaired in affected individuals.

Iestyn Whitehouse received his PhD from the University of Dundee in Scotland where he studied biochemical properties of ATP dependent chromatin remodeling enzymes. He then studied as a postdoc with Toshio Tsukiyama (FHCRC in Seattle) to characterize genome wide chromatin structure. He joined MSKCC in 2008 and continue to study chromatin and its relationships between gene transcription and DNA replication.