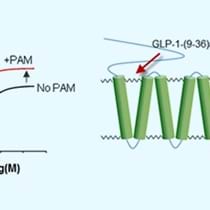 GPCRs are key targets for drug development. Positive allosteric modulators (PAMs) of GPCRs potentiate the activity of endogenous GPCR ligands at a topographically distinct site from the orthosteric ligand binding site. The therapeutic benefits of PAMs include increased functional selectivity, reduced side-effects, and fine-tuned pharmacological responses. In this symposium, academic and industry scientists will describe the identification, characterization, and development of PAMs for challenging GPCRs.

Please note: Transmission of presentations via the webinar is subject to individual consent by the speakers. Therefore, we cannot guarantee that every speaker's presentation will be broadcast in full via the webinar. To access all speakers' presentations in full, we invite you to attend the live event in New York City when possible.

Mercedes Beyna is a scientist in the Neuroscience Research Unit at Pfizer. Her research focuses on target identification and assay development in the areas of psychiatric as well as neurodegenerative disorders. Captivated by neuroscience, she has worked in the field for over 10 years, in both academic and industrial laboratory settings. Before joining pharmaceutical R&D, Mercedes held lab manager and senior lab technician positions at New York University (NYU). Mercedes attended Binghamton University, earning her undergraduate degree in Biology, and subsequently received her Master's Degree in Biology from NYU. As the Pfizer lead in the Biochemical Pharmacology Discussion Group at the New York Academy of Sciences, she enjoys developing interesting and educational symposia.

Phil Carpino received his Ph.D in Organic Chemistry from Harvard University in 1990, working in the laboratory of Nobel Laureate Prof E. J. Corey. He then joined the Medicinal Chemistry department of Pfizer Central Research in Groton, CT and in 2011, relocated to Cambridge, MA to provide medicinal chemistry & chemical biology support to Pfizer's Cardiovascular & Metabolic Diseases Research Unit. Phil has worked on the discovery and development of many small molecule GPCR agonists, antagonists, and allosteric modulators for the treatment of metabolic diseases, primarily diabetes and obesity. He is a co-inventor of capromorelin, a ghrelin receptor agonist that reached Phase II clinical trials. Recently, his group uncovered the mechanism-of-action of a new class of irreversible GPCR positive allosteric modulators (PAMs) that potentiate probe activity at GLP-1R.

Esther Lee received a Ph.D. in Organic Chemistry from the University of Pennsylvania in 2008 under the guidance of Professor Jeffery D. Winkler and completed post-doctoral training in the laboratory of Professor David W. C. MacMillan at Princeton University. In 2010, Esther joined Pfizer working in the Medicinal Chemistry Department of the Cardiovascular Metabolic Diseases (CVMED) unit in Groton, CT synthesizing key analogues for class B GPCR targets, most recently the glucagon receptor. In 2012, she relocated to Cambridge, MA where she is providing medicinal chemistry support on GPCR agonist, antagonist, and allosteric modulator targets to the CVMED research unit.

Dr. Conn is the Lee E. Limbird Professor of Pharmacology at Vanderbilt University and Director of the Vanderbilt Center for Neuroscience Drug Discovery.  He received the Ph.D. degree from Vanderbilt in 1986 and pursued postdoctoral studies at Yale University before joining the faculty at Emory University in 1988.   Dr. Conn served as head of the Department of Neuroscience at Merck and Company (West Point, PA) from 2000 – 2003 then moved to Vanderbilt University as the founding director of the Canter for Neuroscience Drug Discovery, where he has advanced multiple drug candidates into development for treatment of brain disorders.  Dr. Conn served as Editor in Chief of Molecular Pharmacology, on editorial boards of multiple other journals, and Scientific Advisory Boards of multiple foundations and companies.  He has received numerous awards for his translational research.  Dr. Conn’s research is focused on development of novel therapies for schizophrenia, depression, and other brain disorders.

Ron Dror is an Associate Professor of Computer Science and, by courtesy, Molecular and Cellular Physiology at Stanford University.  Dr. Dror employs a broad range of computational methods to study the spatial organization and dynamics of biomolecules and cells.  Before joining Stanford, Dr. Dror served as second-in-command of D. E. Shaw Research, a hundred-person company, where he focused on high-performance computing and biomolecular simulation (part of a project highlighted by Science as one of the top 10 scientific breakthroughs of 2010).  Dr. Dror earned a PhD in Electrical Engineering and Computer Science at MIT and an MPhil in Biological Sciences as a Churchill Scholar at the University of Cambridge.

Christopher Fotsch is a Director of Research in the Department of Therapeutic Discovery at Amgen, Inc. He received his Ph.D. in Organic Chemistry from the University of California, Irvine under the direction of Professor A. Richard Chamberlin, and he was a NIH Postdoctoral Fellow in the laboratory of Professor Chi-Huey Wong at The Scripps Research Institute in La Jolla, California. At Amgen, he has led medicinal chemistry programs in the fields of oncology, neurosciences, and metabolic disorders. His research interests include the discovery of novel therapies for grievous illnesses, structure-based drug design, and enzyme-catalyzed organic synthesis.

In 2008, Professor Corey Hopkins joined the faculty in the Department of Pharmacology at the Vanderbilt University Medical Center, Nashville, TN, USA, where he is also the Associate Director of Medicinal Chemistry for Vanderbilt’s Center for Neuroscience Drug Discovery.  Dr. Hopkins lead’s a team of chemists focusing on mGlu4 allosteric modulation for the treatment of Parkinson’s disease.  Prior to joining Vanderbilt, Dr. Hopkins was a member of the medicinal chemistry department of Sanofi-Aventis Pharmaceuticals (2001 – 2005; 2006 – 2008) and P&G Pharmaceuticals where he worked on a number of CNS-related therapeutic targets (multiple sclerosis, depression) and inflammation-related targets (asthma, rheumatoid arthritis).  He received his Ph.D. in Organic Chemistry in 2002 from the University of Pittsburgh, USA, under the direction of Professor Peter Wipf. Dr. Hopkins is the author of over 60 peer-reviewed manuscripts, review articles and book chapters.  In addition, he is the co-inventor on over 20 patents.

Whitney Nolte completed her B.S. in Chemistry at Rice University in 2006.  She received her Ph.D. from Harvard’s Department of Chemistry and Chemical Biology, working for Alan Saghatelian.  Her thesis focused on developing mass spectrometry-based methods to study peptide metabolism.  Specifically, she discovered novel substrates of prolyl endopeptidase and dipeptidyl peptidase 4.  She also identified the enzyme responsible for the degradation of calcitonin gene-related peptide in the spinal cord and plasma.  After her Ph.D., she worked for Ramnik Xavier at the Broad Institute where she characterized Type I Diabetes and Crohn’s Disease susceptibility genes using high-throughput screening and proteomics methods.  Whitney joined Pfizer in 2012.

Using atomic-level simulations, we determined the binding sites and binding modes of multiple allosteric modulators of a muscarinic GPCR. Simulations also revealed mechanisms that contribute to positive and negative allosteric modulation of classical ligand binding. These findings, which we validated experimentally, provide an initial structural basis for the rational design of allosteric GPCR modulators.

The calcium-sensing receptor (CaSR) is a G protein-coupled receptor (GPCR) that is modulated by serum calcium. In the chief cells of the parathyroid where CaSR is predominantly expressed, elevated levels of serum calcium activate CaSR to initiate an intracellular signaling cascade that reduces the secretion of parathyroid hormone (PTH). Positive allosteric modulators of CaSR enhance the effects of serum calcium, further lowering PTH secretion. In fact, Amgen's positive allosteric modulator of the CaSR (cinacalcet HCl) has benefited patients who suffer from primary and secondary hyperparathyroidism (HPT), a disease characterized by abnormally high levels of PTH. In this presentation a summary of the research that led to the discovery of cinacalcet and back-up compounds will be discussed. In addition, the assay methods used to identify positive allosteric modulators for CaSR will be presented.

Disorders of the central nervous system remain some of the most elusive targets for the pharmaceutical industry and academic researchers to tackle. Although, Parkinson's disease (PD) is the second most common neurodegenerative disease, no effective long term treatment or cure has been developed. Utilizing a functional high-throughput screening and medicinal chemistry approach, we have discovered a novel series of positive allosteric modulators of the metabotropic glutamate receptor 4 (mGlu4). Advanced lead compounds show excellent brain exposure and are active in a number of preclinical animal models of Parkinson's disease.

The glucagon-like peptide-1 receptor (GLP-1R) is an important target for the treatment of type 2 diabetes. GLP-1 binds the GLP-1R and promotes glucose-dependent insulin secretion. Recent studies have identified several small molecule potentiators of the GLP-1R. The focus of these studies is to investigate the mechanism of action of one of the most studied GLP-1R potentiators, 4-(3-benzyloxyphenyl)-2-ethylsulfinyl-6-(trifluoromethyl)pyrimidine (BETP), which potentiates the signaling of weak agonists at the receptor. BETP is a reactive electrophile, making covalent modification of the receptor a potential mechanism for its action. The potentiation of weak agonists by BETP is resistant to washout, providing evidence that it acts by covalently modifying the GLP-1R. Clickable analogs of BETP modify active, membrane-bound GLP-1R in living cells. Studies using mass spectrometry-based proteomics identified Cys347 and Cys438 as sites at which BETP modifies the GLP-1R. The functional relevance of the modification at Cys347 and not Cys438 was established through site-directed mutagenesis. Full agonists retained activity at the Cys347Ala mutant of GLP-1R; however, BETP no longer potentiated the function of the weak agonist, GLP-1(9-36)NH2. These results illustrate that BETP covalently modifies Cys347 in intracellular loop 3 (ICL3) of GLP-1R and that this modification is necessary for its potentiation of GLP-1R activity. We further show that introduction of a cysteine residue in ICL3 of the glucagon receptor sensitizes it to ligand potentiation by BETP. These results highlight the potential relevance of this site in ICL3 to enhancing the activity of class B GPCRs and may facilitate the discovery of new small molecule modulators.