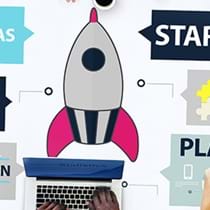 The Business of STEM: Startups, Technologies, Entrepreneurship and Management

This evening event aims to help researchers in STEM fields understand the basis of establishing and financing a company. The first panel will provide advice and recommendations about taking an idea from the lab to fruition, while the second panel will cover topics on financing strategies for new startups, what VCs are looking for, and how to pitch your idea to investors. Audience members will also have the opportunity to interact with the panelists and invited guests during the networking reception.

If you are considering starting a venture that commercializes university-owned intellectual property or are interested in understanding how to connect with investors, don’t miss this event.

Dr. Isabel Aznarez is the Vice President, Head of Biology and a co-founder of ASOthera Pharmaceuticals, a spinout company of Cold Spring Harbor Laboratory (CSHL). ASOthera’s mission is to develop drugs using antisense technology to treat orphan genetic diseases. Dr. Aznarez received a B.A. in Biology & Human Genetics from the University of the Republic, Uruguay (1995), and a Ph.D. in Molecular & Medical Genetics from the University of Toronto (2006) with Prof. Lap-Chee Tsui at the Hospital for Sick Children, Toronto. She joined Prof. Adrian Krainer (co-founder of ASOthera) at CSHL in 2008, initially as a Postdoctoral Fellow. In 2012 she became a Research Investigator at CSHL. Dr. Aznarez has expertise in human genetics and RNA processing pathways such as pre-mRNA splicing and nonsense-mediated mRNA decay (NMD). Her research in the Krainer lab focused on elucidating the connections between splicing and NMD, and developing therapeutic tools using antisense technology to modulate RNA metabolic pathways to treat genetic diseases. Dr. Aznarez led the research that became the basis of ASOthera’s core technology. She is the recipient of a Canadian Institutes of Health Research Fellowship Award; a Harvey Karp Foundation Fellowship Award; and two Canadian Cystic Fibrosis Foundation Fellowship Awards. Dr. Aznarez is a member of the Oligonucleotide Therapeutic Society, the RNA Society, and she previously served on the entrepreneurial scientific advisory panel of New York City Tech Connect.

Dynami-Cal began as a senior design collaboration between The City College of New York (CCNY) and the Translational and Molecular Imaging Institute (TMII) at Mount Sinai. The project goal was to develop an MRI calibration device, or phantom, that would be able to correct for imaging errors when performing measurements of the spinal cord. At the conclusion of the class, a proof-of-concept prototype had been developed and tested, with promising results for future development. Interested in developing the project further, as well as investigating its market potential, two of the members of the CCNY senior design team, Joe Borrello and Jamil Reja, formed Dynami-Cal.

The imaging and prototyping facilities at both Mount Sinai and CCNY provided Dynami-Cal with excellent access to resources for developing the physical product; through the NYCRIN I-Corps program, though, Joe and Jamil began to develop their understanding of the market their technology would be a part of. For the two months of the I-Corps program, Dynami-Cal was almost exclusively dedicated to learning about potential markets, customer segments and product development cycles. The information and contacts gained through the program were brought back to the lab where the vast majority of it has been invaluable to subsequent research and development goals.

Now both enrolled in the Icahn School of Medicine at Mount Sinai – Jamil as an MD student and Joe as a PhD student – Joe and Jamil are continuing to work on the Dynami-Cal startup as well as becoming involved in tangential areas of research and clinical practice. Joe, in particular, has also brought his I-Corps and startup experiences to Mount Sinai’s new Design, Technology and Entrepreneurship PhD training area, as well as to programs and initiatives run by the Mount Sinai Institute of Technology and its Rapid Prototyping Center.

Ramphis is the New York City Managing Director for the Silicon Valley-based Founder Institute, the world's largest entrepreneur training and startup launch program, helping aspiring founders across the globe build enduring technology companies. He is a Kauffman Fellow, a community of over 400 innovation investors worldwide representing 160 venture firms and corporate venture groups in 26 countries on 6 continents, collectively deploying $50B in venture capital.

He is a founding partner of Mindchemy, a full-stack startup ecosystem acceleration & support organization that deploys programs facilitating experiential education to all stakeholders in a country. From entrepreneurs to emerging managers in the venture industry, Mindchemy has supported ecosystem growth in dozens of countries around the world. Most recently, he has been planting the seeds to launch the first Startup Weekend in Cuba.

As a long time Global Facilitator for UP Global/Techstars, a global organization dedicated to fostering entrepreneurship, grassroots leadership, and strong communities, he has helped train hundreds of academics and lean startup instructors around the world on the principles and practices used for the Lean Launch Pad and iCorp programs.  He serves as Adjunct for the New York City Regional Innovation Node's I-Corp Program.

He has served as policy adviser on entrepreneurship, technology, and economic development policy to leaders in Puerto Rico, Norway, Dominican Republic, Colombia, Guatemala, among others.

Dr. Maria Luisa Pineda is a cell and molecular biologist with over 10 years of research experience. She graduated from Barry University with a Bachelor of Science and a minor in Mathematics. As an undergraduate student was able to acquire an endowment of $2 Million dollars from the Goizueta Foundation and lobby the foundation to renew it after her graduation. She is the first recipient of the Goizueta Minority Science Scholarship and was a NIH fellow with the Minority Access to Research Careers (MARC U*STAR) Award. Maria recently received her PhD from the Watson School of Biological Sciences at Cold Spring Harbor Laboratory as an Arnold and Mabel Beckman graduate student and a William Randolph Hearst foundation scholar. She decided to combine science and business together with her critical-thinking and interpersonal skills by acquiring experience in investment of technology and life sciences startup companies at Canrock Ventures and Golden Seeds, LLC. Dr. Pineda is currently the CEO and co-founder of Envisagenics, Inc. a bioinformatics start-up company spinout of Cold Spring Harbor Laboratory.

Jorge is a professional early-stage investor who has helped launch two new investment firms since entering the venture capital industry. He currently serves as a Venture Partner at Silas Capital, where he invests in young companies across a range of consumer products categories such as Casper, Ringly, Tracksmith, and Pasta Chips. As a co-founder of VenSeed, he is building a platform to invest in the best new venture capital partnerships that are being formed in Silicon Valley, New York, and beyond. Prior to venture, Jorge practiced intellectual property law at several AmLaw 100 firms, where he counseled companies such as Microsoft, Google, and Nokia on complex dispute resolution and technology M&A. Jorge is a member of Kauffman Fellows, a network of investors who have completed a competitive two-year program dedicated to the world of venture capital and the cultivation of new high-technology, high-growth, high-impact companies. He holds a B.S. in Molecular Biophysics and Biochemistry from Yale and a law degree from the University of Pennsylvania. Jorge serves as a mentor at Founder Institute and at Blueprint Health. He is also on the advisory board of Legal Hackers.

Sabriya Stukes received her B.S in Biology with a concentration in Microbiology and Immunology in 2005 from Virginia Tech where she worked in the laboratory of Dr. Brenda Winkel researching point mutations in the flavonoid pathway in Arabidopsis thaliana. She was then awarded a post-baccalaureate fellowship at the National Institutes of Health characterizing genetic differences in macaque alleles before and after infection with HIV in the laboratory of Dr. Bernard LaFont. A year later, she was researching Mycobacterium tuberculosis and the effect it had on the activation of immune cells at the NYU Langone Medical Center under the mentorship of Dr. Joel Ernst. She recently earned her doctoral degree in Biomedical Sciences at The Albert Einstein College of Medicine in the laboratory of Dr. Arturo Casadevall. Her worked centered on understanding the mechanisms behind the host-pathogen interactions between macrophages and the fungal pathogen Cryptococcus neoformans. During her graduate studies, she became actively involved in a number of organizations and committees that helped to increase diversity and awareness in the science fields for women and underrepresented minority communities. This work led her to co-found Connect With STEM, a science outreach organization whose mission is to find, engage, and sustain a growing network of Connectors that will utilize their personal and professional networks to bring the STEM field to life for New York City schools and the students they serve. Currently, they have partnered with 9 schools throughout the New York City area and hope to introduce a wide breadth of science careers and individuals in these positions to as many students as possible.

MGSN is a student-run organization founded in the early 2000s to advance the interests of diversity in the sciences. The aim of MGSN is to create a community to help retain and increase the number of underrepresented minority graduate students pursuing professional degrees in the sciences.