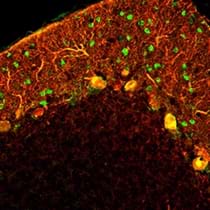 The microbiota in the human colon form one of the densest bacterial ecosystems known in nature. These microbial communities are integrally involved in maintaining numerous functions to keep humans healthy.

While research has traditionally focused on the role of the microbiome in disorders of the gut, there is a growing appreciation of a significant connection between microbiota and the central nervous system. The importance of the interconnectedness of these physiological systems is demonstrated upon dysregulation of the endemic microbiome which has been implicated in CNS development, psychiatric disorders and neurodegenerative disease.

This symposium focuses on the microbiota-gut-brain axis. It will highlight emerging science that is furthering our understanding of causal relationships between our microbiota and disease, as well as applications for human health. This is the second in a series of symposia addressing the impact of microbiota on the whole human.

Please note: Transmission of presentations via the webinar is subject to individual consent by the speakers. Therefore, we cannot guarantee that every speaker's presentation will be broadcast in full via the webinar. To access all speakers' presentations in full, we invite you to attend the live event in New York City where possible.

Dr. John Hambor is currently a Director of Research Beyond Borders at Boehringer Ingelheim where he coordinates a strategic postdoctoral research program focused on developing new therapeutic concepts in collaboration with academic investigators. Previously, Dr. Hambor was a consultant with the Cell Therapy Group, specializing in stem cell-based drug discovery. Prior to serving as CEO of CellDesign, a developer of next generation stem cell technologies, he contributed 17 years of research at Pfizer where he identified and validated new drug targets in the areas of inflammation and immunology and developed stem cell-based assays for drug efficacy and safety studies. Dr. Hambor received both a BA and MS degree in Microbiology from Miami University of Ohio, and earned a PhD in Pathology from Case Western Reserve University, followed by postdoctoral studies at Yale University in the Department of Immunobiology. He has been an Adjunct Assistant Professor at Connecticut College since 2000 where he teaches Immunology. He also serves as a member on the board of directors for the Connecticut Veterans Administration Research and Education Foundation and on the advisory committee for the Connecticut Regenerative Medicine Research Fund.

Nilufer Seth is a scientist in the Emerging Science Group in the Inflammation and Immunology Research Unit at Pfizer. She received her PhD from Medical College of Augusta in Molecular Biology and Biochemistry. She then joined the Dana-Farber Cancer Institute for her post-doctoral training where her research focused on the design and development of novel approaches to ex vivo identify and analyze antigen-specific CD4 T cells subsets in human diseases and mouse models of autoimmunity. She studied antigen specific T cells from HIV and HCV infected individuals as well as in the NOD mouse model of Type 1 Diabetes. She joined the Department of Inflammation and Immunology at Wyeth where she worked on small and large molecule therapeutic programs targeting immune cells and inflammatory cytokines. Currently at Pfizer she is leading and developing the microbiome strategy, efforts and projects. Her focus is on developing medicines that will reshape the treatment of inflammatory and autoimmune diseases by harnessing strategies and pathways used by the human gut microbiota to maintain barrier and immune homeostasis.

Erick R. R. Young obtained his PhD in synthetic bioorganic chemistry from The Pennsylvania State University and completed post-doctoral studies in natural product synthesis at The Ohio State University. Upon joining Boehringer Ingelheim Pharmaceuticals in 1998 he served as a small molecule research project leader for immunology & cardiometabolic diseases. Over time, he became increasingly involved in the generation of new target concepts and championing novel therapeutic modalities for the enablement of new target class space, areas where he has made significant contributions to the BI research strategy & portfolio. He is currently the Director of External Innovation for the newly formed Research Beyond Borders division of BI where his primary focus is the conception, identification & enablement of new therapeutic mechanisms and disease indications outside the organizations current scope or capabilities.

Dr. Bercik graduated as MD from Charles University, Prague, Czechoslovakia. He obtained his doctorate degree from University of Lausanne, Switzerland, where he studied neural control of gastrointestinal motility. He did his postdoctoral fellowship at McMaster University focusing on animal models of functional gastrointestinal diseases. Currently, he is Associate Professor in Division of Gastroenterology, and director of Clinical Motility laboratory at McMaster University, Canada. His basic and clinical research focuses on the role of intestinal bacteria in gut brain axis and functional bowel disorders.

John F. Cryan is Professor & Chair, Dept. of Anatomy & Neuroscience, and a Principal Investigator in the APC Microbiome Institute at University College Cork, Ireland. He received a BSc and PhD from the National University of Ireland, Galway, Ireland. He was a visiting fellow at the University of Melbourne, Australia, which was followed by postdoctoral fellowships at the University of Pennsylvania, Philadelphia, USA and The Scripps Research Institute, La Jolla, California. He spent four years at the Novartis Institutes for BioMedical Research in Basel Switzerland, as a LabHead, Behavioural Pharmacology prior to joining UCC in 2005. Prof. Cryan's current research is focused on understanding the interaction between brain, gut & microbiome and how it applies to stress, neuropsychiatric and immune-related disorders.

Prof. Cryan has published over 300 peer-reviewed articles. He is a Senior Editor of Neuropharmacology and of Nutritional Neuroscience and an Editor of British Journal of Pharmacology and is on the editorial board of a further 15 journals. He has won numerous awards and is a regular media contributor. He was a TEDMED speaker in Washington in 2014 and named President-elect of the European Behavioural Pharmacology Society in 2015.

Ted Dinan is Professor of Psychiatry and a Principal Investigator in the APC Microbiome Institute at University College Cork. He was previously Chair of Clinical Neurosciences and Professor of Psychological Medicine at St. Bartholomew's Hospital, London. Prior to that, he was a Senior Lecturer in Psychiatry at Trinity College Dublin. He has worked in research laboratories on both sides of the Atlantic and has a PhD in Pharmacology from the University of London. He is a Fellow of the Royal Colleges of Physicians and Psychiatrists and a Fellow of the American College of Physicians. His main research interest is in the role of the gut microbiota in stress related disorders. He has also worked extensively on the regulation of the hypothalamic-pituitary-adrenal axis. In 1995 was awarded the Melvin Ramsey Prize for research into the biology of stress. His current research is funded by Science Foundation Ireland, the Health Research Board and European Union FP7. He has published over 400 papers and numerous books on pharmacology and neurobiology. He is on the Editorial Boards of several journals.

Dr. Mayer has a career long interest in clinical and research aspects of brain body interactions, with a longstanding focus on brain gut interactions in health and disease. A particular research focus has been the role of the gut microbiota in brain gut communication in humans. He is the executive director of the Oppenheimer Center for Neurobiology of Stress and Resilience, and co-Director of the CURE: Digestive Diseases Research Center He has been continuously funded by the National Institutes of Health since 1989. He has published 330 peer reviewed articles in the leading GI and Neuroscience journals, including 100 reviews and book chapters and has co-edited three books. He is currently working on a lay book on the interactions between the gut microbiome and the brain (the Mind Gut Connection), and has recently given a TEDx talk on the same topic.

Sarkis K. Mazmanian, PhD, is the Louis & Nelly Soux Professor of Microbiology in the Division of Biology & Biological Engineering at the California Institute of Technology (Caltech). Dr. Mazmanian received his training in microbiology and immunology at the University of California, Los Angeles, exploring mechanism by which Gram-positive pathogens anchor surface protein adhesins during bacterial infection. He was a Helen Hay Whitney Fellow at Harvard Medical School where he studied how symbiotic bacteria promote healthy maturation of the immune system. Dr. Mazmanian has won numerous awards including a Searle Scholar, Damon Runyon-Rachleff Innovation Award, was named by Discover magazine as one of the Best Brains in Science under 40, and received the MacArthur Foundation "Genius" award. His laboratory focuses on the study of beneficial bacterial molecules from the human gut microbiome as novel therapies for immunologic and neurologic disorders.

Vassilis Pachnis graduated from the Medical School of the University of Athens (Greece). Following a short clinical training he enrolled at the University of Pennsylvania (Philadelphia, PA) as a PhD student in Molecular Genetics under the supervision of Prof. Shirley Tilghman. Upon completion of his PhD work he moved to Columbia University (New York, NY) where he did postdoctoral work in Dr. Richard Axel's and Dr. Frank Costantini's laboratories. Since 1991 he is running his own laboratory at the MRC National Institute for Medical Research (Mill Hill, London, UK). In April 2015, the National Institute for Medical Research became part of The Francis Crick Institute (London, UK). Throughout his independent career, Dr Pachnis' work has focused on understanding of the genetic and molecular mechanisms that control the development of the nervous system in vertebrates. Dr Pachnis an EMBO Member and a Fellow of the Academy of Medical Sciences (London, UK).

Dr. Yolken is a Pediatrician and Virologist. After receiving training at Harvard, Yale, and the National Institutes of Health, he joined the faculty of the Johns Hopkins Department of Pediatrics in 1979. He currently holds the position of the Ted and Veda Stanley Distinguished Professor of Developmental Neurovirology in that Department. Most of Dr. Yolken's early research was directed at the study of enteric viruses such as Rotaviruses. At the suggestion of Dr. E Fuller Torrey, Dr. Yolken became interested in the role of infections and inflammation in the pathogenesis of serious psychiatric disorders such as schizophrenia and bipolar disorder. Dr. Yolken developed many of the diagnostic assays for viral infections which are in current use. He and his colleagues have applied these methods for the detection of infectious agents which might be involved in schizophrenia, bipolar disorder, autism and related disorders particularly in regards to the gastrointestinal tract. He is author or coauthor of more than 400 scientific papers and several recent books. His works closely with Dr. Faith Dickerson, Director of Psychology at the Sheppard Pratt Hospital, with whom he also shares family duties including raising children and pet cats.

The Microbiome Science Discussion Group is proudly supported by