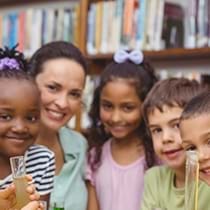 Placing STEM students and postdocs (undergraduates, graduate students and postdoctoral fellows) in K-12 learning environments to mentor, teach and do other forms of outreach is a well-known strategy to repair the leaky STEM pipeline. It is known that these STEM students and postdocs gain specific skills in mentoring, teaching, and communications during their experiences. It is also documented that they gain personal satisfaction, see it as their professional responsibility, and seek to gain these practical skills in a well-structured program. What are less well understood is the relationship between participation in these programs and long-term job opportunities, the transferability of gained skills to the workforce, and the role of these programs in steering scientists into teaching careers.

As a mutually beneficial partnership, identifying what works to recruit and retain subject matter experts in the STEM fields to serve as mentors, instructors and role models are key practices to scaling up programs.

In this conference, we seek to better understand how to design, administer and evaluate programs to best satisfy the needs of the K12 learners, their mentors and sponsoring faculty members and institutions.

Topics of discussion will include:

Participants will include grad students, post-docs, administrators and faculty members in different STEM disciplines, outreach professionals and program managers who administer outreach programs and researchers in the field.

Portions of this meeting, including the keynote addresses, will be presented as a Livestream. For full details see the link below:

This event is free but registration is required. This is a two day event. To register for the first day visit this link.

College of Environmental Science and Forestry

Brandon Murphy is a Project Coordinator in the Outreach Office of the SUNY College of Environmental Science and Forestry in Syracuse, NY. For the last 6 years he has been running the ESF Summer Camps Investigating Ecology in Neighborhood and City Environments (SCIENCE) Program and the Environmental Challenge 7th and 8th grade science fair for Syracuse City School District Students, as well as assisting with ESF's dual enrollment ESF in the High School Program and two Smart Scholars Early College High School partnerships. Brandon was also involved in the startup of the Central New York STEM Hub, a collaboration of local school districts, colleges, community organizations, and businesses. In addition to K-12 outreach, Brandon has also worked on a number of online education projects through the Outreach office, assisting faculty and industry based content experts in the development of online courses. Online course projects included the development of climate change courses, an advanced certificate in Radiation Curing, and non-credit professional education courses in the principles of radiation curing and radiation cured 3D printing technologies.

Kristine Paulsson has extensive experience with outreach programs, having created and implemented three different science related programs. During the three years they were running, the programs gained much popularity, with more than 15 000 participants (students). Topics included: HIV/AIDS, drinking & driving and illegal drugs & driving. Ms Paulsson is also a teacher and has primarily taught students, ages 16-18, in secondary school but she also has teaching experience with most age groups, including middle school students, junior high school students as well as adults. As a head teacher, she created and taught many new curricula, including a new curriculum for recent immigrant students, at the secondary school level. Kristine has worked with the SUNY/NYAS STEM mentoring program since fall-2012. Ms Paulsson has a Teacher’s Degree from the University of Lund, Sweden.

Elizabeth Rossi has conducted K12 STEM outreach programming at SUNY Poly since 1994. Her first project was to host STEM gender equity events for middle school girls. The TWIST (Tomorrow’s Women in Science and Technology) program brought middle school girls to campus to participate in hands-on STEM with female professors; the girls then had lunch and a panel discussion with women engineers from the community. She collaborates with teachers to host and run the annual Mohawk Valley Technology Education Showcase, serving 500 regional teens with a dozen hands-on STEM collaborative and competitive events. She is responsible for the academic camp program SummerITeens that reaches over 100 children annually, four FIRST Robotics programs that serve 1000 students each year, and the after-school STEM mentoring project. She and her team have created hands-on STEM modules that are being used in Utica City School District K-6 classrooms. They host on-campus STEM days for middle school students and community STEM/NANO Outreach Days. She is also a very proud grandmother.

Jenny Correa has a unique perspective on the value of Pinkerton grants. In 1998, three days after graduating from New York’s high school for pregnant and parenting teens and six weeks after the birth of her son Joel, she went to work as an “Explainer” in the Science Career Ladder program at the New York Hall of Science–a longtime Pinkerton grantee. While there, she completed her B.A. at Queens College and went on to earn a Master’s in Public Administration at Baruch College. She eventually rose to lead the 100 high school and college Explainers who guide thousands of visitors through the Hall of Science each year.  Jenny has presented papers and led discussions at science education conferences at home and abroad and has been recognized as a Next Generation Getty Leadership Fellow. She brought her interest and expertise in youth programs and science and technology training to Pinkerton in January of 2012.

A three-time American Olympian, Steve led his team to gold at the 2010 Vancouver Winter Olympic Games in 4-man bobsled. This was the U.S.’s first gold medal in the event in 62 years.  He is also a member of the Board of Directors of the United States Olympic Committee.

Before joining Classroom Champions in a full-time capacity, Steve was Principal and Lead Consultant at Shift 210, Inc, a leadership development consulting firm based in Calgary, AB. In Steve’s role at Shift 210 he worked with companies holding assets of more than a billion dollars to create better organizational leaders from middle management to executives, to improve engagement, retention, and performance.

Under Steve’s vision and leadership, Classroom Champions has grown from Steve being the only athlete involved in the pilot, working with 200 students, to now more than 50 Olympians and Paralympians who have mentored more than 10,000 students across the U.S. and Canada in less than five years.

As a finalist for the International Champion for Peace award, Steve was also named one of Sports Illustrated “Athletes Who Care” alongside the likes of Grant Hill and Larry Fitzgerald. Presenting at conferences around the world, Steve is an internationally recognized leader in the world of sport and education programming and philanthropy. Steve has also collaborated with the likes of TED, Big Think, and others to increase awareness of the importance of social and emotional learning in young students. Steve has presented on Classroom Champions and other education topics at conferences in Dubai, Sochi, Tel Aviv, Guatemala, and across the U.S. and Canada.

Steve is a member of the National Jewish Sports Hall of Fame, the Buffalo Sports Hall of Fame, and the University of Florida’s College of Health and Human Performance Alumni Hall of Fame, where he earned his bachelors degree with honors. Steve was also named one of Calgary’s Top 40 Under 40 as well as one of United Way’s “Do-Gooders”.

Rachel Stephenson is the University Director of the CUNY Service Corps and TheDream.US program. The CUNY Service Corps is the largest civic engagement and professional development program at an institution of higher education in the country, placing over 800 CUNY students per academic year in 134 non-profits and government agencies throughout New York City while providing robust training and supports. TheDream.US program is scholarship program for undocumented students. A former classroom teacher and program director of youth development, continuing education, and workforce development programs, Rachel has deep experience as an educator and administrator. Rachel has recently given a TEDxCUNY talk called "Against Grieving in Silence" and is an oral storyteller. She holds a BA in English from Trinity University and a Master of Fine Arts in Nonfiction Writing from Columbia University.