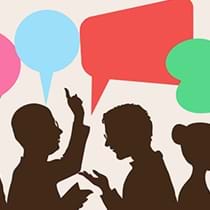 "Speaking" Science: How to Communicate, Connect with Audiences

What do Neil deGrasse Tyson, Bill Nye, and Mary Roach all have in common? They are effective science communicators who understand and connect with their audiences—whether it’s the general public, experts in their field, or policy makers. As an early-career scientist, this is the time to learn the science communication tricks and techniques that will allow you to more effectively teach, negotiate, communicate, and influence others on scientific matters. Don’t miss out on this rare opportunity that may otherwise not be offered at your institution or workplace to gain valuable skills in effective communication, now and throughout your career! The experience gained from this event will be a valuable foundation for any career in science.

This one-of-a-kind workshop, pioneered by six-time Emmy Award winning actor Alan Alda, will use interactive presentations, discussions, and improvisational theatre exercises to help participants gain valuable and fundamental communication skills: knowing your audience, connecting with your audience, and speaking clearly and conversationally about your work and why it matters. This unique and innovative workshop has been customized for the Academy and will provide an exclusive opportunity for instruction and guidance from the Alan Alda Center for Communicating Science at Stony Brook University.

“If you want or need to share your work with others in any context, these courses are indispensable. After I took Improvisation for Scientists, public speaking became much less intimidating to me and I was actually listening to my audience… With these things in mind, I recently gave a successful talk at a conference to over 100 people.”
—Kimberley Bell, PhD candidate in genetics

General principles in how to craft short, conversational statements, intelligible to non-scientists, about what you do and why it matters. Session consists of interactive presentation and discussion on interpreting technical material using examples and analogies to illuminate unfamiliar concepts to your audience. The plenary will address problems and solutions in public interactions as well as peer-to-peer communication. Participants will practice clarity in speaking to non-scientists about their work and may be actively engaged in improvisation exercises or explaining scientific material to lay people.

Improvisation for Scientists is a workshop pioneered by science advocate, Alan Alda. Participants will take part in improvisational theater exercises aimed at helping them connect more directly and spontaneously with different audiences. This is not about turning scientists into actors or comedians, but helping participants recognize and engage with the audience on a level where the message of the scientist can land effectively with the listener.  These games require participants to pay close dynamic attention to others and emphasize the two way nature of communication: What is received counts more than what is said. Through the course of training, participants will investigate body language, listen with more awareness, and respond with greater sensitivity.

These workshops are designed for undergraduates, graduate students, postdocs, and faculty in STEM fields.

Helena Binder was an actor and director of plays and musicals before focusing her career on opera, allowing her to bring her wit and warmth to many of the finest opera companies in the United States.  Her innovative and imaginative productions have been seen at New York City Opera, Dallas, Minnesota, Atlanta, Pittsburgh and Portland Opera, as well as at Opera Saratoga, Omaha, Syracuse, Chattanooga, Toledo, Roanoke and Wolf Trap among others.  A choreographer as well, she has created dances for the New York City Opera, Dallas, Pittsburgh and Glimmerglass Opera, and has directed the Legislative Correspondents Association Show at the New York State capitol, the oldest political satire revue in the country, since 1985.  For her distinguished career in the arts she was named a Union Notable by her alma mater, Union College.  Ms. Binder has taught acting at Union, the Opera Institute of Boston University’s School of Music, and the New England Conservatory, and is a guest teacher in improvisation at Dartmouth College.

Lydia Franco-Hodges, MFA, is an actor and acting teacher who has been teaching at Stony Brook University since 2003. Besides teaching classes in acting, movement and performance, Lydia leads workshops for the Alan Alda Center for Communicating Science in Improvisation for Scientists. Lydia served as Artistic Director for the world premiere of Ephemera at the Wang Center, which won the John Gassner New Play Award, and created, directed and choreographed Condemned and Medea, Again at the Fanny Brice Theater. She is a core member of Mulford Theatre, The Naked Stage, produces for Neo Political Cowgirls and was an integral part of the Comedy Improv Troupe, Just Say Yes. Lydia is currently remounting an Immersive Theatre production, which she originally produced and which won a 2012 Best of the Best Award.

Louisa Johnson grew up in Brooklyn, NY, and attended LaGuardia Arts High School with a concentration in Theater Arts. She received her Bachelor’s degree from Stony Brook University in Theater Arts and Philosophy, and her Masters degree from NYU Tisch in Acting. Louisa now teaches Improvisation for Scientists to graduates students and works with scientists nationwide for the Alda Center. She has worked as a professional actor in New York, and has appeared on stage and screen, but she always felt that theater had a broader purpose. She co-created and ran a confidence building writing and acting workshop at Girls’ Education and Mentoring Services (GEMS) in Harlem, and currently works with Hunts Point Alliance for Children, where she places underprivileged students into after-school arts programs in order to help them get into specialized high schools and eventually college.

Christie Nicholson produces and hosts Scientific American's podcasts 60-Second Mind and 60-Second Science and is an on-air contributor for Slate, Babelgum, Scientific American, Discovery Channel and Science Channel. She is a Contributing Editor at CBS' Interactive's Smart Planet. She has spoken about technology and communication at MIT/Stanford VLAB, SXSW Interactive, Sundance Film Festival, the National Science Foundation, the National Research Council, and the Space Studies Board. She holds degrees from the Columbia University Graduate School of Journalism and Dalhousie University in Canada. She is an editorial advisory member for the Science Media Centre of Canada. She is based New York.