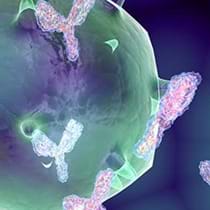 The Ross Prize in Molecular Medicine was established in conjunction with the Feinstein Institute for Medical Research and Molecular Medicine to recognize biomedical scientists whose discoveries transformed the way medicine is practiced. The awardees are midcareer researchers who have made a significant impact in the understanding of human disease pathogenesis and/or treatment. Moreover, it is anticipated that they will continue to make profound advances in the general field of molecular medicine.

The 2017 Ross Prize in Molecular Medicine will be awarded to Dr. Jeffrey V. Ravetch for his vital discovery of the mechanism by which the specific structure of antibodies controls immune cell reactivity. This work unveils the fine line between normal immune responses—such as those that remove foreign pathogens—and autoimmunity; processes that govern countless diseases. Dr. Ravetch's work continues to elucidate the complex cellular signaling that governs this fulcrum of immunity, and it is with this knowledge that new therapies will be pursued.

Although on-site registration may be possible on the day of the event, pre-registration is highly encouraged due to space limitations.

Antibodies produced in response to a foreign antigen are characterized by polyclonality, not only in the diverse epitopes to which their variable domains bind but also in the various effector molecules to which their constant regions (Fc domains) engage. Thus, while Fab-antigen interactions are crucial to the specificity of the antibody response, there is a crucial role for the Fc domain in mediating the diverse effector properties triggered by antigen recognition, even for processes traditionally attributed solely to recognition by the Fab, such as neutralization of toxins and viruses. Specific interactions of the IgG Fc domain with distinct receptors expressed by diverse immune cell types result in the pleiotropic effector functions for IgG, including the clearance of pathogens and toxins, lysis and removal of infected or malignant cells, modulation of the innate and adaptive branches of immunity to shape an immune response, and initiation of anti-inflammatory pathways that actively suppress immunity. The Fc domain mediates these diverse effector activities by engaging two distinct classes of Fc receptors (type I and type II) on the basis of the distinct conformational states that the Fc domain may adopt. These conformational states are regulated by the differences among antibody subclasses in their amino acid sequence and by the complex, biantennary Fc-associated N-linked glycan. I will discuss the diverse downstream proinflammatory, anti-inflammatory and immunomodulatory consequences of the engagement of type I and type II Fc receptors in the context of infectious, autoimmune, and neoplastic disorders.

When Rituxan, the first monoclonal antibody for the treatment of cancer was developed, it became clear that its mechanism of action involved the Fc receptor. We noticed that the likelihood of tumors to respond was greatly influenced by which of the two different forms of the Fc receptor gene (CD16) the patient had. One form was known to bind better to the Fc portion of the therapeutic antibody and patients who had this form had a higher tumor remission rate. This result was concordant with the now classical report by Clynes and Ravetch on the role of the Fc receptor (CD16) in the therapy of Rituxan against human tumors transplanted into mice.

Four Ebola patients received care at Emory University Hospital, presenting a unique opportunity to examine the cellular immune responses during acute Ebola virus infection. We found striking activation of both B and T cells in all four patients. Plasmablast frequencies were 10–50% of B cells, compared with less than 1% in healthy individuals. Many of these proliferating plasmablasts were IgG-positive, and this finding coincided with the presence of Ebola virus-specific IgG in the serum. Activated CD4 T cells ranged from 5 to 30%, compared with 1–2% in healthy controls. The most pronounced responses were seen in CD8 T cells, with over 50% of the CD8 T cells expressing markers of activation and proliferation. Taken together, these results suggest that all four patients developed robust immune responses during the acute phase of Ebola virus infection, a finding that would not have been predicted based on our current assumptions about the highly immunosuppressive nature of Ebola virus. Also, quite surprisingly, we found sustained immune activation after the virus was cleared from the plasma, observed most strikingly in the persistence of activated CD8 T cells, even 1 month after the patients’ discharge from the hospital. These results suggest continued antigen stimulation after resolution of the disease. From these convalescent time points, we identified CD4 and CD8 T-cell responses to several Ebola virus proteins, most notably the viral nucleoprotein. Knowledge of the viral proteins targeted by T cells during natural infection should be useful in designing vaccines against Ebola virus.