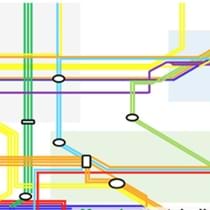 There has been a resurgence of interest in understanding how metabolic pathways are altered in cancer and how these alterations can be exploited for therapeutic gain. Many of the signaling pathways that drive tumorigenesis directly regulate metabolic pathways that support cell growth. Increasingly, metabolites themselves are recognized to play important roles regulating tumor initiation and progression. This meeting will bring experts together to discuss the intersection between cancer cell signaling and metabolism and explore how cancer cells exploit cellular signaling and metabolic pathways to support malignant growth.

Abstract submissions are invited for a poster session. For complete submission instructions, please send an email to Metabolism2017@nyas.org with the words "Abstract Information" in the subject line. The deadline for abstract submission is April 7, 2017.

Craig B. Thompson, MD, is the President and Chief Executive Officer of Memorial Sloan Kettering Cancer Center (MSKCC). Dr. Thompson received his BS from Dartmouth and MD from the University of Pennsylvania, followed by clinical training in internal medicine at Harvard Medical School and in medical oncology at the Fred Hutchinson Cancer Research Institute. Dr. Thompson has extensive research experience in cancer, immunology, and translational medicine. His current research focuses on the regulation of cellular metabolism during cell growth/differentiation and on the role that metabolic changes play in the origin and progression of cancer. Dr. Thompson is a member of the Institute of Medicine, the National Academy of Sciences, the American Academy of Arts and Sciences, and the Medical Advisory Board of the Howard Hughes Medical Institute. He is also a Fellow of the AACR Academy.

Navdeep S. Chandel, PhD, is the David W. Cugell Professor of Medicine and Cell Biology at the Feinberg School of Medicine, Northwestern University. He graduated with a bachelor of science in mathematics and PhD in cell physiology from the University of Chicago. His laboratory at Northwestern University studies how mitochondria communicate with the rest of the cell to regulate physiology and pathology. Historically, mitochondria have been primarily viewed as biosynthetic and bioenergetic organelles. His laboratory identified that mitochondria have a third distinct role whereby they act as signaling organelles by releasing reactive oxygen species (ROS) and metabolites to regulate distinct biological outcomes including differentiation, proliferation, and adaptation to metabolic stress. An important aspect of his ongoing research program is to decipher the role of mitochondrial metabolism and ROS in regulating tumorigenesis.

Heather Christofk is an Associate Professor in the Departments of Molecular and Medical Pharmacology and Biological Chemistry at UCLA. Her research focuses on the regulation and role of metabolic transitions in cellular transformation, virus infection, and differentiation. By elucidating regulatory mechanisms for metabolic transitions in normal and disease states, she hopes to identify diagnostic and treatment strategies for cancer patients. She received a bachelor's degree from UCLA, a doctorate from Harvard University under the mentorship of Dr. Lewis Cantley, and conducted postdoctoral research with Dr. Frank McCormick at UCSF. Dr. Christofk is a Searle Scholar and has been awarded a Damon Runyon-Rachleff Innovation Award, an NIH Director's New Innovator Award, and an American Cancer Society Research Scholar Award.

Ralph J. DeBerardinis is interested in how altered metabolism contributes to disease. He obtained his MD and PhD from the University of Pennsylvania, and clinical expertise in Pediatrics and Medical Genetics at The Children's Hospital of Philadelphia. Dr. DeBerardinis is Associate Professor in the Children's Research Institute (CRI) at the University of Texas Southwestern Medical Center. He holds the Joel B. Steinberg, MD Chair in Pediatrics and is clinical Division Chief of Pediatric Genetics and Metabolism. The DeBerardinis laboratory focuses on identifying metabolic pathways required for tumor cell growth, and on developing methods to analyze metabolism in vivo. In 2013, Dr. DeBerardinis established the Genetic and Metabolic Disease Program in the CRI, which seeks to synergize clinical and research efforts at UT Southwestern to discover, understand, and treat metabolic diseases in children.

Lydia Finley is an Assistant Member in the Cell Biology Program at Memorial Sloan Kettering Cancer Center. Dr. Finley received her BS from Yale University and then completed her PhD in the laboratory of Dr. Marcia Haigis at Harvard Medical School. As a postdoctoral fellow in the laboratory of Dr. Craig Thompson at Memorial Sloan Kettering Cancer Center, Dr. Finley identified metabolites that contribute to the regulation of stem cell self-renewal. Her current work investigates the mechanisms that link metabolic pathways to cell fate decisions. She is the recipient of the Jack Sorrell Fellowship of the Damon Runyon Cancer Research Foundation and the Dale F. Frey Award for Breakthrough Scientists.

Dr. Kimmelman has published over 50 articles which extensively delve into the cancer field. As an NIH funded investigator, he has been studying the critical biological functions of Ras oncogenes for more than 15 years. Dr. Kimmelman's lab is currently focused on the basic and translational science of pancreatic cancer biology. His research has elucidated unique metabolic pathways in pancreatic cancer and has identified how the Kras oncogene can re-wire the metabolism of these tumors. This body of work has served to define the metabolic landscape of pancreatic cancer and has paved the way for multiple clinical trials in this disease.

Dr. Kimmelman earned his MD and PhD from The Mount Sinai School of Medicine in New York. Subsequently, he joined Harvard Medical School as a clinical fellow and completed his training in Radiation Oncology as well as a postdoctoral fellowship at the Dana Farber Cancer Institute. Prior to joining NYUMC, Dr. Kimmelman ran a vibrant research program at the Dana Farber focused on pancreatic cancer. He was also an attending physician in Brigham and Women's Hospital and Dana-Farber Cancer Institute, where he specialized in gastrointestinal malignancies, including pancreatic cancer. He serves as an ad-hoc reviewer on the editorial boards of several leading scientific journals. His own research has been published in many prestigious journals, including Cell, Science, Nature, Cancer Cell, Cancer Discovery, and Genes & Development. He has received numerous honors and awards, including the Ruth Leff Siegel Award for Excellence in Pancreatic Cancer Research from Columbia University for the researcher who has made the most significant contribution to pancreatic cancer research and he was elected to the American Society of Clinical Investigation.

Dr. Jared Rutter is a Professor of Biochemistry and holds the Dee Glen and Ida Smith Endowed Chair for Cancer Research at the University of Utah where he has been on the faculty since 2003. As of September 2015, he is also an Investigator of the Howard Hughes Medical Institute. His laboratory employs a wide array of technologies to enable discovery related to metabolic control as well as fundamental aspects of mitochondrial biology. The Rutter laboratory has characterized the PAS kinase protein as an important factor in states of metabolic dysregulation-including obesity and diabetes. More recently, the Rutter laboratory and collaborators have identified the functions of a number of previously uncharacterized mitochondrial proteins, including the discovery of the long-sought mitochondrial pyruvate carrier. This knowledge has now enabled for the first time the interrogation of this critical metabolic step for impact in a variety of human diseases, including cancer and cardiovascular disease. Dr. Rutter is also actively involved in translating these academic discoveries into therapies for patients. Dr. Rutter also serves as co-Director of the Diabetes and Metabolism Center at the University of Utah and co-Leader of the Nuclear Control of Cell Growth and Differentiation at Huntsman Cancer Institute.

The Beatson Institute for Cancer Research

Karen received her PhD in Genetics from the University of London, followed by postdoctoral fellowships with Chris Marshall at the Institute of Cancer Research in London and Douglas Lowy at the NCI. She led groups at the Ludwig Institute for Cancer Research in London and the NCI in Frederick, before becoming Director of the CRUK Beatson Institute in Glasgow. She is currently the Chief Scientist for Cancer Research UK. Karen's own research focuses on the tumour suppressor protein p53 and cancer metabolism. She has been elected as a Fellow of the Royal Society, the Royal Society of Edinburgh, the Academy of Medical Sciences, EMBO, the European Academy of Sciences and the American Academy of Arts and Sciences. She has also received honorary DScs from the Universities of London and Strathclyde and is an honorary Fellow of the Royal College of Physicians and Surgeons (Glasgow). Karen's awards include the Tenovus Gold Medal, the Sir Frederick Gowland Hopkins Medal, the Royal Medal from the Royal Society of Edinburgh and she was made a Commander of the British Empire for services to clinical science. She has been on the Board of Directors of the AACR and is a member of the EMBO Council.