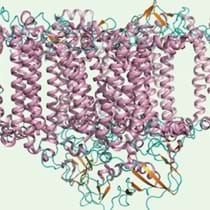 The New York metropolitan area is home to a strong community of structural biologists, biophysicists, and biochemists working to characterize the structures and mechanisms of action of proteins and other macromolecules. Launched in 1994 the New York Structural Biology Discussion Group offers a relaxed forum for them to meet and discuss their findings, exchange ideas, network, and form research collaborations. The group convenes twice annually and presents talks and poster sessions from graduate students, postdocs, and laboratory heads. The program committee selects presentations focusing on new and exciting data from laboratories in the metropolitan area.

This program is supported in part by an educational grant from Merck and Co., Inc.

David Jeruzalmi is a Professor of Biochemistry & Chemistry at City College of New York. He and his research group have a long standing interest in proteins that do interesting things with DNA. He obtained his PhD from Yale University for work with Professor Thomas Steitz. After completing post-Doctoral training at The Rockefeller University with Professor John Kuriyan and Professor Mike O'Donnell, he started his independent research career in the Department of Molecular and Cellular Biology at Harvard University. In 2012, Professor Jeruzalmi returned to New York City and moved his lab to City College of New York.

Richard H. Ebright, PhD, is Board of Governors Professor of Chemistry and Chemical Biology at Rutgers University and Laboratory Director at the Waksman Institute of Microbiology. His research focusses on the structure, mechanism, and regulation of bacterial transcription complexes, and on the development of inhibitors of bacterial transcription as antituberculosis agents and broad spectrum antibacterial agents. He received his AB (Biology, summa cum laude) and PhD (Microbiology and Molecular Genetics) degrees from Harvard University. He performed graduate research at Harvard and the Institut Pasteur and was a Junior Fellow of the Harvard University Society of Fellows. In 1987, he was appointed as a Laboratory Director at the Waksman Institute and a faculty member at Rutgers University. From 1997 to 2013, he was co-appointed as an Investigator of the Howard Hughes Medical Institute. He has received the Searle Scholar Award, the Schering-Plough Award of the American Society for Biochemistry and Molecular Biology, and the National Institutes of Health MERIT Award. He is a Member of the American Academy of Arts and Sciences and a Fellow of the American Association for Advancement of Science, the American Academy of Microbiology, and the Infectious Diseases Society of America.

Dan is an Associate Research Scientist in the Department of Pharmacology and Cancer Biology Institute at the Yale School of Medicine. Through the mentorship of Mark Lemmon, Dan studies cell signaling by receptor tyrosine kinases—in particular the epidermal growth factor receptor, and how different growth factor ligands can promote unique cellular responses when signaling through the same EGF receptor. Dan's interest in processes that occur at cell membranes began as an undergraduate researcher where he studied phase coexistence and lipid microdomain formation with Paulo Almeida at the University of North Carolina Wilmington. He continued his training at the University of Virginia, where he received a PhD degree studying membrane transporters under the tutelage of David Cafiso. During his graduate work, Dan characterized a substrate-induced transmembrane signaling mechanism used by these transporters, and developed an interest in allosteric regulation of transmembrane signaling. This motivated Dan to do his postdoctoral studies with Mark Lemmon at the University of Pennsylvania, before moving to Yale in 2015.

Jarrod is an assistant professor with a joint appointment in the Departments of Chemistry, and Biochemistry & Cell Biology at Stony Brook University. He was born in Niagara Falls, Canada and completed his BSc in Chemistry and Biology at Brock University. For his graduate studies, he was part of a tri-institutional chemical biology training program at Cornell University, Rockefeller University and Memorial Sloan-Kettering Cancer Center. Jarrod spent two years in New York City, under the direction of Anthony Sauve, investigating the mechanistic enzymology of Sirtuins and related proteins. He completed his PhD training in the laboratory of Steven Ealick at Cornell. There, he primarily worked on the structure and function of proteins involved in purine metabolism using X-ray crystallography. After earning his PhD, Jarrod went on to become a Canadian Institutes of Health Research Postdoctoral Fellow at Penn State University in the laboratory of Stephen Benkovic. There, he used an integrative, cross-disciplinary approach to investigate a newly discovered protein complex called the purinosome. Jarrod began his independent academic career at Stony Brook in 2014. His lab currently investigates the molecular determinants of the purinosome, develops novel methods for X-ray crystallography and uses structure-based approaches to develop novel small molecules with immunostimulatory effects.

Ching-Shin Huang is a PhD student of Dr. David L. Stokes at NYU School of Medicine. Under the instruction of Dr. Stokes and the collaborator, Dr. Bjorn Pedersen, he recently resolved the structure of a potassium pump from E. coli. Ching-Shin Huang was born in Taiwan. He received his BS and MS in biochemistry from National Taiwan University in 2006 and 2008, respectively. He worked with Dr. Chii-Shen Yang establishing methods based on fluorescence to monitor protein–protein interaction when he was in National Taiwan University. After one year of mandatory army service, he was awarded a scholarship and admitted to NYU School of Medicine in 2010. He is expected to defend his PhD degree in the spring of 2017.

Jean Jakoncic is a Scientist in the Life Science and Biomedical Technology Research Resource (LSBR) which provides facilities and support at the National Synchrotron Light Source II (NSLS-II) for structural biologists. Jean received his PhD in 2007 from the Universite Joseph Fourier, Grenoble, France, in the field of Molecular and Structural Physical Chemistry. From 2007 to 2014, Jean worked at the NSLS beamline X6A where he supported a broad structural biology community and worked on collaborative and personal projects including bio-remediation of carcinogenic molecules, drug discovery, radiation damage mitigation, anomalous scattering methods. In 2014, Jean joined the NIH funded ABBIX project (Advanced Beamlines for Biological Investigations with X-rays) to complete 3 state of the art beamlines at the NSLS-II to support structural biology projects. Currently, Jean and his co-workers are developing advanced automated sample exchange and structural determination pipelines to support experiments taking advantage of the unique properties of the 2 beamlines AMX and FMX.

Dr. David Rooklin is currently an Associate Research Scientist in the Department of Chemistry at New York University, working in the lab of Prof. Yingkai Zhang. First an alumnus of Oberlin College, where David won multiple awards for high achievement in chemistry, he was later introduced to computational chemistry research and performed quantum calculations in the lab of Prof. Josef Michl at the University of Colorado. Advised by Prof. Zhang, David earned his PhD from NYU in 2012 by combining molecular dynamics simulation with QM / MM calculations to study the structural and chemical details of enzymatic reaction mechanisms. As a postdoc at NYU, David developed a new method—AlphaSpace—to map the topography of protein surfaces at the fragment-centric resolution. He is now expanding AlphaSpace into a dynamic molecular design platform and is the founder of Redesign Science, a startup company applying this novel platform for drug discovery aimed at emerging and challenging drug target classes.

Giovanna Scapin graduated Magna cum Laude in 1985 from Padova University (Italy) with a degree in Organic Chemistry. In 1989 she received her PhD in Organic Chemistry from the same university with a thesis in Structural Biology. In February 1990 Giovanna joined the laboratory of Dr. James C. Sacchettini at the Albert Einstein College of Medicine, Bronx (NY), as postdoctoral fellow, and subsequently as Instructor. Her interest was initially for a class of small fatty acid binding proteins that had been related to obesity and diabetes. Subsequently most of her work was involved in bacterial enzymes that could be used as target for the design of novel antibiotics. During the 6 years Giovanna spent there, she mentored several graduated students and post-doctoral fellows. In 1997 Giovanna joined Merck and Co., Inc, where she was involved in several projects, providing structural biology support for diabetes, inflammation and oncology targets. She developed and still maintains a particular interest in the structural aspects of Protein Kinases inhibition. Her more recent work focused on the diabetes target DPP-4, and how structural biology and modeling have helped the development of several potent inhibitors, and on the structure-function of antibodies. Giovanna published over 70 papers in peer-reviewed journals, and has been invited to give several talks about her research at local universities and at national and international meetings. Since 2010, Giovanna is an active member of the organizing committee for the International School of Crystallography.

Sam Sparks is a PhD student in the lab of Dr. David Cowburn at Albert Einstein College of Medicine. In collaboration with Dr. Michael Rout, at Rockefeller University, he studies the biophysical properties of disordered nuclear pore proteins that are crucial to the function of the nuclear pore complex. A native of New York, Sam obtained his BA and MA in chemistry from Clark University in Massachusetts in 2010 and 2011. There he studied disordered, aggregation-prone proteins associated with disease. He returned to New York in 2011 and continued to develop his interests in studied intrinsically disordered proteins. He is expected to defend his PhD in the spring of 2017.

Thomas Walz received his PhD in Biophysics in 1996 from the University of Basel, where he worked at the Maurice E. Müller Institute under the mentorship of Dr. A. Engel. He was a postdoctoral fellow in Dr. P. Bullough's group in the Krebs Institute at the University of Sheffield, where he became an independent BBSRC David Phillips research fellow. In 1999 he joined the faculty of the Department of Cell Biology at Harvard Medical School and was promoted to full professor in 2007. From 2008 to 2015, Dr. Walz was an investigator of the Howard Hughes Medical Institute, and in 2016 he moved to The Rockefeller University, where he is Professor and Head of the Laboratory of Molecular Electron Microscopy.