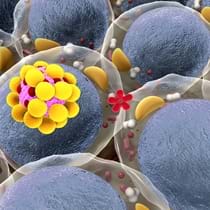 A large unmet medical need persists across the spectrum of autoimmune and inflammatory diseases. Emerging evidence suggests that immune cell fate is tightly regulated by changes in metabolic programming, including aerobic glycolysis (the Warburg effect), fatty acid synthesis and oxidation, and mitochondrial activity. Modulation of these pathways by cytokines, growth factors, and microbial products, as well as nutrient availability, controls the ability of lymphocytes to proliferate and produce specific immune effector molecules. Consequently, changes in immune cell metabolism can have a major impact on the progression and resolution of autoimmune and inflammatory diseases.

This symposium will explore the immunometabolic pathways that govern innate and adaptive immune cell activation, with a view to highlighting core pathways and specific enzymes that are likely therapeutic targets for autoimmune diseases and dysregulated inflammation.

Memory CD8 T cells arise following infection from a heterogenous population of effector T cells that contains cells of various differentiation states. Many of these effector CD8 T cells develop into end-stage terminal effector cells that die following infection and a smaller portion develops into cells with greater memory cell potential and longevity. Understanding how effector CD8 T cell differentiation is regulated to generate cells of diverse cell fates is important and much progress has been made in identifying several transcriptional factors that regulate effector and memory cell fates, function and phenotypes. In this talk we will discuss how the epigenetic landscape of different subsets of effector T cells varies and impacts their long-term fates and multipotency.

Unexpected Roles for the Complosome in Normal Cell Physiology

Complement is engrained in the immunologist’s mind as quintessential part of innate immunity, vitally required for the detection and removal of invading pathogens. This current understanding of the complement system is rooted in the prevailing perception that complement operates mostly as a serum effector system. Recent work challenges this view: Complement activation is not – as always thought - confined to the extracellular space but can be activated intracellularly where it mediates (often in crosstalk with the NLRP3 inflammasome) specific intracellular signaling events connected with the cell’s nutrient and metabolism sensing machinery. Importantly, this serum-independent, but intracellular and autocrine functioning complement system – which we have coined ‘complosome’ - is an integral and critical part of human Th1 induction and contraction and dysregulation of the complosome causes autoimmune disease. The discovery of the complosome and its non-canonical functions have significant implications for both basic science and clinical perspectives - as they indicate that complement may be critical to many non-immune functions including the regulation of basic cell physiology.

Modulation of the Immune System by Adipocytes

Identification of Commensal Gut Bacteria with Potential to Influence Autoimmunity

Metabolic reprogramming is an essential part of the T cell activation program. Upon activation, T cells undergo dramatic rewiring of their metabolic pathways to promote ATP production and biosynthesis sufficient to support the rapid exponential growth of antigen-specific T cells. The metabolic profile of T cells is shaped by both cell-intrinsic factors, such as genetics and receptor-mediated signaling, and environmental conditions, such as nutrient availability. We have combined classical immunological modeling of T cell responses with metabolic analysis (i.e., bioenergetic profiling, stable isotope tracing) to study the impact of metabolic reprogramming on T cell function. Metabolomic analysis has revealed increased activity of the serine, glycine, and one-carbon (SGOC) metabolism pathway in proliferating T cells, highlighting key roles for the amino acids serine and methionine in T cell function beyond their role in protein synthesis. Our data indicate that serine and methionine fuel distinct pathways of one-carbon metabolism in T cells to impact cell proliferation, viability, and T helper cell lineage commitment. I will discuss how T cells manage utilization of these amino acids, their impact on T cell function and adaptive immunity, and implications for autoimmunity.

Contribution of Iron to Intrinsic and Extrinsic Macrophage Immunometabolism

Every cell in the body requires iron – for respiration, DNA synthesis, and proliferation; however, iron-overload can lead to oxidative damage. Macrophages (Mϕs) reside in all tissues and show remarkable plasticity specific to their local environment, rapidly polarizating on a spectrum from M1-like inflammatory to M2-like tissue repair phenotypes. We identified a unique subpopulation of adipose tissue (AT) Mϕs that have an iron-recycling phenotype and are highly M2-polarized. We refer to these iron-rich ATMϕs as MFehi and the remaining ATMϕs as MFelo. Our overarching hypothesis is that some tissue resident Mϕs are “ferrostats”, sensing and responding to local tissue iron needs, and that MFehi cells provide that function in AT. Similar to reticuloendothelial Mϕs and Kupffer cells that recycle hemoglobin and contribute to systemic iron availability, MFehi Mϕs express high levels of iron-related genes such as CD163 (the hemoglobin-haptoglobin receptor) that is uniquely expressed on M2-like Mϕs, transferrin receptor, and the iron exporter, ferroportin. Furthermore, we show that these specialized Mϕs take up excess iron, protecting the adipocytes from iron overload. Intrinsic metabolic changes in fuel utilization can affect Mϕ polarization, and conversely, Mϕ polarization can influence their interactions with parenchymal cells via their extrinsic immunometabolic secretory functions. While our MFehi cells express some M2 genes, we have intriguing preliminary data showing that MFehi bioenergetics are different than M2 bioenergetics, suggesting that AT MFehi cells are uniquely polarized. Ongoing studies seek to determine the importance of iron handling to intrinsic and extrinsic ATMϕ function.

Systemic lupus erythematosus (SLE) is an autoimmune disease mediated by pathogenic autoantibodies directed against nucleoprotein complexes. Beyond the activation of autoreactive B cells, this process involves dysregulation in many other types of immune cells, including CD4+ T cells, dendritic cells, macrophages and neutrophils. Metabolic substrate utilization and integration of cues from energy sensors are critical checkpoints of effector functions in the immune system, with common as well as cell-specific programs. Most of the research has been conducted to define the metabolism of healthy immune cells, it is recognized that the overactive immune system that drives autoimmune diseases presents metabolic abnormalities that provide therapeutic opportunities, as well as a means to better understand the fundamental mechanisms of autoimmune activation. Patients with SLE as well as lupus-prone mice present with activated immune metabolism, mostly characterized in CD4+ T cells. Treatment with specific metabolic inhibitors to normalize these features has shown therapeutic effects. We will review the current knowledge of the alterations in metabolism of immune cells in patients with SLE and mouse models of lupus in the context of what is known about the metabolic regulation of these cells during normal immune responses. How these alterations might contribute to lupus pathogenesis and how they can be targeted therapeutically are also discussed.  Finally, we will review some of the unique features of the metabolic requirements of autoreactive immune cells, and how they can be used for therapeutic targeting while preserving protective immune responses.

Lymphocyte activation leads to rapid proliferation and differentiation and we have shown that CD4 T cell subsets are metabolically distinct. These specific metabolic programs may allow new understanding and approaches to manipulate immunity. Using metabolic network analysis of metabolomics and proteomics we defined several metabolic nodes differentially utilized by CD4 T cell subsets, including glutamine metabolism. By genetically deleting the glucose transporter Glut1 or the glutaminolysis enzyme, Glutaminase (GLS), we have shown that glycolysis and glutaminolysis are both used by activated T cells. All effector T cells require glycolysis, but we found that Th17 cells preferentially require GLS while Th1 cells are actively impaired by this enzyme. Thus, inhibition of GLS both reduces Th17 responses and promotes differentiation of Th1 cells and can lead to signs of T cell exhaustion. We show that GLS-deficiency can protect against Th17-mediated inflammatory models and also can augment effector function of Th1 CAR-T cells against B cell targets. Understanding mechanisms that regulate T cell metabolism may provide new tools to modulate immunity the balance of T cell effector populations to both suppress inflammation or promote effector function.