An unexpected truce in the war on pathogens

Much of immunology’s past has focused on defense: Generations of grad students have untangled host strategies for detecting and eliminating biologic threats. Legions of labs have designed antibiotics to stock the host’s arsenal. But the field may have an altogether different future, says Janelle Ayres, PhD, the Helen McLoraine Developmental Chair of the NOMIS Center for Immunobiology and Microbial Pathogenesis at the Salk Institute. “The traditional assumption was that you just had to be able to kill the pathogen — that’s all it took to survive an infection,” Ayres says. “That didn’t make sense to me because of the physiological damage that can happen. During an infection, the host immune response is doing far more damage than the microbe.” More than a decade ago, while other graduate students traced signaling pathways of the innate immune system, Ayres — then a doctoral student in David Schneider’s laboratory at Stanford — pursued an idea gleaned from plant biology literature: What if humans, like plants, express genes that boost fitness and allow them to coexist with pathogens until they can safely ride out an infection? In the years since, Ayres has uncovered an accomplice to the traditional immune system. The “cooperative defense” system, as she calls it, is less focused on death and destruction and more on cooperation and survival. “Often, a patient’s immune system is fully capable of killing an infection, but the patient dies from the pathology before they’re able to kill the infection,” Ayres says. Or, in other cases, the pathogen produces toxic compounds or disrupts physiological functions. By engaging the patient’s cooperative defense system, the patient can remain healthy enough for the immune system to come in and clear the infection. Her discovery has inspired a new branch of immunology and earned Ayres the 2018 Blavatnik National Award for Young Scientists.

In a groundbreaking paper published on September 20th 2018 in Cell, Ayres described the system in action. Mice infected with the diarrheal pathogen Citrobacter, a close relative of the pathogenic Escherichia coli strains, remain symptom-free by consuming iron-supplemented chow for two weeks. “We can promote co-operative defenses by giving a short course of dietary iron, which induces an acute state of insulin resistance,” she says. “This reduces the amount of glucose absorbed from the gut and suppresses expression of the pathogen’s virulence program.” The mice resumed their normal diet after treatment and are still alive a year later. “They’re perfectly healthy,” Ayres says. The microbe remains in the mouse gut, but no longer causes symptoms — even when that microbe is isolated and injected into naïve mice. “We’re not only able to treat the infection, but we also turn the microbe into a commensal and we drive the selection for strains that lose their virulence genes,” she says. Therapies that engage cooperative defenses could help humans gain an advantage in the war on drug-resistant microbes. “We are essentially in a pre-antibiotic era, meaning we’re running out of antibiotics that used to be our last resort. Many are no longer effective,” says Ayres. “We’re basically in as bad shape now as we were before we even developed antibiotics.” While the oft-touted solution is to develop newer, stronger antibiotics, Ayres champions a more farsighted approach. “We need to develop novel classes of antibiotics, but we also need to acknowledge that by focusing on methods that kill microbes, we’re driving the global crisis of antimicrobial resistance. We can’t solely think about treating infections from this antagonistic perspective,” she says. Therapies that engage the body’s cooperative defenses will drive human survival rather than microbial demise. As such, those therapies will likely be “evolution-proof,” meaning they won’t further the problem of drug resistance. Ayres’ findings suggest the war against pathogens can’t be won with defense alone. “And so,” she says, “we’re taking a completely different perspective.”

The smallest unit of life — the cell — has fascinated and bewildered scientists for ages. The prospect of producing a synthetic cell from scratch is particularly tantalizing, given the practical applications for diagnosing and treating disease. But to achieve that feat, scientists must address the simplest, most profound questions. “It’s almost philosophical: What is life? What is the chemistry from which life can emerge? Quite literally, when does chemistry become biology?” says Neal K. Devaraj, PhD, a professor of chemistry and biochemistry at the University of California, San Diego, and a winner of the 2018 Blavatnik National Award for Young Scientists. “I’m constantly reminded that life can come about from nothing. But if you really dive into it, it’s a black box. We really have no idea how this occurred,” he says. “What’s truly exciting, from a scientist’s perspective, is the unknown.” Though scientists haven’t yet produced a living cell from synthetic materials, Devaraj and others have come close. Chemistry-minded teams tend to tackle this goal from the bottom up, recreating reactions that spawned the first cell. Biology-minded teams work from the top down, stripping cells to their bare essentials in hopes of revealing the minimum requirements for life. Devaraj’s team takes a hybrid approach, examining the interface between chemistry and biology. “We’re not so concerned about the origin of life,” he says. “We’re more concerned about understanding how one creates materials that mimic cellular form and function, in a lab, using anything at our disposal.” His team uses chemical tools to parse biological questions, like the significance of a cell’s lipid coating. After dissecting the fatty compounds’ function, his lab introduced synthetic cells that can reproduce in perpetuity once encased in lipid shells and fed a proper diet. This has revolutionized strategies for diagnosing and treating lipid-related disorders. “These cells are far from being as sophisticated and complex as modern cells. They don’t contain DNA. They don’t undergo Darwinian evolution. But looking back at how cells may have evolved billions of years ago, who knows? Maybe the first cells did start off simply, like this,” he says. Devaraj’s longstanding curiosity about the origins of life burgeoned during his undergrad years at MIT, where he pursued a double major in chemistry and biology. During his doctoral studies at Stanford, he was tasked with writing a mock proposal for a faculty research position. “I was imagining what I could work on that would remain really exciting and difficult for decades,” he recalls. “And I was inspired by this idea of trying to mimic life.” One of his doctoral advisors, James Collman, specialized in biomimetic chemistry: creating compounds that mimic enzyme function. “If you think about it, the natural progression of biomimetic science is to mimic life itself, to mimic cells,” he says. “I was inspired to take it a bit further by exploring the minimal chemistry from which life can emerge.” Though his research is gratifying, Devaraj says his collaborations with students and postdocs are even more so. “What really gets me up every morning are the conversations about new data, new ways of thinking. It’s a very collaborative effort.” Early on, he staffed his lab with post docs and students that came from diverse backgrounds. “Some of my first postdocs had a thorough training in synthetic organic chemistry, much more so than I had. By working together, we were able to achieve something that neither of us on our own could have achieved.”

Sculpting materials from the finest matter

Sergei V. Kalinin is an architect of the most peculiar sort. His blueprints are atomic structures; his pencil an electron beam. Whereas other architects build cathedrals brick by brick, Kalinin aims to build nanomaterials, atom by atom. His tailored materials could form the groundwork for tomorrow’s microchips, transistors, quantum computers and medical devices. If successful, Kalinin’s advances promise to revolutionize human health, space flight and the computer-brain interface. “Science rarely develops along a straight trajectory,” says Kalinin, director of the Institute for Functional Imaging of Materials at the Oak Ridge National Laboratory. His contributions to scanning transmission electron microscopy and scanning probe microscopy, recognized with the 2018 Blavatnik National Award for Young Scientists, are no exception. Like many innovations, Kalinin’s craft came about serendipitously. His tools for building atomic-scale structures stem from a flaw in electron microscopy, a powerful method for observing a material’s crystal structure. Scientists have long known that the microscope’s electron beam can inadvertently jostle atoms out of position. In a 2015 paper in the journal Small, Kalinin and colleagues fashioned this flaw into a precise, powerful tool for sculpting atomic matter in 3-D. “The assumption was that if you see atoms, you will understand them. 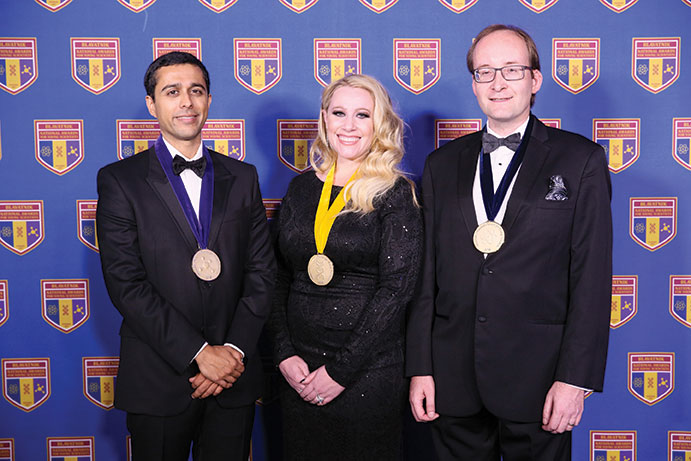 But that’s not enough,” he says. “You can image atoms, but the question is what can you learn from it? Eventually you need to read the blueprints of nature to understand how an atomic configuration achieves a certain functionality. Then you can learn how to make your own blueprints, and use electron beams to build your own configurations.” His interest in the field burgeoned three decades ago, when the scientific literature buzzed with papers describing scanning tunneling microscopy. In 1990, the renowned physicist Don Eigler used a scanning tunneling microscope to form individual atoms of xenon into the letters I-B-M. “That was essentially the beginning of nanotechnology,” Kalinin recalls. “In a sense, the fields of nanotechnology and quantum computing are predicated on the ability to put the atoms where we want them and to characterize the properties of these structures,” he says. “But even more, we need to control and shape the matter’s electronic properties, and find ways to combine these materials with existing semiconductor technologies.” To achieve those goals, Kalinin’s lab uses smart approaches — artificial intelligence, big data and machine learning — to understand how atoms can be positioned in a way that achieves a desired function. Working with Stephen Jesse, an expert in the real-time big data behind scanning probe and electron microcopy, Andy Lupini, an original inventor of aberration correctors in STEM, and Rama Vasudevan and Maxim Ziatdinov, experts in deep learning applications and physics extraction from atomically resolved data, they aim to design nanoscale and mesoscale materials for use in energy storage, information technology, medicine and other applications. “If we talk about grand ideas like exploring the solar system, we need to make devices and machines that are light, versatile and can interact with surrounding materials of any form and action,” he says. “To achieve that, you need to move from imaging to understanding to atomic-level control.”