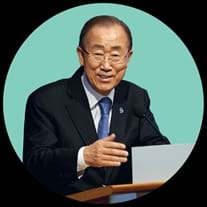 As Ban Ki-moon stepped up to a podium at the New York Academy of Sciences Summit on Science and Technology Enablement for the Sustainable Development Goals on November 29, he joked that back in school, science had never been his strong point. But as the UN Secretary General kicked off a day-long deep dive into how innovation could transform life for billions across the globe, Ban's admiration for those in the sciences was clearly evident. Indeed, he was there to ask scientists and representatives from industry, UN agencies, NGOs and intergovernmental organizations for their help in achieving the most ambitious to-do list ever created by humans for the sake of humankind—the United Nations Sustainable Development Goals (SDGs).

The Goals are a monumental undertaking, calling for unprecedented collaboration. To jump start the necessary teamwork, UN Deputy Secretary-General Jan Eliasson and Academy President Ellis Rubinstein came up with the idea to convene this first gathering of representatives from the science and technology communities at the Academy headquarters, in hopes of spurring action and innovation on behalf of the SDGs.

"The Academy has brought people together to address global issues since the beginning of our 200-year history," Rubinstein told the packed auditorium. "There is no task more global than the work of fulfilling the Sustainable Development Goals. We felt it right to host this important meeting." 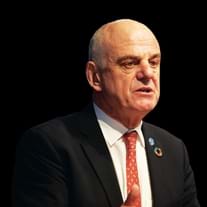 The SDG's are universal goals…and balance the three dimensions of sustainable development: the economic, social and environmental.

When extremist groups and politicians strive to push people into groups of 'us' and 'them', the scientific community is an example of problem-solving across lines that may otherwise divide us.

When the SDGs were adopted, UN officials realized it was crucial to "mobilize the scientists," Ban said, remarking on how that community has long paved the way for global transformation. "You aren't daunted by ambition, and you're quite at home with big goals and new ways of thinking," he told the Academy audience. Further, he noted that the common language of scientists is a powerful diplomatic asset in times when cooperation among nations is critical. History supports this assertion, as recently as 2015, when scientists aided in the negotiations that led to the Iran nuclear deal, and as far back as the famous U.S.–Soviet "handshake in space" in 1975, scientists have succeeded where others have struggled.

"When extremist groups and politicians strive to push people into groups of 'us' and 'them,' the scientific community is an example of problem-solving across lines that may otherwise divide us," Ban said. 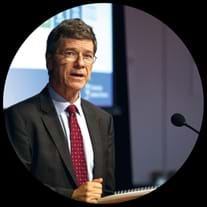 A crowd of over 100 VIPs filled the Academy's auditorium in lower Manhattan for the Academy Summit. Surrounded by panoramic views of one of the world's great cities, participants came together from the United Kingdom, China, Japan, Korea, India, Africa and states across the United States to join one of four working groups, or "streams" tasked with plotting a roadmap to advance the SDGs through science and technology.

To ensure the feasibility of these solutions, each group began by listing the key research and data gaps that must be filled in order to lay out a framework for achieving the SDGs, before brainstorming potential partnerships—particularly between the public and private sectors—required for financing, implementation and monitoring. They were then encouraged to discuss proofs of concept within their fields that could be brought to scale in service of the SDGs.

Throughout the day, speakers presented brief case studies of partnerships that are utilizing existing technologies in new ways in the fields of health, education, disease management and nutrition. Jeffrey Sachs, Special Advisor to the United Nations Secretary-General on the Sustainable Development Goals, offered particularly salient advice for tapping promising but underdeveloped technologies, and described how the progression from basic idea to mass uptake of a new technology is often stymied not by a lack of need, but by a lack of planning. "When extremist groups and politicians strive to push people into groups of 'us' and 'them,' the scientific community is an example of problem-solving across lines that may otherwise divide us," Ban said.

"We have to plan for the whole value chain, and that means planning for diffusion," he said, noting that the SDGs 15-year timeline calls for quick mobilization. "Otherwise, we have wonderful technologies sitting on the shelf, not deployed."

To help achieve the SDGs, the scientific community will be relied upon to think about innovations that can be globally implemented by the year 2030. Sachs reminded the groups of the seemingly impossible tasks humans have tackled throughout history. Recalling John F. Kennedy's famous "moonshot" remarks, Sachs said, "We didn't go to the moon because it was easy, we did it because it was hard. This too is hard, but it couldn't be more exciting."

More than 100 leaders from industry, academia, government and philanthropy participated in a series of discussions on how best to achieve the Sustainable Development Goals.

After a day of brainstorming, debate and discussion, the working groups presented their first set of recommendations to the Summit at large. Ideas ran the gamut, from rough sketches of how to use mobile apps to collect data on early childhood development interventions to suggestions for making cities more sustainable as well as more livable through technology. But a common thread emerged from all four groups: the desire to meet again, to continue the conversation and to collectively commit to the work ahead.

Many attendees echoed the sentiments of David Nabarro, UN Special Adviser on the 2030 Agenda for Sustainable Development and Climate Change, who described the Summit as a "landmark day" and hoped that the activism sparked would drive change over the next 15 years.

Along the way, "in every Goal, science has a role to play," said Jan Eliasson, UN Deputy Secretary-General, as he offered the Summit's closing remarks. He explained that even before the SDGs were finalized, the Science Advisory Board of the UN Secretary-General advocated an integrated, scientific approach to achieving them, noting the universality of science and its reliance on empirical facts as a force to broker the kind of global cooperation on which the SDGs depend. "To solve problems in real life, you need a cross-cutting approach that helps coalesce people around a problem—the scientific community has perfected that model," Eliasson said. Acknowledging the titanic scope of the SDGs and the dire circumstances of the people the Goals seek to aid, he emphasized the vast potential to create a brighter, healthier future. "The people in this room lift our hopes," he said. "The future depends on women, youth and science—these are the hope factors."