Out of the Lab and Onto the Market 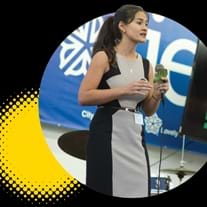 NYSERDA's mission is to identify next generation clean energy technology, and bring the best of those ideas out of the lab and into the marketplace through Proof of Concept Centers (POCC). POCCs work with research teams that have promising ideas, inventions and intellectual property. The teams gain access to business expertise that provides a market validation process to determine whether they are ready to create a viable business model.

Jeff Peterson, NYSERDA's Program Manager, sees this as a viable way to encourage new business start-ups. "Visualize a funnel. At the wide end of the funnel you have a lot of people with interesting ideas for prospective business enterprises. At the small end of the funnel you have a commercially viable scalable business," he said. "The POCC programs are designed to help entrepreneurs with ideas around clean energy technology negotiate the funnel to success."

Four years ago, NYSERDA selected three outstanding groups and awarded them funding to start POCCs: a Columbia University-led group that includes Cornell Tech, Stony Brook University and Brookhaven National Laboratory; a joint NYU and CUNY group; and High Tech Rochester, a nonprofit business incubator. The first two groups operate as a single POCC known as PowerBridgeNY (PBNY), while the High Tech Rochester POCC is called NEXUS-NY. The inclusion of NEXUS-NY helps cast an even wider net in the search for potentially game changing ideas. Although POCCs tend to focus on academic research Peterson said, "you hate to shut the door on people when they have an interesting idea, so that's where the NEXUS-NY program came into play."​

Research universities have always been at the center of new technologies and New York State has one of the most enviable networks of innovation centers in the country. POCCs have been centers of innovations for several years. Similar to PBNY and NEXUS-NY, their aim has been to fund groups with promising early-stage research and advice about how to develop their research for commercialization. All of these efforts support Governor Andrew M. Cuomo's energy goals to have 50 percent of the state's energy come from renewable resources by 2030.

"Unlike the NYSERDA POCCs, many of these centers promote a range of technologies rather than focusing specifically on clean energy. However, clean energy technology, as compared with software technology for example, is particularly poised to benefit from the POCC model," Peterson said. For one, it is relatively capital inefficient to build and test multiple iterations of complex clean energy hardware, such as a transformer or wind turbine, requiring both more upfront market research and funding. In addition, the market for clean energy technology is constantly evolving so it may be more difficult to project the demand for a certain type of product.

To date, 52 teams have participated in the first three cycles of the program. These teams have gone on to start nearly 30 companies between them, many of which have also attracted private investment as well as grant funding from competitive state and federal programs.

During their time in the POCC, the teams tap into myriad business resources that many academic groups and groups conducting early-stage research, find critical for commercialization. As part of the application process for PBNY, teams participate in a two-day boot camp, during which they hear about lessons learned from previous PBNY classes. They pitch their idea to a panel of judges from industry who provide guidance and feedback. Once teams are accepted into PBNY, they meet regularly with an assigned industry mentor, who helps them prepare to talk with potential customers, many of whom they connect with through PBNY networking events. In addition, the teams have monthly meetings with PBNY leadership to determine how well they are meeting the business and technical milestones they established at the beginning of the program.

The NEXUS-NY program involves two phases: In the first 12-week phase, teams make the case to the POCC leadership that their technology lends itself to creating a startup. If they advance, they spend the rest of the program working to demonstrate that their technology works in a way that is useful to potential customers, such as through building prototypes and developing investor presentations. Throughout the program, participants meet weekly with teaching teams, either virtually or in person, which help train them to have conversations with potential customers. The mentor network at NEXUS-NY is invaluable for introducing teams to key industry players.

Both NEXUS-NY and PBNY award research money to teams accepted into their program, but by the time they finish the program, teams usually say the most helpful part was everything else.

Christopher Schauerman, co-director of the Battery Prototyping Center at Rochester Institute of Technology, is part of a NEXUS-NY team that formed a company, called Cellec, for its technology, which involves using nanomaterials to build smaller and more energy dense batteries. The batteries have potential applications in drones and satellites and the Cellec team, which graduated last year, already has contracts lined up with customers in the aerospace and defense community. Schauerman said, "Through the NEXUS-NY program, we were able to talk to enough customers and get enough customer feedback that motivated us to form a company."

For some teams, feedback from potential investors led them to substantially pivot their plan. Tim Kernan, GM of Ironic Chemicals and his partners at Columbia University were accepted into the first cohort of PBNY with the plan to use their genetically engineered bacteria to convert solar energy to liquid fuel. The negative response from investors, who questioned the need for this technology because fuel was so cheap, combined with input from a PBNY business mentor, led the team to instead develop the bacteria to break down sulfide waste from copper mining.

"Academics are not always experienced or familiar with the commercialization process," Kernan said about the company he and his partners formed based on their technology. "Up until the existence of PBNY and similar types of centers, there was no support, you had to figure it out on your own or be lucky enough to have a technology that a company already wanted to buy. But with clean energy you're creating technology that doesn't have a market yet," Kernan said. Ironic Chemicals currently has a partner in the mining industry and a federal small business grant that will hopefully allow them to start testing bacterial tank reactors at a mining site by early 2018.

Another important component to the program is the advisory board organized by the Academy. National thought leaders from academia, government and industry meet regularly to provide strategic advice to the POCC leadership.

"After a relatively short time, there have been many interesting success stories. Many companies have been formed. Some have raised private capital. A few have sold products. Even more have been awarded additional grant funding," Peterson said. "The truly exciting part of the program, however, is that many of the research teams have become excited about entrepreneurship. NYSERDA committed to funding the POCCs for a five-year term. The hope is that the program will gain enough momentum and interest that grant and investment money will step in and NYSERDA and state funds would not be necessary at the scale they are at now."

More information about the POCC programs and their graduates can be found on the Academy website. Researchers can visit the websites of PowerbridgeNY and NEXUS-NY to learn more about applying.