In the 21st century, advances in science and technology drive much of the global economy, employing millions of people while causing fundamental shifts in the nature of work and the distribution of wealth. These changes have led many corporate leaders, academics and policy experts to warn of a widening “skills gap,” in which a lack of workers with the necessary training holds companies back and exacerbates inequity.

Traditional labor markets follow the law of supply and demand, where filling a position requires little more than offering adequate pay and benefits based on the number of workers able to do the job. When the employer pays the market price for a position, someone will take it. In some science and technology fields today, however, companies have trouble finding qualified employees at any price.

Policymakers and educators have offered blanket solutions for the problem, ranging from efforts to boost science, technology, engineering and math (STEM) classes in public schools, to retraining skilled adults looking to change fields. However, discussions with subject experts reveal that the reality of the skills gap is complex, and suffused with thorny geographic, economic and political challenges.

The U.S. unemployment rate, often cited as a major indicator of economic health, has been falling since 2010 and now hovers below four percent. Beneath that rosy figure hides a troubling reality, with huge swaths of the population in precarious, low-paying jobs. “The people at the bottom of the skills spectrum have experienced wage stagnation and lower mobility, while the people in high skill jobs have seen more job opportunities and ... great upward mobility,” says Marcela Escobari, Senior Fellow in Global Economy at the Brookings Institute in Washington, D.C.

The skills gap lies at the core of this bifurcation; educated, skilled workers, especially in science and technology fields, enjoy expanding opportunities and growing wages, while less-skilled individuals see their options narrowing and wages shrinking. Advances in automation promise to make the problem worse, as computers and robots replace mostly low-skilled workers. Geography also influences this trend, with most of the high-skill, high-paying jobs concentrated in a handful of major cities.

Drawing on large databases of employment and social trends, Escobari and her colleagues have identified the factors that could drive a more broad-based form of economic growth. Brookings is now producing a series of reports based on their findings, to help regions address not only the skills gap but the broader social and economic forces that exacerbate it. “For your low-wage workers to be able to take advantage of opportunities, [they need] affordable housing, accessible transport, [and] childcare,” says Escobari. Most important, “cities need thriving industries that create opportunities for upward mobility” adds Escobari.

Even with the basic services in place, training and re-training workers for fast-evolving businesses will require a major change in tactics. One recent survey found that the vast majority of CEOs say the skills gap is a big problem for them, but few have invested in training programs to address it.

Companies that do implement training programs often see their workers poached by competitors who didn’t have to make that investment. Escobari contrasts that with the situation in many European countries, where strong unions and labor regulations encourage companies to collaborate on training and building the pipeline of talent, “then even when people move from company to company, they all benefit from having more highly skilled and technically able people.”

With 44 percent of the American workforce now in low-wage jobs, the problem may be coming to a head. “People are thinking about this because we are seeing the repercussions not only in increased inequality, and financial precariousness of low wage workers, but also in the political sphere,” says Escobari. 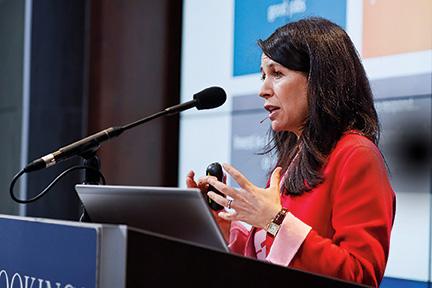 Brookings Center for Universal Education Senior Fellow Marcela Escobari presents her May 2019 report “Growing Cities that Work for All: A Capability-based Approach to Regional Economic Development” at the 2019 Building the Workforce of the Future: Resilient People and Places symposium. Photo: Brookings

That anger is likely to get worse when the current economic boom reaches its inevitable end. “It’s sort of the calm before the storm, because you have high employment, [but] as in any economic cycle, when that starts to go down you’re going to see a major transformation,” says Art Langer, director of the Columbia University Center for Technology Management in New York, N.Y. Langer, who also founded the job training nonprofit Workforce Opportunity Services (WOS), has been working on multiple fronts to close the skills gap.

Traditionally, students interested in science and technology have been encouraged to get college degrees rather than vocational certifications, but that’s now leaving some industries shorthanded. “You have advanced manufacturing that is using all different types of scientific and computerized equipment, and there are huge skills gaps there,” says Langer. Meanwhile, the best-trained white collar workers gravitate to trendy high-tech companies such as Google and Facebook, leaving insurers, banks and other traditional businesses short of skilled labor as they try to adopt more sophisticated technologies.

The irony of these skills gaps is that Americans are attending college in record numbers, and racking up massive debts to do so. Many graduate with degrees that haven’t prepared them for the jobs that are available.

While many educators and policymakers focus on public schools and state universities to address the skills gaps, Langer doesn’t have much hope for that approach. “Public institutions of higher education [are] controlled by political forces,” says Langer, adding that changes in legislatures and governorships often jerk policies and funding in different directions every few years. “This concept that somehow these institutions ... are going to change themselves is a dream,” he says.

Instead, Langer advocates transforming the relationship between employers and job training programs. WOS, for example, works directly with companies to identify the skills they need, then finds and trains people for those positions. By focusing on underserved job seekers, including minorities, women and veterans, WOS is able to recruit eager, talented individuals who would otherwise be left out of highly skilled jobs. As that and other collaborative job training programs take off, Langer hopes more traditional educational institutions will adopt similar approaches.

The Gospel According to the Peter Principle

Some major universities are already working to boost their vocational training programs, especially online. “Our focus is primarily on providing online certificate programs that are really focused on the working professionals [and] online professional development,” says Mark Dembo, director of corporate programs at Cornell University’s eCornell in Ithaca, N.Y. Dembo explains that eCornell works closely with major employers to determine industries’ current needs, and tailors programs to meet those needs.

That perspective reveals two major types of skills gaps. First, companies need increasing numbers of technically trained people to take on entry-level positions, especially jobs requiring data analysis and computer programming capabilities. The second gap, which has received less publicity, comes after those employees have advanced in their fields for a few years. “What we hear quite often is ‘we’ve got people that have very strong technical backgrounds, [but] now I need them to lead teams,’” says Dembo, adding that many companies have “people that are strong technically, and then they get to a point of failure because they don’t have those softer skills” required to manage people.

In particular, Dembo distinguishes between leadership and management skills. The former refers to the ability to influence people and unify teams around common goals, while the latter entails an understanding of budgeting, administration and group organization. To meet the growing need, eCornell and other online universities now offer programs to teach both. Conversely, Dembo says he also hears from established managers who need more technical training to be able to understand what their subordinates are doing.

The rising need for continuing education underscores another major trend in the labor market; companies want to hire lifelong learners. “In today’s world you’re going to have to continue to adapt because the needs are going to change, of what’s needed in the labor market,” says Dembo. Faculty will also need to adapt, keeping ahead of trends in employers’ needs so they can continue teaching relevant knowledge and skills to their students.

With student loan debt in the U.S. now ballooning past $1.5 trillion, employers’ demand for lifelong learners is taking a heavy toll on their future and present employees. Though he declines to comment on the student loan issue, Dembo urges people to take careful stock of their skills and finances, and consider the return they expect to get from their educational investments.

Gaps in the Clouds

The ways technology firms respond to the skills gap reflect their unique needs, as well as a less appreciated aspect of the problem: geography. Companies outside major cities have been hit especially hard. “We ... consistently have to go outside of our area and outside of our state to source sufficient talent, credentials, experiences and diversity,” says Bill Avey, global head of personal systems services at Hewlett-Packard in Boise, Idaho.

As a major employer in Boise and a leading manufacturer of personal computers, HP faces an ongoing struggle to find and develop the skilled workers they need. The problem extends across the educational spectrum. Almost half of Idaho children need remedial education as early as kindergarten to meet minimum standards, and many fail to thrive academically in later years. In response, Avey and leaders in other local companies have banded together to lobby Idaho’s deeply conservative politicians for solutions.

“Business leaders are the one group of folks that can credibly show up in the legislature and say ... something as crazy as ‘we suggest you raise our taxes to spend more on education’” says Avey, adding that “it’s very different than a teacher’s union showing up.”

Boosting education budgets is only a partial solution, though. Even for companies in major metropolitan areas with access to top university graduates, science and technology businesses are changing and growing so fast that demand for skills vastly outstrips supply. “The country produces about 60,000 computer scientists every year, whereas we’re seeing more than 700,000 technology jobs open,” says Obed Louissaint, vice president of talent at IBM in Armonk, N.Y.

The drastic expansion of artificial intelligence technology is one of the biggest drivers of the skill gap. Previously the domain of a handful of high-tech companies, AI is now considered indispensable in numerous industries. “We have financial services firms, retailers and insurance companies who are all looking for people with AI skills or data science capability, (which) puts a strain on the available talent,” says Louissaint.

IBM is attacking the problem aggressively, with multiple initiatives to retrain many of the same groups targeted by Langer’s team: blue collar workers, veterans and women, who the company then places in rapidly expanding fields. Like others confronting the skills gap, Louissaint also emphasizes the need for workers to change their perspectives on education and training: “They should be thinking of learning … as a continuous journey.”