There Are Women in Science, the Challenge Is Keeping Them There

Efforts to close the gender gap in STEM by encouraging girls to study science in school have resulted in more young women considering a career in science, yet systemic biases in academia create an uncertain future for their careers. Many women who earn PhDs in life sciences choose to pursue non-academic careers during the critical period between receiving their doctoral degree and becoming an independent investigator. This gender specific phenomenon, described as a “leaky pipeline,” is a significant source of brain drain for academic and biomedical research.

Overt bias against women in the sciences is less common today than in decades past, but implicit bias remains a major challenge for male and female scientists alike.

According to Virginia Valian, distinguished professor at Hunter College and CUNY Graduate Center and director of the Hunter College Gender Equity Project, bias, whether conscious or not, shapes attitudes and behavior. “The traits that are perceived to be better for science are those we often ascribe to men, such as independence and a focus on the task at hand, while women are nurturant, communal and express their feelings,” Valian said. “These gender schemas can impact reality, such that women’s achievements are systematically slightly under-acknowledged and men’s are slightly over-acknowledged.”

A slew of research studies examining the impact of implicit bias on hiring decisions and career advancement, conference presentations, manuscript authorship and grant funding, confirm Valian’s assertion. For example, in a 2012 study from Yale University, 100 male and female faculty members at top research institutions reviewed an identical resume for a hypothetical lab position with one change — the applicant was either a man or a woman. The resume bearing a man’s name was favored over the same resume with a woman’s name. Male candidates were perceived as more competent and offered higher salaries, while female candidates were rated as more likeable.

Navigating the transition from graduate school or postdoctoral researcher to independent investigator hinges largely on funding, and this too is an area rife with inequalities. While women receive grants from the National Institutes of Health (NIH) at about the same rate as their male peers, first-time female PIs are funded at comparatively lower levels. A further consequence of implicit bias is that female professors do more of the service work within departments — taking on additional teaching responsibilities and serving on committees. While this work is essential, it does not support the attainment of federal and foundation grant funding needed to advance to academic leadership positions, nor is it valued during tenure review.

The difficulties of juggling career and family demands have especially stark repercussions in the scientific workforce. A surprising 43 percent of women scientists — and nearly 25 percent of men — transition to part-time employment or leave their careers altogether after having their first child, according to Cech & Blair-Loy’s 2019 study of the impact of parenthood on STEM careers. In response, some institutions have implemented policies to address retention of both women and men. “Having children should not be a permanent impediment to advancement,” said Ann Taylor, MD, vice dean of academic affairs at the Columbia University Vagelos College of Physicians and Surgeons. “Yet when women lessen their workload to accommodate their family responsibilities, we don’t do a good job putting them back on the path to leadership.”

...without men at the table, institutional change will not happen.

Taylor believes that gender-neutral policies at Columbia, such as 13 weeks of paid leave for primary caregivers and an extra year on the tenure clock for each child, “really help support careers,” but acknowledges that some difficulties are harder to address. Grant funds often come with strict timelines, posing challenges for women and men who temporarily trim their work responsibilities during the early years of family life. “You don’t have the luxury of saying, ‘I’m going to take this three-year grant and make it a six-year grant,’” Taylor said. “These are problems we have to solve, and we are actively thinking about how to do that.”

Creating the systemic, institutional change that Taylor and others envision requires support from male STEM professionals as well. Neuroscientist Paul Greengard — who was Vincent Astor Professor at The Rockefeller University until his death last year — was an early advocate for gender equality in academia. “There’s absolutely no evidence one way or another as to whether there’s a difference between the sexes in terms of creativity, the most important parameter of scientific discovery,” Greengard said in an interview with The Rockefeller University in 2016. When he won the Nobel Prize in 2000, Greengard donated his share of the honorarium to establish the preeminent annual prize for women in science — The Pearl Meister Greengard Prize. Named for Dr. Greengard’s mother, the prize sparked a robust program of advocacy and fundraising to support women scientists at Rockefeller. Aaron Mertz, director of the Aspen Institute Science & Society Program and a former postdoctoral fellow at Rockefeller, served as the vice president of the professional development group WISeR (Women in Science at Rockefeller). “Men must be active contributors to discussions about gender equality, and have a significant role in creating a scientific environment in which women can flourish,” he said. “I firmly believe that women’s issues are men’s issues.” Without men at the table, institutional change will not happen. 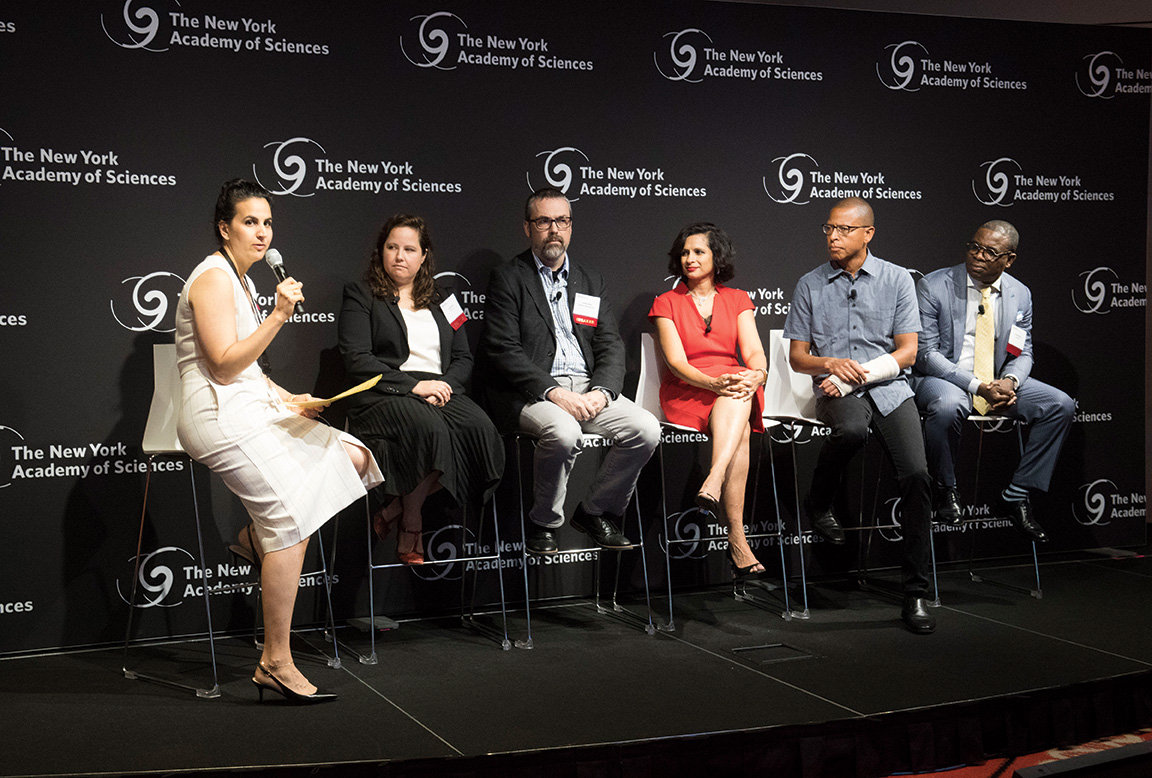 The New York Academy of Sciences is committed to a diverse balance of program speakers.

A culture of mentoring is vital in business — including guidance on salary negotiation, self-promotion and other skills necessary to advance in competitive fields — yet this type of support is a relative newcomer to academia. For early and mid-career women scientists, direction from senior colleagues can mean the difference between choosing an alternative career path and advancing to leadership positions. Critically, Taylor highlighted that “the nature of mentorship can vary. Women are more likely to have mentorship that involves psychosocial support and are not provided with tactical career development strategies.” Columbia recently augmented their leadership and management programs to address the needs of women and diverse faculty by making both types of mentoring available for all faculty members, along with initiatives to ensure salary parity and timely promotions.

Men have so outnumbered women in scientific conference programs that a new word — manels — to describe all-male panels has entered the scientific lexicon. Feminist and activist Marie Wilson popularized the notion “if you can’t see it, you can’t be it” to encourage women’s leadership as role models. To raise the visibility of women scientists, the New York Academy of Sciences requires gender parity among conference speakers. Forty-five percent of the speakers in the Academy’s 2018-2019 programming cycle were women, with an organizational goal of reaching 50 percent in the coming year.

Recently, NIH director Francis Collins released a statement indicating that he would decline participation at scientific conferences where “inclusiveness was not evident in the agenda,” writing that these parameters should include women and underrepresented groups. Conference organizers striving to meet that mandate may turn to Request a Woman Scientist, a database created by the 500 Women Scientists initiative — an organization galvanizing public support for STEM diversity and equality. In less than one year, more than 9,000 women scientists from 133 countries have added their profiles.

A 2018 paper by Lerchenmueller & Sorenson of the Yale School of Management noted that, “Rather than women dripping out of the STEM career pipe every centimeter along the way, they appear to pour out at one of the critical junctures.” This metaphor suggests that the first step to gender equality is raising awareness of the pressure points in women scientists’ careers such as the transition between trainee and independent investigator. The path forward will require collective action between universities, government agencies and funders to remove systemic barriers and biases. Momentum is building for those willing to make the effort. As Taylor emphasized, “Equity and justice is work every single day.”