From local education systems to the United Nations' Sustainable Development Goals, engaging a variety of stakeholders in a common goal can yield incredible results.

In Cincinnati, Ohio, something unprecedented is happening in the schools: all of them are improving! Consider that 91 percent of student outcome indicators are improving for students in Cincinnati, and that this is happening across grade levels, from pre-kindergarten all the way up to 12th grade. The results over the past few years have been so astonishing, that in the U.S., 64 community partnerships in 32 states have joined the StriveTogether Cradle to Career Network to learn how to replicate this success. Knowing how challenging school reform is in your city, are you wondering: How is this possible? The answer: collective action.

Before explaining the meaning of this phrase in the Cincinnati context, allow me to touch on surely the most hopeful sign in a hope-challenged world: the amazing level of success of the United Nations Millennium Development Goals. When every country on the planet voted in 2000 to undertake the grandest of global challenges—to reduce extreme poverty by 50 percent, to achieve universal primary education, to reduce child mortality by two-thirds, as well as five more equally ambitious goals—no one actually believed this was possible by the end-date of 2015. Indeed, hardly anyone paid attention to the pronouncement because there was no mechanism to even imagine such outcomes, forget about achieving them. But over the next decade, an unprecedented public–private partnership formed, both formally and informally. And late last year, the results were announced and the world learned that the impossible had become not merely possible but was nearly achieved.

Some examples: both extreme poverty and child mortality fell by 50 percent, enrollment in primary education in developed regions rose to 91%, new HIV infections decreased by 40 percent, maternal mortality decreased by 45 percent, and 2.6 billion people gained access to clean drinking water. In fact, the successes were so striking, even if some fell short of the goals, that every nation upped the ante by announcing an even grander set of "Sustainable Development Goals" to be met by 2030.

"Can our Academy and its extraordinary Members go beyond even our proudest accomplishment and — by acting collectively — make a transformative contribution to a world that needs us?"

What was at the core of this success? I mentioned public-private partnerships at an unprecedented scale, but underlying and fueling these "PPPs" was collective action.

If you haven't happened to follow the literature on collective action, I would recommend one article: "Collective Impact" by John Kania and Mark Kramer, published in the Stanford Social Innovation Review (Winter 2011 issue). But the 4 keys to success can be signified by 4 words: "storming, norming, conforming, and performing." What they represent are the crucial elements in the life cycle of progressing in the face of daunting challenges:

(1) Storming: convening every single one of the stakeholders in achieving progress whether they get along with one another or not (e.,g., in Cincinnati they convinced the unions to sit down with the administrators, the corporate leaders, the parents, and so on);

(2) Norming: establishing a detailed consensus on what everyone's ideal goals would consist of (improving the outcomes for every child in every school in the entire city);

(3) Conforming: presenting a plan that every stakeholder would not only buy into but that they would be willing to individually contribute to (in Cincinnati, scores of multi-stakeholder watchdog committees took on voluntary assignments to oversee the performance of every single school in the city and to work with families if individual children were having trouble); and

(4) Performing (well, that's what has now been working so well over the past few years).

I hope you find these anecdotes as inspiring as I do. But inspiration leads to the big question for me and for you: Can our Academy and its extraordinary Members go beyond even our proudest accomplishment and—by acting collectively—make a transformative contribution to a world that needs us? 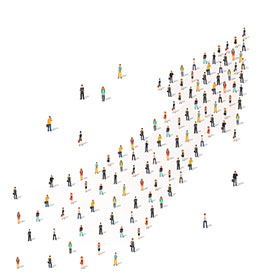 In this issue, we devote many articles to the topic of (as I would phrase it) "Membership in the New York Academy of Sciences: What Does It Mean & What Can It Mean?" As you peruse the issue, you will encounter examples of Members who volunteer to mentor children even though they have won the world's most prestigious prizes and are working 24/7 to drive their science to new heights. And you will meet young scientists who are engaging their peers across geographies and cultures, working collaboratively on innovation projects.

What all of these Members have in common is that they are not passive Members of the New York Academy of Sciences, but they are engaged Members: people giving back. When people new to our Academy ask: How is it possible that the Academy, with a mere 100 staffers, organizes 125 meetings a year, publishes a high-impact journal, oversees a global alliance on nutrition science, takes a leading role in Alzheimer's, initiates a "Global Compact on Early Childhood Development," manages a "Nobel Prize" for young scientists, and launches the world's most ambitious effort to inspire and educate children in STEM careers, I can say that it is because of our incredible network. It's not just names on paper; thousands of you participate in these activities.

So can we take your passions and efforts to the next level: collective action? On Wednesday, January 13, United Nations Secretary General Ban Ki-moon invited me to a private lunch. He wanted to know whether our Academy would be willing to actively support the Sustainable Development Goals. This is a great honor to you, the Members of our network. It means the Secretary General thinks you are the greatest collective of innovators on the planet. He looks at the lists of Governors, President's Council Members, and Blavatnik Award winners and finalists, and then he looks at the academic and industry experts on the committees of our conferences, Discussion Groups, Sackler Institute, and initiatives in Alzheimer's Disease, smart & sustainable cities, early childhood development, and even the young geniuses in our new Junior Academy and 1000 Girls, 1000 Futures social networks, and he is convinced that if all of us act collectively, we can make an enormously positive impact on the UN's drive for a sustainable planet.

If you agree and would like to help, drop me a line.