When Japanese physicist Kumiko Hayashi of Tohoku University and neuroscientist Ephraim Trakhtenberg of the University of Connecticut met at the New York Academy of Sciences this year, the synergies between their work weren't immediately obvious. The two scientists were paired together as part of the Interstellar Initiative, a joint project of the Academy and the Japan Agency for Medical Research and Development (AMED), which grouped 50 early-career scientists from around the world for interdisciplinary research projects. "The biggest global challenges, whether in health, the environment, or energy, require scientists with different expertise to work together," said Academy President & CEO Ellis Rubinstein. "The Interstellar Initiative brings together brilliant young scientists who would likely never cross paths, and supports them as they develop solutions to major health issues."

Hayashi and Trakhtenberg are devising new therapies to restore neuronal function following injury. As human cells mature, their ability to replicate is severely reduced. This phenomenon is especially prevalent in the brain, where the creation of new neurons exists only at very low levels in adulthood, and Trakhtenberg's work suggests that motor proteins may be involved in this loss. "If we can understand the dynamics of these proteins, we may be able to reverse the process," he said. Over the past several years, Hayashi developed novel algorithms that can be applied to motor protein measurement and analysis. "I don't know much about neuroscience," she said, "but it turns out that my algorithms can illuminate some mechanisms of the brain." 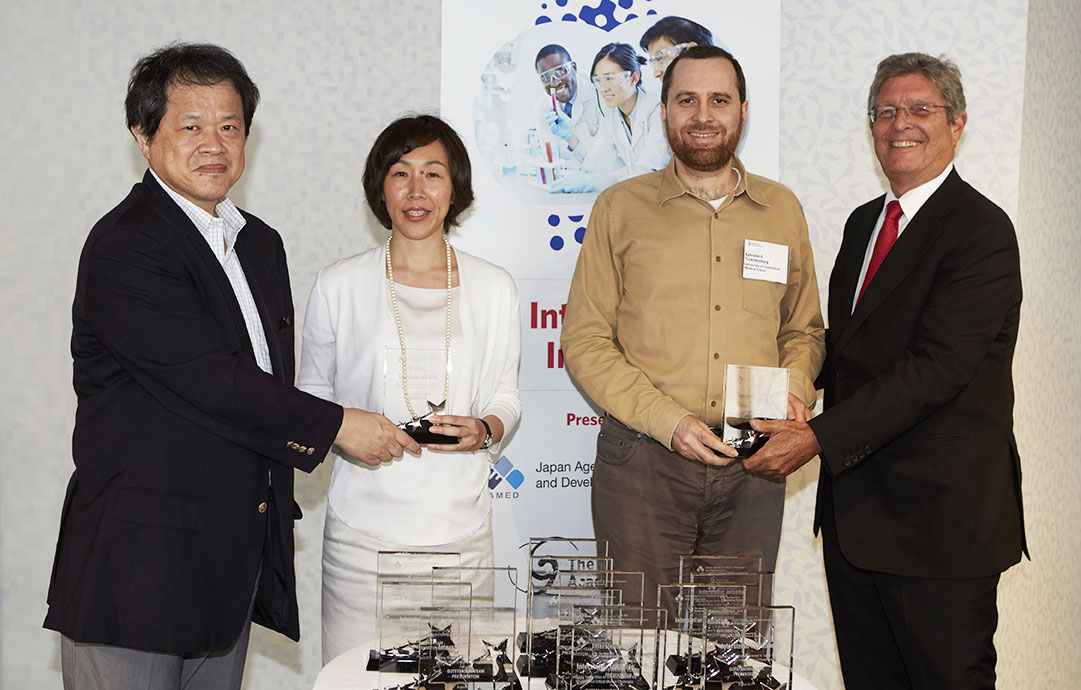 From left to right: President Suematsu, Japan Agency for Medical Research and Development (AMED), recognizes the collaborative work of Japanese physicist Kumiko Hayashi, Tohoku University and neuroscientist Ephraim Trakhtenberg, University of Connecticut, along with Ellis Rubinstein, President and CEO, New York Academy of Sciences at the recent Interstellar Initiative workshop presented by AMED and the Academy.

This teamwork is precisely what AMED president Makoto Suematsu envisioned creating through the Interstellar Initiative, part of a broader strategy to bring international partnerships and new funding streams to Japan's R & D pipeline. As technological advances that enable data sharing and ease remote collaboration have become ubiquitous, Suematsu believes it is crucial for Japanese researchers to join global research efforts. "International collaboration is critical in many fields," Suematsu said. "From infectious disease outbreaks to cancer treatment and drug development, we can accomplish much more when we reach out, shake hands and collaborate."

Another Interstellar Initiative team, comprised of NYU biologist Carlos Carmona-Fontaine, oncologist Valerie Chew of Singapore Health Services and physicist Shuichi Shimma of Osaka University, is juggling large time differences and global transport of perishable patient samples as they pursue their project. Blending Chew's expertise in oncology with Carmona-Fontaine's efforts to understand the role of metabolites in cancer cells and Shimma's imaging techniques, the group is uncovering the interplay of metabolite activity and immune changes in tumor cells. Noting that the Interstellar Initiative breaks down barriers that inhibit cross-disciplinary partnerships, Carmona-Fontaine commented that scientists "usually stick to our own communities, and there's often a disconnect between scientists from different parts of the world — yet there are many advantages to learning different ways to look at a similar problem." Chew was thrilled to be paired with teammates who brought both new expertise and new technologies. "If you're working in your own zone, you'll do what's familiar," she said. "But bringing together different disciplines and technologies creates a novel, creative environment for solving problems."

Proposals devised by Interstellar Initiative teams will be submitted to international funding agencies. For physician and biologist Deepak Lamba and biologist Akira Satoh, such funding may help them realize applications for their research. Lamba, who is developing methods for using stem cells to repair retinal tissue, is working with Satoh, whose research is illuminating the regenerative pathways of amphibians. They are probing the factors that influence regenerative capabilities in mammalian and amphibious cells, with the hope of developing methods of repairing and regenerating damaged tissue. "[Stem cell research is] moving so quickly that I think we'll start seeing applications in the not-so-distant future," Lamba said. Satoh noted that stem cell research is less popular among Japanese scientists, while Lamba added that few labs in the US are using amphibians to study regenerative pathways. "We would never have done this on our own — it's a unique challenge for us to do together."

Rubinstein is quick to highlight that this is just the beginning for the Interstellar Initiative. "This is only our first cohort, and there's so much exciting research in the works already," he said.

Applications are now being accepted for the 2018 Interstellar Initiative, which will be held from June 22 – 23, 2018 in New York City. To learn more about the program requirements, click here – application deadline is April 2, 2018.