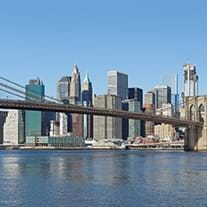 Small companies throughout New York State are bringing bold, transformative technologies from the lab into the world thanks to support from the New York State Energy Research and Development Authority (NYSERDA). Together with the New York Academy of Sciences, NYSERDA is supporting visionary early-stage startups through proof-of-concept centers that foster the growth and development of clean tech businesses. The two centers, PowerBridgeNY and Nexus-NY, have provided critical financial support, mentorship, and guidance for dozens of startups that are shaping the future of clean energy. Two companies, Allied Microbiota and Dimensional Energy, are tackling waste remediation and reuse with novel techniques that are being tested and proven today.

Amid some of the most expensive real estate in the world, on the waterfronts of Manhattan and Brooklyn, lay the remnants of disaster. The waters of the East River, Newtown Creek and the Gowanus Canal are among the local sites where benzene and oil residues mingle with persistent pollutants, such as polychlorinated biphenyls (PCBs), to form a stubbornly toxic soup that resists remediation. For environmental microbiologist Ray Sambrotto, Lamont Associate Professor at the Lamont–Doherty Earth Observatory at Columbia University, the solution for cleaning up such sites may be as simple as a common soil bacterium isolated from a compost pile in the 1990s. 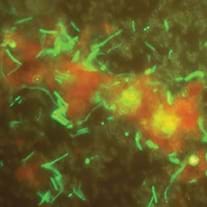 Allied Microbiota, the company Sambrotto and a cohort of Columbia colleagues founded in 2017, is commercializing the use of this bacterial strain, aiming to reclaim polluted areas by simply allowing the microbes to do what they do best: break down environmental contaminants. The scientific community has long been aware that common microbes can degrade some pollutants — indeed, dozens of bacterial species are credited with dispatching of much of the oil dumped into the Gulf of Mexico during the Deepwater Horizon explosion. The class of contaminants that includes PCBs, polyaromatic hydrocarbons and dioxins are less susceptible to natural attenuation, however, and these so-called recalcitrant pollutants require expensive, logistically challenging remediation techniques. "The idea of using bacteria for bioremediation of recalcitrant pollutants isn't a new one," said Sambrotto, noting that research interest has waxed and waned over several decades. As advances in biotechnology have moved into the environmental field, the notion of deploying nature's soldiers against a decidedly unnatural group of pollutants has gained momentum.

Sambrotto and his Allied Microbiota co-founder Frana James describe their approach as "augmentation," as it uses specialized bacteria to amplify the work of native microbes, a process they believe can be done safely and at low cost. "Our bacteria are thermophiles, and they only reproduce when conditions are ideal," Sambrotto said, adding that if temperatures drop below 40 degrees Celsius, the bacteria enter a dormant state. When active, they are powerhouses of bioremediation, eliminating recalcitrant pollutants at breakneck speeds relative to other bacterial breakdown methods. Sambrotto credits this speed to the fact that the microbes are aerobic, rather than anaerobic, like most strains used in remediation. "Aerobic enzymes have much more rapid degradation rates," he said. "Oxygen is just a better hammer to hit these things with."

With support from PowerBridgeNY, a proof-of-concept center that commercializes cleantech spinning out of universities, Sambrotto and James are pilot testing their technique on polluted soil and sediment samples from the Hudson River and other sites. "People are more than happy to send us samples, and they're especially interested in hearing about the speed of remediation, as that's what drives costs," he said. Experiments on samples containing a mix of PCBs and chlorobenzene reveal breakdown rates of 25–40 percent per day under optimal conditions, versus 1 percent with anaerobic bioremediation. "When we hit that sweet spot to maintain optimum growth of the organism, breakdown rates are orders of magnitude faster than anything we've seen," said Sambrotto.

While more pilot tests are needed — and the company is on the lookout for such projects — the promising early results have inspired the team to think about the future. Sambrotto described his vision of eliminating the financial barriers to remediating desirable but toxic spots along the Hudson River and restoring their utility. "Hopefully, we can bring the cost down enough to address these areas," he said. "Rather than digging up sediments and moving them elsewhere for treatment, I can envision a portable system that allows us to bring bacteria to the site and treat it right there. It's incredible to think that we could reclaim properties that have been fallow for decades."

Most people don't often think about combustion — the fundamental chemical reaction that converts a fuel source into energy, leaving water and carbon dioxide as waste products. Jason Salfi is the opposite. As CEO and co-founder of Dimensional Energy, along with David Erickson, Tobias Hanrath and Clayton Poppe, he spends his days talking about ways to reverse combustion, which may sound like a tall order, "but it's what plants do all the time," Salfi said, describing the process his company is working to commercialize: a form of artificial photosynthesis that uses sunlight, water and waste carbon dioxide to create fuel.

Dimensional Energy was born from serendipity, when Erickson and Hanrath, two faculty scientists from Cornell University, unknowingly submitted complimentary applications to NEXUS-NY, a clean energy business accelerator for which Salfi serves as an advisor. Noting the ties between the professors' technologies, which tapped sunlight and catalytic materials to convert waste carbon dioxide (CO2) into hydrocarbon fuels, the NEXUS-NY team played matchmaker, suggesting the two join forces with Salfi to form a company.

Since 2016, the team has refined their core technology and begun laying plans for an industrial partnership to test their capabilities at increasingly larger scales. Although the technology is still in its early stages, the team envisions a scalable reactor that uses sunlight as an energy source, along with novel nanocatalysts and fiber optic waveguides developed in Hanrath and Erickson's labs, to convert waste CO2 into methanol or syngas for use in a broad range of industrial processes. "We're not just sequestering carbon dioxide, we're creating something useful," said Erickson. 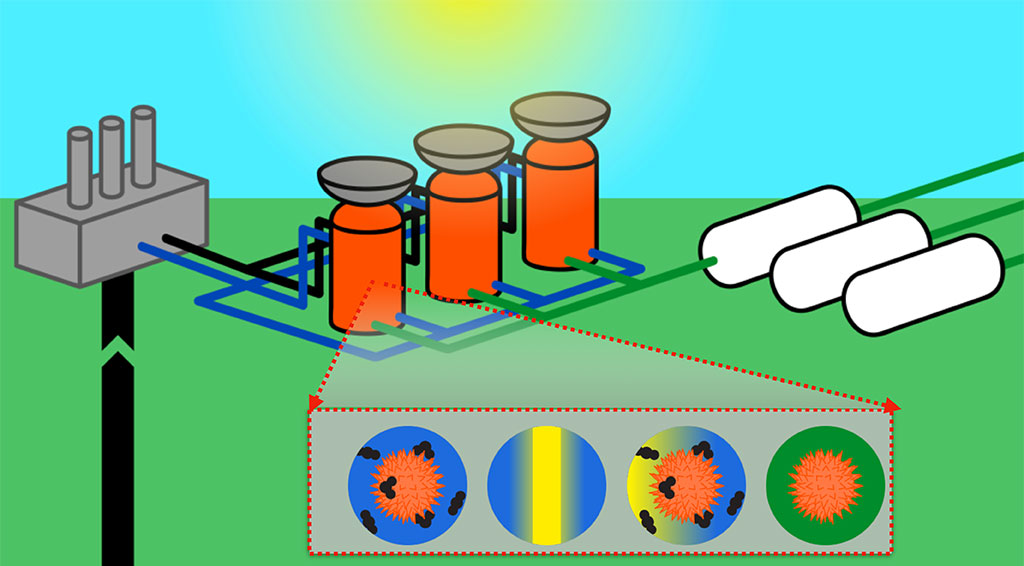 The Dimensional Energy technology is "plug-in" compatible with established carbon capture systems. The schematic illustrates how waveguide and catalyst concepts are integrated to enhance light exposure to the surface of nanostructured catalysts.

As a semi-finalist in the Carbon X-PRIZE, a $20 million competition accelerating the development of carbon conversion technologies, the Dimensional Energy team is testing the feasibility of situating their reactor at point sources of CO2 emissions, such as natural gas or coal-fired power plants, although Salfi says such co-location isn't crucial for the system to be successful at scale. "Ultimately, it's up to the industrial customer whether we capture the carbon on site or use sequestered carbon," he said. "For now, we're just aiming to create a reactor that fits within the current industrial infrastructure, with a few novel modifications."

This level of attention to design schemes that work well in industrial settings is a distinguishing factor of Dimensional Energy's approach to tackling what is, by all measures, a challenging end goal. Carbon conversion technologies are viewed as a critical component of efforts to rebalance the carbon landscape, but the field is still relatively new and most technologies are early-stage. At present, the cost of sequestering and transporting CO2 makes many potential applications cost-prohibitive at scale, and new sequestration technologies, including those that capture CO2 directly from the air, are not fully commercialized. Erickson believes the company's pragmatic approach to design and functionality will ease the process toward scalability. "We're pursuing traditional methods of building small prototypes and learning how to optimize and grow," said Erickson, "But since day one we have looked at major chemical plants to understand what works in that setting, and we've modeled our reactors on proven designs that we know can scale."

Salfi and his team are realistic about the timeline for carbon conversion to have a measurable impact — easily 30 years by many estimates — but they, like most others working in the renewable energy field, are undeterred by the long time horizon. "This is hard work, and I can tell you that there are easier ways to make money," Salfi said. "But there are so many pioneers and passionate people excited to build businesses around these technologies, and our mission to make a difference drives what we're doing and how we approach the challenges we face.