An introduction to New York's newest role: that of an undisputed scientific powerhouse.

Come, New York has long beckoned: come achieve your dreams and create what has never existed before—come build America's first department store and largest stock exchange, her first pizzeria and first public brewery. Come make New York City the nation's capital of finance and media and fashion, and come invent the inventions that change the way we live (air conditioning, toilet paper), the way we remember (photographic film), and the way we sing (folk rock). Come immerse yourself in neighborhoods filled with other artists and writers and thinkers who will nurture and challenge your ideas, producing the critical mass that will enable you to achieve what you cannot in isolation. Come change the way an entire nation thinks, as when the abolition movement put down roots in Rochester in the mid-1800s. 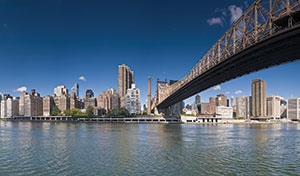 Even as New York City and State have called the world's doers and dreamers to their shores for centuries, scientists became almost an afterthought by the mid-20th century. Yes, Nikola Tesla did pioneering experiments on alternating current in lower Manhattan during the Golden Era for New York science in the late 19th century; biologists at The Rockefeller University discovered in the 1940s that DNA is the molecule of heredity; and physicists using particle accelerators at Brookhaven National Lab on Long Island in the 1960s, 1970s, and 1980s discovered some of the basic building blocks of the universe and the magical rules that govern them.

But by the post-war era, science and technology had become less central to the life, commerce, and the very identity of New York than the rising commercial behemoths of advertising, finance, law, and business.

Now, New York is exulting in a science renaissance. You can measure it in glass and steel, like the $350 million Advanced Science Research Center that The City University of New York is building on St. Nicholas Park in Upper Manhattan and which, when it is completed next year, will house scientists whose work will be driven by a revolutionary new way of organizing research. You can measure it in bold new collaborations, such as the New York Structural Biology Center in Harlem or the $50 million New York Genome Center in SoHo, both of which attract researchers from around the country and around the world.

You can measure it in the ways that long-established institutions are expanding their research footprint: in West Harlem, Columbia University is building an entirely new campus, allowing it to increase the size of its engineering faculty by 50%. "Never before in our city's history has there been ... so much scientific investment," said then-Mayor Michael Bloomberg in his 2013 State of the City address.

And you can measure it in the ways that New York is hanging up "Science Wanted" signs, such as its offer of land on Roosevelt Island and up to $100 million to induce world-class institutions to build a state-of-the-art applied sciences and engineering campus. Welcome, Cornell Tech, a collaboration between the Ithaca, NY, university and Technion-Israel Institute of Technology, which has been hailed as "the most exciting economic development project our city has ever undertaken."

Only a decade ago, New York, the city as well as the state, were behind other regions with relatively well educated populations and leading universities in attracting scientists and research funding. That began to change when Bloomberg vowed that the city would rise from the ashes of the 9/11 attacks with a more diversified economy, one in which science would take its rightful place alongside other creative, forward-looking fields. The city's "ultimate goal," Bloomberg said in a 2009 speech, is "reclaiming our title as the world's capital of technological innovation."

Just as Wall Streeters and Mad Men, as well as denizens of the diamond and garment districts, draw much of their energy and hone their competitive instincts from sheer proximity to one another in the neighborhoods where they cluster, so too have scientists formed a critical mass in New York, both upstate and downstate.

New York City is home to more students than any other city in the country. Attracted by the city's dynamism and culture, to say nothing of the access to capital, ideas, and the growing presence of others like them, young people are streaming into New York to study, to invent, and to start technology companies; welcome, Silicon Alley. For sheer creative and intellectual energy, Paris in the 1920s has nothing on New York City in the 2010s.

In Upper Manhattan, CUNY's Advanced Science Research Center will be welcomed to the neighborhood by the five-year-old CUNY Energy Institute, the new CUNY Hub for Innovation and Entrepreneurship, and a new City College science building. A subway ride away is Columbia University's new Mortimer B. Zuckerman Mind Brain Behavior Institute.

Continue downtown to the three-year-old Alexandria Center for Life Science on the East River, which has already drawn such tenants as Kadmon Pharmaceuticals, ImClone Systems, and Pfizer's Centers for Therapeutic Innovation, and has spawned dozens of life sciences startups. With NYU Langone School of Medicine and Bellevue Hospital close by, Midtown East is as dense with biologists and physicianscientists as 6th Avenue in the 20s is with wholesale florists.

Global organizations that could have chosen headquarters in Beijing, Boston, Baltimore, or anyplace else with an abundance of science talent are lately choosing New York, including The Global Alliance for TB (tuberculosis) Drug Development and the International AIDS Vaccine Initiative's (IAVI) AIDS Vaccine Design and Development Lab. Both leverage New York City's status as the crossroads of the world—and the international hub of finance and communications—to carry out their ambitious missions.

New arrivals have long brought new energy and new ideas to the city, starting well before a soaring copper-and-wrought-iron lady with a torch welcomed them in its harbor. The scientific groups putting down stakes today are doing the same, igniting a research renaissance that is rejuvenating well-established institutions. The Rockefeller University, established in 1901, recently launched a Center for Genomic Medicine—which is barely two years old. And Mount Sinai Medical Center, whose roots go back to the 1850s, expanded its clinical and research space by nearly 30% last year with the completion of the Hess Center for Science and Medicine, which promotes a trans-disciplinary approach to patient-centered care.

The research renaissance doesn't peter out once you leave the five boroughs. New York State, spurred in part by the need to replace lost manufacturing jobs, is making its own big bets on science and technology, and drawing national support. A dozen years after its founding in 2001, the College of Nanoscale Science and Engineering (CNSE) of the State University of New York (SUNY) has attracted more than 3,100 scientists, engineers, students, and faculty to its world-class labs, drawing researchers from IBM, Intel, Samsung, Toshiba, and many others.

Albany has not only CNSE but, as of 2010, The RNA Institute, also part of SUNY, which in turn taps the expertise of faculty at the University at Albany School of Business to develop and commercialize new biotechnology in the Capital Region. On Long Island, the Advanced Energy Research and Technology Center is leveraging $45 million from the state to bring together 14 universities, Brookhaven National Laboratory, and telecom companies—among others—to accelerate and commercialize research on solar and wind energy, fuel cells, and the efficiency and security of the electric grid.

In a collaboration that fuses upstate with downstate and medicine with engineering, the Icahn School of Medicine at Mount Sinai Medical Center in Manhattan and Rensselaer Polytechnic Institute (RPI) in Troy signed an agreement last May to build on the institutions' respective strengths—Mount Sinai's in biomedical research and patient care, and RPI's in engineering and invention prototyping.

It's clear from just a quick dive that New York has indeed reclaimed its place as a scientific powerhouse. In the special publication, New York: A Science State of Mind, many of New York's major research institutions have highlighted some of their most exciting new initiatives, those which they expect to further shape the New York science community over the coming decade. They are truly astounding—and will no doubt have implications far beyond the local area.

Articles exploring other facets of New York's science ecosystem—from inter-institutional collaboration to corporate research, philanthropy, global partnerships, and tri-state area innovations—round out the publication, which is dedicated to the researchers and technology professionals, the universities and academic medical centers, the corporations, and the funders who are driving this renaissance. We guarantee you'll be astonished at how New York has indeed become a science state of mind.

Sharon Begley is a science journalist and author in New York.