The 2016 Ross Prize in Molecular Medicine was awarded to Charles N. Serhan, PhD, DSc, who serves as the Simon Gelman Professor of Anesthesia, Perioperative and Pain Medicine at Harvard Medical School and Professor of Oral Medicine, Infection and Immunity at Harvard School of Dental Medicine. Dr. Serhan received the Award, which is conferred by the Feinstein Institute for Medical Research and Molecular Medicine, at a scientific symposium held at the Academy on June 13, 2016, in his honor. A pioneer in the field of inflammation resolution research, Dr. Serhan was the first researcher to identify anti-inflammatory cellular mediators, including resolvins and lipoxins, which are critical in regulating the pro-inflammatory pathway. These discoveries have paved the way for increased understanding of how the resolution of inflammation can be translated into therapies for a variety of human diseases. We sat down with Dr. Serhan to discuss the award, the scope and impact of his research, and the importance of mentorship in developing the next generation of scientists.

What is the current research focus of your laboratory?

CS: The main research focus of the lab is the elucidation of the mechanisms involved in the resolution of inflammation and structural elucidation of the mediators in order to understand organ protection and collateral tissue damage, as this is the basis of many diseases and the collateral stress and damage for surgical interventions.

How did you choose mediators of the inflammatory response as the basis of your work?

CS: I have always been interested in chemistry and biochemistry. The notion of chemical mediators orchestrating the immune response intrigued me from learning about things like histamines and the early prostaglandin research. You could say I have stuck with this research through my entire career, as there were enough questions to ask to go deeper and deeper which led to resolution, which no one had really studied before in a mechanistic fashion.

What was the "eureka" moment, when you realized that your research on these pathway could be used for therapeutic purposes?

CS: It has been a steady progression. I have to say that at one point I did have an epiphany about the whole system—that it was a straight line that has yet to be fully realized, and we could use each one of the mediators we have identified to serve as a backbone for therapeutics. I would say another moment was rewriting the errors in the biochemistry textbooks on how essential fatty acids were actually regulating inflammatory responses. Overall, it has been an incremental process and a lot of slow, hard work—more than one moment. 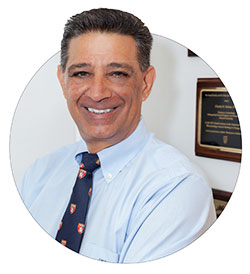 What will be the next injury whose treatment will be influenced by your and others' research in the inflammation field?

CS: The stress of surgery is well recognized among surgeons as an acute inflammatory response, as is reflow injury, when blood reflows to tissue. These are two areas we can have a big impact on. Demonstrations are currently underway at a clinical trial level focused on ocular dry eye inflammation using a resolvin E1 mimetic. This work is based on a company I was involved in starting in 2000, but I am no longer actively involved in this venture.

Additionally, an orphan disease of great public health importance focused on by my lab is periodontal disease, which is inflammation-induced bone loss around the peridontium. We were able to go from a mouse model to a rabbit model thanks to NIH funding and have been able to develop a GMP-synthesis and pro-resolving mouth rinse. A trial is on, with more than sixty people enrolled at the Forsyth Institute, to see if we can stimulate resolution of inflammation in the early stages of periodontal disease. This is being done in collaboration with Tom Van Dyke and his colleagues at the Forsyth Institute, with support from NIH/NIDCR. So I have a focus in my lab on periodontal disease, thinking that if we control local inflammation, what would be the impact on systemic inflammation. There is evidence in a lot of papers showing links to all sorts of systemic diseases resulting from periodontal disease.

What do you hope will be the long-term impact of your research from a global perspective?

CS: One aspect we haven't really touched on, but which is really important, is having a better education about the role of nutrition in an appropriate innate immune response. Some of our work underscores how important fatty acid nutrition is—a different side of our work that is still very important.

Did you always envision yourself as a scientist, or did you dream of being something else as a youth?

CS: As you know, no one really sees themselves as a geek growing up. I really enjoyed chemistry when I was younger, tinkering around with chemistry sets and microscopes, but as I got older really wanted to be a musician. I even spent time on the road touring with bands, but I had a very swift change of heart and went back to my roots, deciding to study biochemistry at Stony Brook, and had a great experience as an undergraduate. Today, I still don't really see myself as a scientist but rather a biomedical investigator. I always have seen scientists as people who work on rocket ships.

"I had great science teachers in elementary school and absolutely loved them and loved science. When I was at graduate school I frequently visited high school science classes and told them how exciting scientific research was."

Do you think your musical training has had any influence on how you approach scientific research?

CS: Yes, most definitely, it does play a role in science. The way I organize the laboratory projects is analogous to orchestration of music. Also, I would compare developing patience, skill and rigor in the scientific process to developing musical skills through continual practice. The more proficient you become mastering scales and rudiments in music, the more confident you become in your skills, and I see scientific research the same way.

Were there any individuals in your life that steered you towards science or played an important role in you becoming a scientist?

CS: Yes, I had great science teachers in elementary school and absolutely loved them and loved science. When I was at graduate school at NYU I frequently visited high school science classes and told them how exciting scientific research was.

Were there any majog challenges you had to overcome in your career to becoming a successful scientist?

CS: Oh yeah, trying to remain continually funded is a real challenge. Other than that, overall, I have been very lucky, having great mentors and a supportive family. I've also had great trainees over the years, with about 90% of them successfully moving on to the next steps in their career.

Speaking of mentors, what is the most valuable lesson that you have learned from your mentors over the course of your career?

CS: Anyone that does reasonably well in science has to have not only one mentor but a half a dozen mentors. I was lucky enough to work with the Lasker Award Winner Michael Heidelberger, the father of immunochemistry, when I started graduate school at NYU, who was retired at the time and in his 80s. I learned two things from him that made a large impact on me: 1. You have to work on something you love to get you through the difficult times, and 2. You have to write everything down and make observations, because you will get distracted and forget things. To this day, I make people in my lab have two notebooks—an electronic one for detailing their experiments and one for writing down their ideas.

What do you hope that your mentees will pass along to their own mentees one day?

CS: Of course, almost everyone would say the passion for experiments, but I would say steadfastness, commitment, and rigor are the key, because there are many things that can lead you astray these days.

What does winning the 2016 Ross Prize in Molecular Medicine mean to you?

CS: I can't even find the words to express it, I am so humbled and makes me very proud. On a personal level it's nice for the people in my lab as they can see something to aspire to.

As the Academy approaches its bicentennial, we're reaching out to top minds in emerging fields to get their opinions on the future of the sciences. What emerging fields do you think are the most exciting?

CS: That's a hard one. There are a lot of emerging areas of science that are exciting. Science drives technology and technology drives science. Lately, I have been working on tissue regeneration, and am interested in nanotechnology and local drug delivery systems, and I believe these approaches will revolutionize medical treatment and improve life. Also, from my perspective, I would say personal metabolomics is another emerging field, which may help us to understand collective health and behavior as well as personalized medicine.

About the Ross Prize in Molecular Medicine

The annual Ross Prize in Molecular Medicine was established in 2013 in conjunction with the Feinstein Institute for Medical Research and Molecular Medicine. The winner is an active investigator who has produced innovative, paradigm-shifting research that is worthy of significant and broad attention in the field of molecular medicine. This individual is expected to continue to garner recognition in future years, and their current accomplishments reflect a rapidly rising career trajectory of discovery and invention. The winner receives an honorarium of $50,000.Previous Award winners include: Lewis C. Cantley, PhD, Weill Cornell Medical College (2015); John O'Shea, MD, National Institute of Arthritis and Musculoskeletal and Skin Diseases (NIAMS), National Institutes of Health (2014); and Dan Littman, MD, PhD, New York University (2013).

For more information, please send an email to rossprize@molmed.org.