From T Cells to Therapies

Following his new award, renowned immunologist Dan Littman explains his fascination with the immune system, as well as his hopes for the future of molecular medicine.

In June 2013, immunologist Dan R. Littman, MD, PhD, received the inaugural Ross Prize in Molecular Medicine at the New York Academy of Sciences. The Ross Prize was established by the Feinstein Institute for Medical Research and Molecular Medicine to honor people whose discoveries change the way medicine is practiced.

According to the prize committee, Littman is an active investigator who produces innovative, paradigm-shifting research. He was recognized for his early discoveries, as well as his ongoing research to better understand viral, immune, and inflammatory diseases.

Below, we present an interview with Littman, who discusses his research, as well as his predictions and aspirations for the field of molecular medicine.

NYAS: What drew you to the field of molecular biology?

DL: I grew up during a time when molecular biology was in its infancy. I was interested in biology in general and I became interested in studying the immune system in college where we had a fantastic course that exposed us to new ideas in this area. We didn't know, at the time, about T cell antigen receptors, and how they specified. So it was around that time that these really fascinating questions that could be addressed by molecular biology techniques started cropping up. In the late '70s and '80s the progress in molecular biology techniques started leading to breakthroughs in many fields, including immunology and virology.

NYAS: How did you get involved in studying the molecular mechanisms of HIV infection? 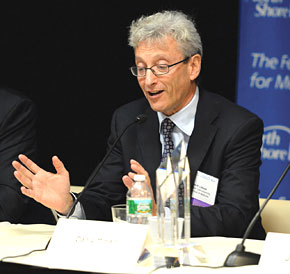 Dan Littman participates in a press briefing following his reception of the Ross Prize in Molecular Medicine.

DL: I got interested in it because of a molecule called CD4 that I discovered in my postdoc. It became clear that it was a receptor for HIV, so we wished to understand how it is exploited by the virus to enter the cell and whether it might be possible to block its function to prevent infection and viral spread. We discovered that CD4 is not sufficient for the virus to enter the cell, but that a second molecule, CCR5, is also required on the cell surface for virus infection. A drug that binds to CCR5 and blocks HIV infection has been developed. It's not widely used today because it's not the most effective therapy, but it can be used for those patients whose infection is refractory to the commonly used anti-retroviral drugs.

Our interest has shifted over the years as we try to understand how the virus depletes the cells of the immune system. Most people with HIV can mount an anti-viral immune response, but it's not sufficient to eradicate the virus. Even people who are controlled with medication have a residual reservoir of HIV-infected cells. That reservoir often becomes reactivated once people go off therapy. The question is whether we could get rid of the reservoir, thereby curing patients of HIV.

Also, can there be a protective vaccine? We are still interested in contributing to this important goal, and our work has been focused recently on trying to understand how the virus evades a branch of the immune system called the innate immune response. The virus does have an Achilles heel, but this Achilles heel is very well concealed as far as it is recognized by the innate immune system. We want to understand how to uncover it in people who are already infected with the virus or are given a prophylactic vaccine. If we can do that, we may be able to elicit much stronger anti-viral immunity.

NYAS: What is your current research focus?

DL: The problems that are energizing me the most have to do with how the immune system is shaped to be able to deal with various environmental stresses and microbial challenges. We are trying to understand how the different branches of the immune system are kept in a homeostatic state in which they are ready to handle any kind of environmental threat, but at the same time, avoid being overly activated— as occurs in autoimmunity or inflammation.

The way we got to this is through our research of T lymphocytes, which are needed for establishing an adaptive microbial response to pathogens. We discovered a particular type of T cell in the intestine, where there is an enormous number of microbes that are required for these cells to appear. We have co-evolved with this commensal microbiota, which provides many benefits to us. There must be a balance where there is no threat to the host or to the microbiota. This evolutionary pas de deux is what we are interested in, from the point of view of the immune system.

NYAS: What did your research on T cells teach you about autoimmune diseases and their relation to the microbiota?

DL: In the process of studying T lymphocytes we found that there is a particular type that can be especially inflammatory and can cause tissue damage. These T cells are involved in autoimmune diseases, like rheumatoid arthritis (RA), multiple sclerosis (MS), and inflammatory bowel diseases like Crohn's disease, but they are also important for protecting the mucosal barrier. It's important that these T cells be kept in balance. If there is a shift in the microbiota, called dysbiosis, it can result in these T cells becoming harmful to the host.

This theory has been fully established in animal models, and now there's some evidence in humans. We now have some hints that RA is associated with dysbiosis and that there may be particular bacteria that may be responsible for eliciting T cells that attack our own cells (within the joints, in RA). We think that there is a good possibility that this is precipitated by an imbalance in the intestinal microbiota.

NYAS: How could further research on the microbiota impact disease treatment?

The hope is that in the future we will have a much better definition of the components of the microbiota and how they interact with the epithelial barrier and the immune system. This would allow us to essentially create and deliver a formula of specific bacteria to target certain diseases.

DL: Right now, we're at a very early stage. We have over 1,000 different types of bacteria that compose our intestinal microbiota and we know the functions of only a handful of them. Is it possible to rebalance the microbiota? Interventions like fecal transplantation do so, and are actually a highly effective way of treating certain types of infection and may also be effective in treating inflammatory diseases.

The hope is that in the future we will have a much better definition of the components of the microbiota and how they interact with the epithelial barrier and the immune system. This would allow us to essentially create and deliver a formula of specific bacteria to target certain diseases.

We think of the impact of this on classical autoimmune diseases, like MS and type 1 diabetes, but it's very likely that this extends much further to other diseases that can be impacted by inflammatory processes, like Alzheimer's disease, atherosclerosis, and possibly even behavioral disorders. We think that this type of research could have far-reaching implications.

NYAS: What pressing question has yet to be answered in the field of molecular biology?

DL: We still don't understand fundamentally how the development of an organism occurs. Stem cell research is a huge exciting field these days, and it pertains to how an entire organism can be derived from a single cell (a zygote). The mechanisms by which organisms regulate their size and their function throughout a lifetime are things we don't yet have a great grasp on.

One of the interests in our lab, and to biologists in general, is how interaction with the environment affects developmental and physiological processes, such as the onset of chronic diseases that can be precipitated by infection or induced stress. We want to know how the environment changes the expression of genes.

The big advances in the past 30 years have come from cell biology and understanding how genes work, but whole organism physiology has taken a backseat, and for good reason—we haven't yet had the tools to study it in the ways that we can study cell biology.

NYAS: Where do you see the field of molecular medicine in 20 years?

DL: I think the technology is moving forward very fast with regard to genomics and detecting and identifying molecules relevant to disease processes. There will be much more rapid and precise molecular diagnosis, through both genetic approaches (identifying genetic lesions) and metabolomics, and hopefully better interventions as we better understand how these relate to disease.